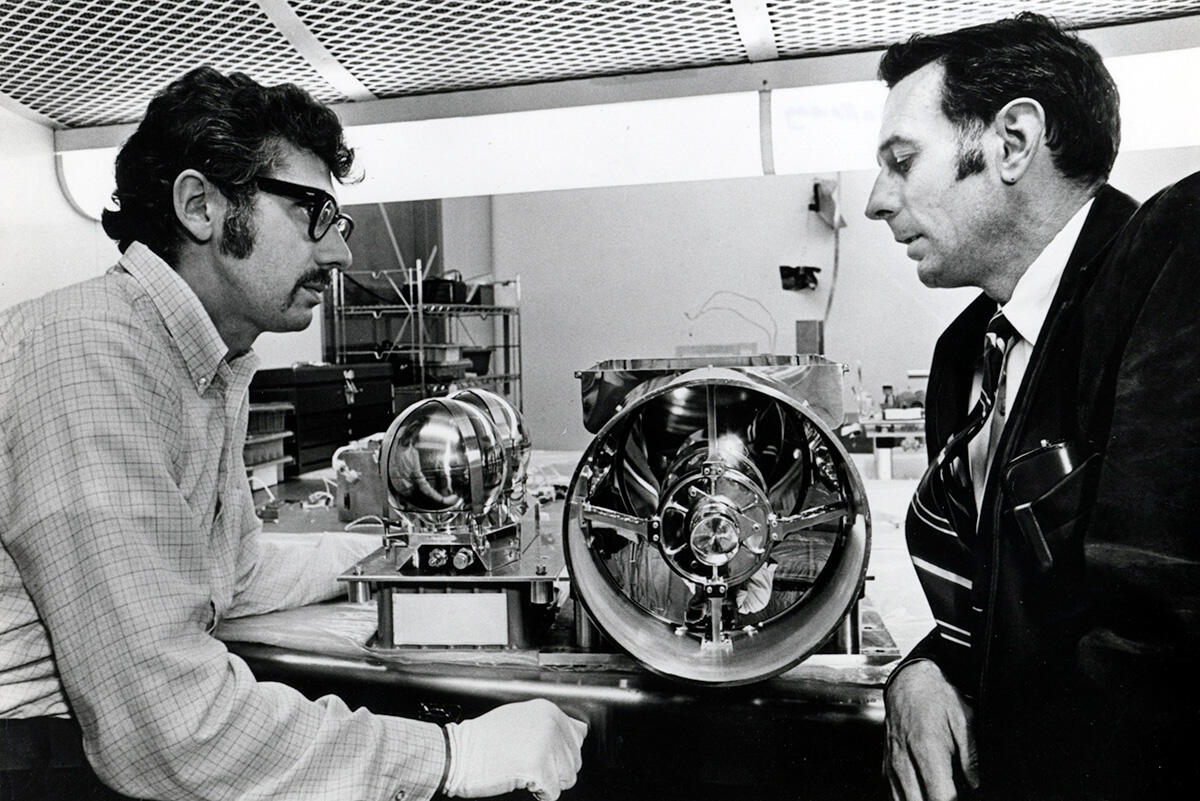 Image: (l to r) Kenneth Herr and George Pimentel discuss production of the infrared spectrometer that was placed on the Mars Mariner 6 and 7 spacecraft that went to Mars in 1969 and discovered that there was water on the planet. (Photo: College of Chemistry)

George Pimentel (1922-1989) was a native of California. Born May 2, 1922, in the Central Valley to French parents, he grew up in a poor section of Los Angeles and, after finishing high school in 1939, worked his way through a chemistry major at UCLA. Graduating in 1943, he came north to join the Manhattan Project at UC Berkeley. When he grasped the full implications of the project, however, he enlisted in the Navy and volunteered for submarine duty in the hope of hastening the war's end. In 1946 he returned to Berkeley for graduate work in infrared spectroscopy under the supervision of Kenneth Pitzer. Upon receipt of his Ph.D. in 1949, he joined the Berkeley faculty, of which he remained an active member until his death.

During the 1950s George developed the matrix isolation technique to trap free radicals, preventing their loss through chemical reaction and thus allowing spectroscopic study. Throughout the world, that technique has led to the discovery of many highly reactive molecules. Infrared spectroscopy also enabled George himself to advance our understanding of hydrogen bonding, a central feature of all biological chemistry.

In the mid 1960s, George's study of fast reactions unlocked the secret for converting chemical energy directly into laser light. The chemical laser has since taught us much about chemical reactions and about the transfer of energy among molecules. It has also been developed into large and powerful laser systems. Meanwhile, George's high-speed infrared spectroscopic techniques proved adaptable to the devising of instruments for remotely determining the composition of the atmosphere and surface of Mars. Spectrometers constructed and assembled in his laboratories yielded dramatic findings in the space missions of Mariners 6 and 7 in 1969 including the discovery of water on Mars.

In 1967, at the age of 45, George applied to become a scientist-astronaut. After the most demanding of physical and intellectual tests, the National Academy of Science ranked him first among its thousand or so applicants. Only the discovery of a minor abnormality in one retina prevented him from joining NASA's program. A fellow applicant, who fondly remembered George's warmth and enthusiasm, recalled that when George was asked how he would react to the prospect of a two-year, high-risk trip to Mars, his instant reply was, “Where do I sign up?” 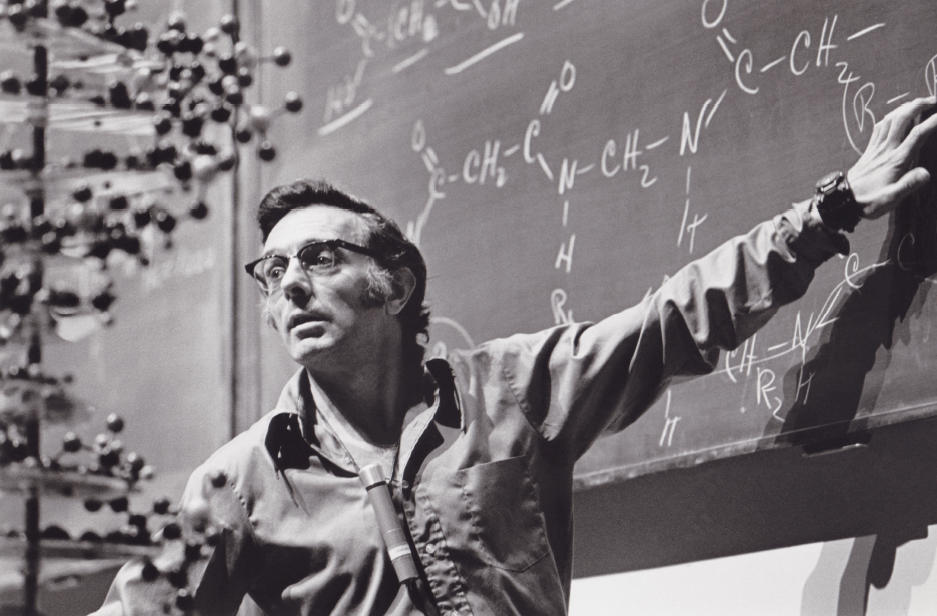 George was also well known for his contributions to science education through the CHEM STUDY project, a national effort to improve high-school chemistry teaching. He participated in the production of films and other supplementary materials and in the training of teachers nationwide.

George was also an outstanding leader. On the Berkeley campus, he served as director of the Laboratory of Chemical Dynamics and as associate director of the Lawrence Berkeley Laboratory. He spent the years 1977 through 1980 in Washington as deputy director of the National Science Foundation, where he significantly raised awareness of the need for funding and public understanding of scientific research. In 1986 he was president of the American Chemical Society.

George was born in 1922 and passed away in 1989. He would have turned 100 this year on May 2nd. An in depth biography about George written by professor emeritus Bradley Moore is available on the National Academy of Sciences website.