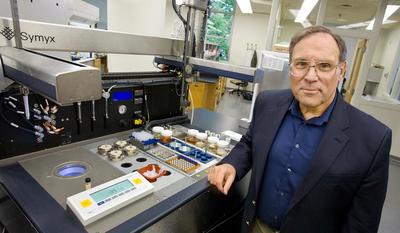 On the occasion of Dow Professor of Sustainable Chemistry Alexis T. Bell’ s fiftieth year at Berkeley, a group of Alex's former Ph.D. and postdoc students, have created a high-level career summary of his substantial research.

With currently around 700 papers and 180 students and postdoctoral associates, his career to date spans a broad and important set of research problems. Their aim was to share a representative set of vignettes, a window into Alex’ s approaches and patterns that, illustrate his enduring impact on the field. These are arranged roughly chronologically, addressing chemical vapor deposition, characterization of catalysts and catalytic processes, CO hydrogenation on supported metals, zeolite synthesis and design, partial oxidation on metal oxides, and quantum mechanical and statistical mechanical computation.

“Taking to heart the message over Latimer lecture hall, that ‘progress in science is based on advances in instrumentation’, he built a state-of-the art laboratory for probing the active sites on catalysts. Alex’s entry in the field of catalysis was occasioned, in part, by his interest and expertise with in situ infrared (IR) spectroscopy, employed during absorption and reaction of NO and CO on supported precious metal catalysts.” 1

A hallmark of Alex’s research program was to bring together the best researchers and to share their ideas on how to tackle the many unanswered questions in catalysis. The Bell and Somorjai groups met weekly at Lawrence Berkeley National Laboratory to discuss their latest achievements. Structure sensitivity, intrinsic kinetics, and catalyst design were often the focus of these meetings.

Starting in the mid-1980s, Alex collaborated with Clay Radke, advising several students in projects to understand the hydrothermal synthesis of zeolites, with special attention to using the best tools available to gain insight into what governs the structure direction of zeolite and molecular sieve synthesis. The emphasis was on understanding the process at the molecular level, with an eye to learning how to direct and engineer catalyst sites with molecular control.

One is hard pressed to find either a catalytic moiety or a catalytic reaction that Alex has not touched. Still, certain thematic trends reappear more often than others. One particular family of catalytic materials that have yielded productive investigation spanning four decades has been supported vanadates, including collaboration with Enrique Iglesia to investigate the kinetics and mechanism for oxidative dehydrogenation of propane, and collaboration with T. Don Tilley to develop techniques for better control of deposition and anchoring of isolated vanadates on metal oxide surfaces. The ability to generate catalytically active sites with structural uniformity using isolated vanadates that developed from these studies allowed Alex to expand his effort in the area of “single-site heterogeneous catalysis” as applied to the oxidation of methanol to formaldehyde.

From the end of the 1980s on, Alex’s work gradually included more computational, quantum and statistical mechanical simulations to complement experimental work. As computers became more powerful, this was not a digression, but a natural expansion to achieve his overall objective to understand those fundamental underpinnings of catalysis that could be translated to the context of practical applications, for the purpose of catalyst development and design.