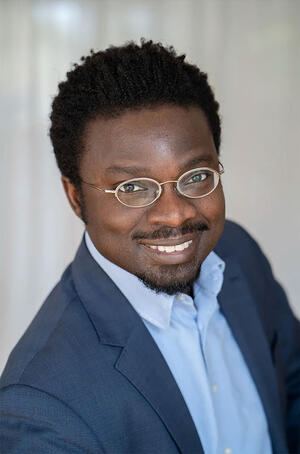 Richmond Sarpong from the College of Chemistry received the 2021 Edward Leete Award on Thursday for his research and teachings within the field of organic chemistry.

The Edward Leete Award acknowledges exceptional teaching and research contributions in the field of organic chemistry, according to the American Chemical Society, or ACS, website. The award is named after Edward Leete, who researched alkaloid biogenesis using methods available in the mid-20th century, and whose work continues to be featured in nearly 250 publications.

“It’s a high honor for me to be recognized both for research and teaching because I view myself as a teacher first, and as a community we need to value teaching even more,” Sarpong said. “To me, this award exemplifies that combination which I think is very important, and, of course, I’m thankful to my students who are a very important part of what we do.”

Sarpong grew up in Ghana, West Africa and became interested in chemistry after witnessing the effectiveness of the drug ivermectin in combating river blindness in his own community.

He went on to study at Macalester College, later doing his graduate work with Martin Semmelhack at Princeton University.

“One of the things I really appreciate also, as somebody from an underrepresented group, is that I think this can shine light on me as perhaps a role model for students from underrepresented groups,” Sarpong said. “I hope to use that time in the limelight to really encourage others into research and teaching.”

As a testament to his dedication to teaching, Sarpong has received several awards for chemistry instruction. He was the recipient of the 2009 UC Berkeley Department of Chemistry teaching award and campus’s 2016 Donald Sterling Noyce Prize for Excellence in Undergraduate Teaching in the physical sciences, according to his website.