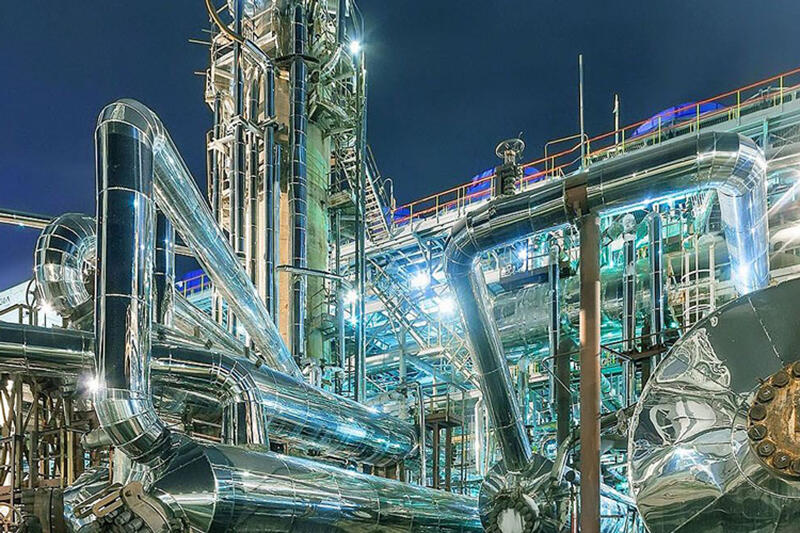 A chemical plant that produces ammonia, most of which goes into making fertilizer. (Photo via UC Berkeley)

Industrial production of ammonia, primarily for synthetic fertilizer — the fuel for last century’s Green Revolution — is one of the world’s largest chemical markets, but also one of the most energy intensive.

Globally, the Haber-Bosch process for making ammonia uses about 1% of all fossil fuels and produces 1% of all carbon dioxide emissions, making it a major contributor to climate change.

A major stumbling block to making ammonia with less energy input has been separating the ammonia from the reactants — primarily nitrogen and hydrogen — without the large temperature and pressure swings required by the Haber-Bosch process. That reaction takes place between about 300 and 500 degrees Celsius, but ammonia is removed by cooling the gas to approximately -20 C, at which point the gaseous ammonia condenses as a liquid. The process also requires pressurizing the reactants to about 150-300 times atmospheric pressure. All this takes fossil fuel energy.

Alternative methods for ammonia separation could open the door to alternative processes operating under less extreme conditions. To address this problem, UC Berkeley chemists designed and synthesized porous materials — metal-organic frameworks, or MOFs — that bind and release ammonia at moderate pressures and temperatures around 175 C. Because the MOF doesn’t bind to any of the reactants, the capture and release of ammonia can be accomplished with smaller temperature swings, thus saving energy.

“A big challenge to decarbonizing fertilizer production is finding a material where you can capture and then release very large quantities of ammonia, ideally with a minimal input of energy,” said UC Berkeley postdoctoral fellow Benjamin Snyder, who led the research. “That is to say, you don’t want to have to put a lot of heat in your material to force the ammonia to come off, and likewise, when the ammonia absorbs, you don’t want that to generate a lot of waste heat.”

One key advantage of a process that operates at lower temperatures and pressures is that ammonia, and thus fertilizer, could be produced at smaller facilities closer to farmers — even onsite at the farm — rather than at large, centralized chemical plants.

“The dream here would be enabling a technology where a farmer in some economically disadvantaged area of the world now has much more ready access to the ammonia that they need to grow their crops,” Snyder said. “To be clear, our material hasn’t gone and solved that problem outright. But we’ve put forward a new way of thinking about how you can use metal-organic frameworks in the context of ammonia capture for a modified Haber-Bosch process. I think this study represents a really important conceptual advance in that direction.”

Snyder and Jeffrey Long, the paper’s senior author and a UC Berkeley professor of chemistry and of chemical and biomolecular engineering, published the details of their MOF study this week in the journal Nature. This month, Snyder joined the chemistry department at the University of Illinois Urbana-Champaign as an assistant professor.

“This work is of fundamental importance because it reveals a new cooperative mechanism for selective gas capture,” said Long, the C. Judson King Distinguished Professor at UC Berkeley and a faculty scientist at Lawrence Berkeley National Laboratory. “We are optimistic that the mechanism will extend to other molecules of industrial significance that have a strong affinity for binding metals.”

According to Snyder, many researchers are working on ways to make the Haber-Bosch process — which dates from the early 20th century — more sustainable. This includes producing one major reactant, hydrogen, using solar power to split water into hydrogen and oxygen. Today, hydrogen is typically obtained from natural gas, which is mostly methane, in a reaction that releases carbon dioxide, the dominant greenhouse gas. 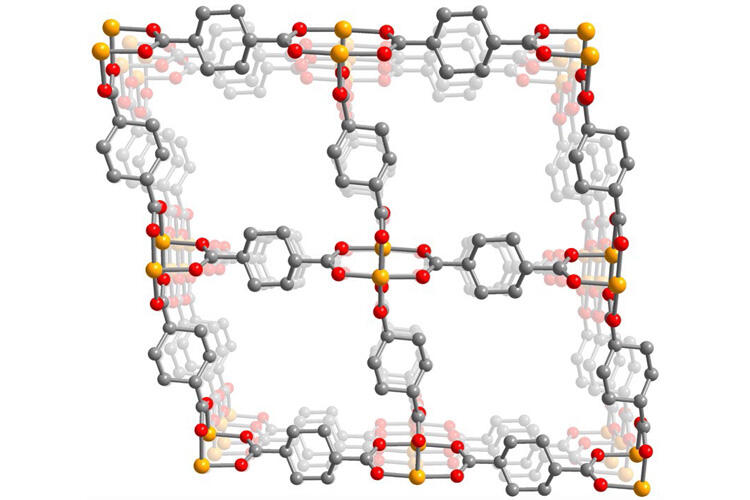 A cross-section through a porous metal-organic framework, showing the copper atoms (orange) that are constrained in a rigid structure by organic linker molecules, cyclohexanedicarboxylate, that contain oxygen (red) and carbon (gray). Ammonia cleaves the copper-oxygen bonds in this 3D framework, causing it to transform into a one-dimensional polymer. The porous, 3D framework then reassembles itself as ammonia is driven off. (Illustration courtesy  Jeffrey Long lab, UC Berkeley)

Other green modifications include novel catalysts that operate at lower temperatures and pressures to react hydrogen with nitrogen — typically captured from the air — to form ammonia, NH3.

But removing ammonia from the mixture after the reaction has remained difficult. Other porous materials, such as zeolites, are unable to absorb and release large quantities of ammonia. And other MOFs that people tried often disintegrated in the presence of ammonia, which is highly corrosive.

Snyder’s innovation was to try a relatively new variety of MOF that employs copper atoms linked by organic molecules called cyclohexanedicarboxylate to create the rigid and highly porous MOF structure. To his surprise, ammonia didn’t destroy this MOF, but converted it into strands of a copper and ammonia-containing polymer that has an extremely high density of stored ammonia. Moreover, the polymer strands easily gave up their bound ammonia at relatively low temperatures, restoring the material to its initial rigid, porous MOF structure in the process.

“When you expose this framework to ammonia, it completely changes its structure,” he said. “It starts as a porous, three-dimensional material, and upon being exposed to ammonia, it actually unweaves itself and forms what I would call a one-dimensional polymer. Think of it like a bundle of strings. This really unusual adsorption mechanism allows us to uptake huge quantities of ammonia.”

In the reverse process, he added, “the polymer somehow will weave itself back into a three-dimensional framework when you remove the ammonia, which I think is one of the most arresting features of this material.”

Snyder found that the MOF could be tuned to absorb and release ammonia under a large range of pressures, making it more adaptable to whatever reaction conditions turn out to be best for producing ammonia most efficiently from sustainable reactants.

“The benefit of our MOFs is that we’ve discovered that they can be rationally tuned, which means that if you end up locking in on a certain set of reaction conditions in a specific process, we can modify the MOF’s performance parameters — the temperature that you use and the pressure that you use for this adsorbent — to closely match up with the specific application.”

Snyder emphasized that ammonia capture is just one part of any modified process to make greener ammonia, which is still a work in progress.

“There are lots of smart people thinking about catalyst and reactor design for a modified Haber Bosch process that’s designed to operate under more moderate temperatures and pressures,” Snyder said. “Where we come in is, after you’ve made the ammonia, our materials are what you would try to use to separate and capture the ammonia under these new reaction conditions.”

The research was supported by the U.S. Department of Energy Office (DE-SC0019992).