Elements on the periodic table that make up the lanthanides, or rare-earth heavy elements.

Lanthanides are rare-earth heavy metals with useful magnetic properties and a knack for emitting light. Researchers had long assumed that lanthanides’ toxicity risk was low and therefore safe to implement in a number of high-tech breakthroughs we now take for granted: from OLEDs (organic light-emitting displays) to medical MRIs and even hybrid vehicles.

In recent years, however, some scientists have questioned lanthanides’ safety. In matters concerning health care, for example, some MRI patients have attributed a litany of side effects, including long-term kidney damage, to their exposure to the lanthanide gadolinium, a commonly used MRI contrast agent. And in the wake of landmark studies showing that gadolinium-based contrast agents (GBCAs) linger in patients’ kidneys, bone and brain tissue for months if not years, scientists have searched for clearer evidence linking lanthanide exposure to disease.

But what’s slowing scientists down is that they don’t know where to start – there are 15 lanthanide elements, and the human genome consists of billions of nucleotide sequences. Understanding how lanthanides might trigger gene mutations associated with cancer and other diseases would require a dataset of mammoth proportions that doesn’t yet exist. 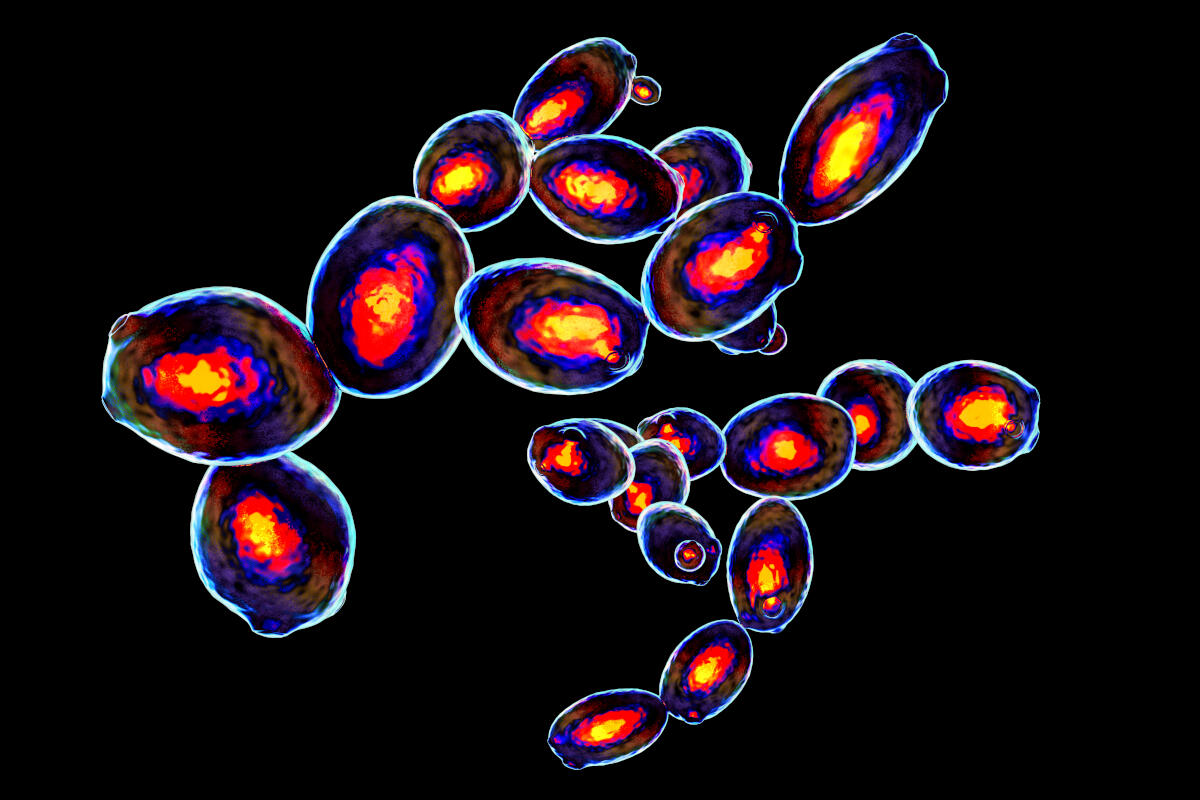 Illustration of baker’s yeast. Berkeley Lab’s Rebecca Abergel and her research team have compiled a library of lanthanides and their potential toxicity by exposing baker’s yeast to lanthanide metals. (Credit: Kateryna Kon/Shutterstock)

Now, a team of researchers led by the Department of Energy’s Lawrence Berkeley National Laboratory (Berkeley Lab) and UC Berkeley has compiled the most complete library yet of lanthanides and their potential toxicity – by exposing baker’s yeast, aka Saccharomyces cerevisiae, to lanthanide metals. Their findings were recently published in the journal Proceedings of the National Academy of Sciences.

Like us, yeasts are eukaryotes – organisms made up of membrane-bound cells whose chromosomes are neatly packaged in a nucleus. We are made up of tens of trillions of cells; yeasts are just one cell.

“Yeast is the smallest eukaryote – but their thousands of genes represent a great approximation to the gene variants in humans,” said senior author Rebecca Abergel (Ph.D, '06, Chem), who holds titles of faculty scientist in the Chemical Sciences Division at Berkeley Lab, where she heads the BioActinide Chemistry Group, and assistant professor of nuclear engineering at UC Berkeley. “What’s cool about this study is that it was done with a library of yeast genes, and we could screen the whole genome of the yeast and compare how a normal gene strain versus a gene-deletion strain was actually affected by lanthanide exposure.”

In an investigation spanning nearly a decade, Abergel and her team relied on a barcoded library of the baker’s yeast genome to screen which cellular functions were disrupted by lanthanides. The library was developed in the early 2000s as part of the Yeast Deletion Project, a consortium of researchers across the U.S. and Canada, to establish relationships between genes and chemical exposures. Co-senior author Christopher Vulpe, a professor of physiological sciences at the University of Florida, is one of the early adopters of this library for functional profiling of various toxicants.

After testing over 4,000 genes against 13 of the 15 lanthanide metals (the study excluded cerium and promethium), the researchers found that lanthanides interrupt the cell-signaling pathways that keep our bodies functioning – such as our skeletal and neurological processes – by hijacking calcium-binding sites in two key cellular activities: endocytosis, the process that governs how nutrients are imported inside the cells, and the ESCRT (endosomal sorting complexes required for transport) machinery, which sorts proteins and helps cells shuttle in critical nutrients like calcium.

“This study could point us to understanding which lanthanide metals are more toxic than others, and whether someone is more genetically predisposed to lanthanide toxicity,” Abergel said.

Abergel’s investigation of baker’s yeast as a genomic model for human disease began in 2012, when she was awarded a Berkeley Lab LDRD (Laboratory Directed Research and Development) Award for her study titled “Global transcriptome, deletome and proteome profiling of yeast exposed to radioactive metal ions: a tool to distinguish radiation-induced damage from chemical toxicity.” Her interest in public health then led to the development of an anti-radiation-poisoning pill, an anti-gadolinium-toxicity pill for MRI patients, and advances in cancer therapies and medical imaging.

As a follow-up to the current study, she and her research team are now studying the toxicity mechanisms of each specific metal, beginning with gadolinium. They also hope to investigate in animal models how cellular abnormalities caused by lanthanide exposure are sustained over time – and possibly even across generations.

“This was a massive study showing all the potential pathways affected by lanthanide metal exposure – but we’re just scratching the surface of a huge dataset” and there’s much more work to be done, she said.

This work was supported by DOE’s Laboratory Directed Research and Development Program. Additional support was provided by generous donations from anonymous donors through the Berkeley Lab Foundation.