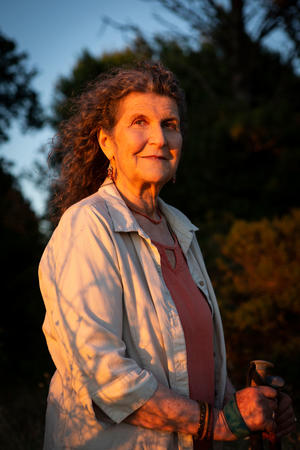 Among the technical and sometimes arcane-seeming debates at this year’s meeting of the International Code Council was one that grew surprisingly emotional: whether building codes should allow the use of polystyrene insulation not treated with flame retardant in foundations, below a 3.5-inch concrete slab. At stake was a larger argument about whether some volatile elements, including bromine, are safer for human health if they’re part of longer chains of molecules. On one side were some of the chemical industry’s most powerful companies. On the other was 74-year-old chemist and activist Arlene Blum (Ph.D. '71, Chem) who is currently a research associate in chemistry at UC Berkeley and executive director of the Green Science Policy Institute..

Blum is an accomplished mountaineer—she led the first all-women expedition to scale the Himalayan massif Annapurna in 1978—and sometimes describes her professional trials in those terms. In 1977 she identified a brominated flame retardant called Tris as a likely carcinogen, leading to a ban on Tris-treated kids’ pajamas. That was a relatively easy climb, at least compared with persuading international standards setters in 2008 not to impose regulations that would have put hundreds of millions of pounds of flame retardants in the casings of TVs, printers, and other household electronics. That, Blum, says, “was harder than Annapurna.”

Most bromine comes from the Dead Sea, as a byproduct of the production of potash, an essential ingredient in fertilizer. It’s useful for rubber production, oil and gas drilling, and pesticides, but its main use is in flame retardants. Albemarle, Lanxess, BASF, and DuPont all make these retardants or products that contain them, and that puts them in opposition to Blum. She “has opposed the use of chemical flame retardants in virtually every application and circumstance,” a spokesman for DuPont says. The EPS Industry Alliance, which represents makers of expanded polystyrene, calls Blum’s work “alarmist.”

After her research led to the elimination of Tris from children’s pajamas, Blum dedicated most of the next three decades to mountaineering, raising her daughter, and writing a memoir. The number and uses of flame retardants increased steadily during that time, however, and in 2008 she returned to science, founding the Green Science Policy Institute. Her advocacy paid off in 2017, when the U.S. Consumer Product Safety Commission issued what seemed like a blow to the chemical industry, voting to ban organohalogen flame retardants—those containing bromine and chlorine. It also recommended that consumers ask retailers for products without them. The commission made one exception: flame retardants that used polymers, atom chains that form larger molecules.