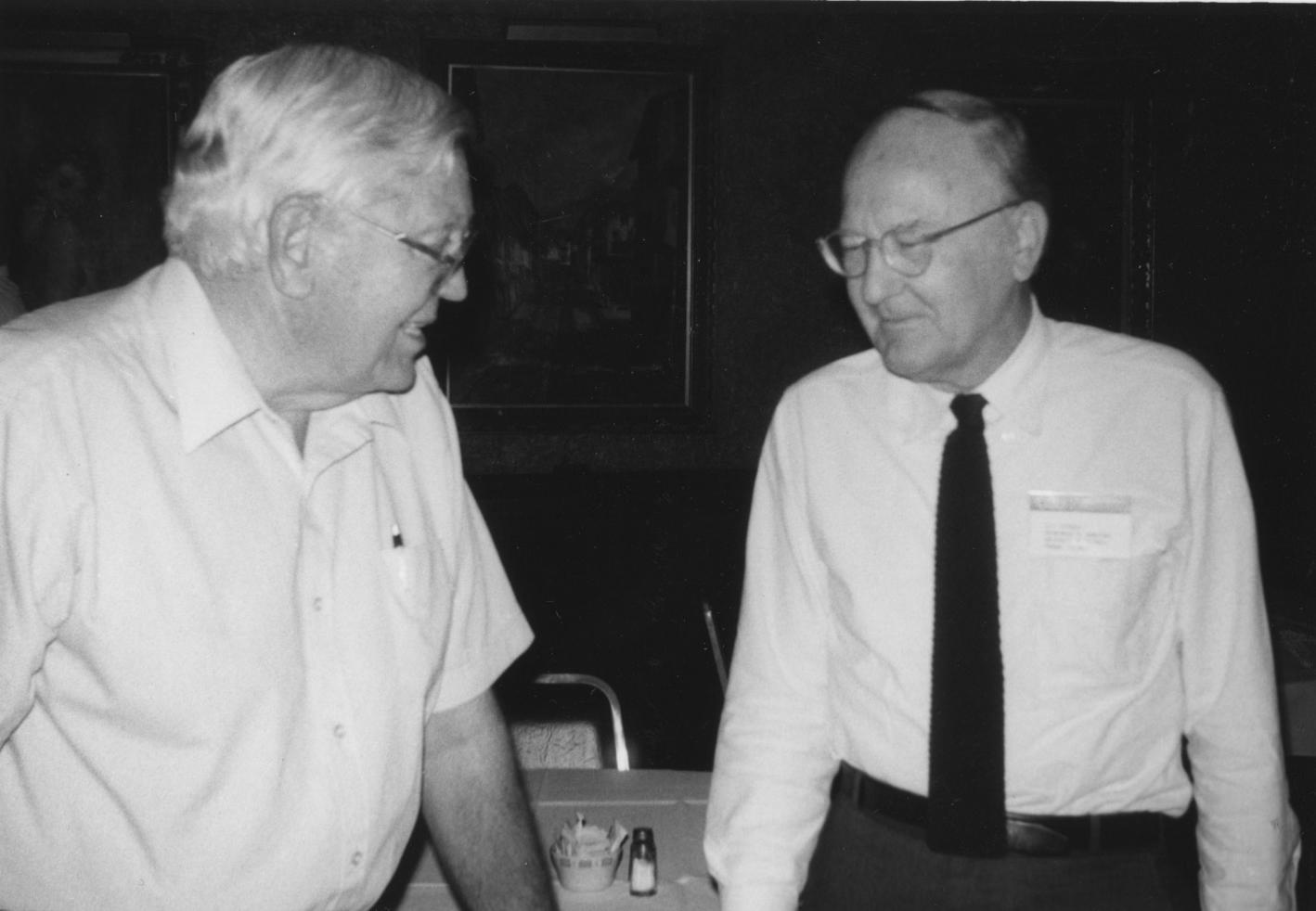 William Dulaney Gwinn died from a stroke on May 5, 1997. He came to the University as a graduate student in 1939 to begin a long and distinguished association with the Berkeley campus. He was born in Bloomington, Illinois, in 1916. Most of his formative years were spent in Slater, Missouri, where he attended elementary and high school. He received an A.B. in 1937 and an M.A. in 1939, both from the University of Missouri, where he worked with a young professor, Lloyd Thomas. Gwinn excelled in mathematics but working with Thomas instilled in him a great interest in experimental physical chemistry. When he came to Berkeley in 1939, he chose to work with Kenneth Pitzer on gas heat capacities for his Ph.D. research.

A few years earlier, Pitzer had interpreted the low-temperature heat capacity of ethane, CH3CH3, in terms of the energy barrier of the methyl groups to internal rotation. Gwinn worked on the theory of internal rotation and measured the barriers to internal rotation of a number of molecules. He published four papers with Pitzer covering both theory and experiment. He received a Ph.D. in 1942 and was appointed as an Instructor of Chemistry in Berkeley the same year.

He immediately became heavily involved in war-related work. As a result, he was on leave in 1943 and 1944 and spent considerable time off campus, testing how gases released in the atmosphere might distribute under various atmospheric conditions. He returned to campus in 1945 as an Assistant Professor and started to establish a research program. His first post-war papers were on Raman spectroscopy, and his first Ph.D. student, J. R. Thomas, received his degree in 1947 after obtaining barriers to internal rotation from gas dielectric constants. This work was followed in 1948 by J. T. Neu's thesis involving Raman spectroscopy.

At the same time Gwinn became interested in the new spectroscopy, which could now be done in the microwave region. He took on a student from engineering and collected surplus microwave apparatus originally built for war-time radar. This work involved a considerable amount of vacuum-tube electronics and the handling of microwave radiation. At first they tried to detect the absorption in long lengths of waveguide, but by then Stark modulation was developed and special waveguides containing an electrode that would still allow the transmission of microwaves had to be constructed. His first microwave papers involved the rotational spectrum of various isotopes of the three-membered ring molecule, ethylene oxide, and were published in 1948 and 1949. The Stark effect was essential for the identification of the absorptions in such a complicated spectrum. With the rotational constants obtained by the use of several isotopes he could obtain a molecular structure with precise bond distances and bond angles for this interesting molecule. Other microwave-based structure papers had appeared before this one, but ethylene oxide was the first molecule to be studied that was not a simple linear or nearlinear molecule or symmetric top such as methyl chloride. The theory of the rotational energy levels of asymmetric tops, such as ethylene oxide, is quite complex and most other workers did not want to take on this much mathematical complexity. Characteristically, Gwinn was undaunted.

Over the next 25 years he published over 30 papers on results from microwave spectra, and had 28 Ph.D. students with theses on this subject. In addition, he had 10 Ph.D. students who worked on theory or other experimental molecular-structure techniques. The molecules studied with microwaves had a variety of complexities. They ranged from rigid molecules, often with nuclear quadrupole interactions yielding bonding information, to molecules with motions such as internal rotation or ring-puckering, as found in five-membered rings, which yielded internal potential energy functions. These studies resulted in detailed information about structure and internal motion never obtained before. In addition to ethylene oxide, the list of molecules studied by Gwinn and his students includes ethylene sulfide, methylene chloride, ethyleneimine, trimethylene oxide, nitromethane, formyl fluoride, dichlorocyclopropane, tetrahydrofuran, dichloroethane, dichloropropene, sulfur tetrafluoride, trifluoronitromethane, methyl nitrate, cyclobutene, chlorocyclobutane, formic acid, difluorocyclopentane, chloroziridine, methyl nitrite, ethyl isocyanide, trimethyleneimine, ortho-fluorotoluene, dimethyl thietane and boranediamine.

Gwinn had broad interests and became involved in the use of computers for data acquisition long before the development of small integrated-circuit personal computers. An SDS-910 was acquired by the College of Chemistry in 1962 and he became heavily engaged in adapting it for general college use. This was a pioneering effort, but it was eclipsed by the rapid changes in computer technology. Nevertheless, he became very interested in using computers for solving vibrational modes in molecules. The classical methods depended a great deal upon symmetry to minimize arithmetic. His now classical paper on this subject was written while he was on sabbatical at the University of Minnesota and was published in 1971. He had published two previous papers, with students as co-authors, in 1965 and 1966 with the objective of establishing a method for solving for the effects of low-frequency vibrations on microwave spectra. Their method, now very popular, is called the discrete variable representation. During 1997, these three papers together were still cited more than 500 times according to the Current Contents database. Another frequently cited paper was published in the Journal of Astrophysics in 1973. Gwinn became very interested in the unusual emission from interstellar OH radicals. He and a postdoctoral fellow worked with two astronomers on the theory of the production of these radicals and on the nature of the maser emission. Gwinn's contribution was the chemistry of the dissociation of water and the orientation of the rotation of the OH that would result from this process.

Gwinn started his teaching in the physical chemistry laboratory and he and George Jura revised it completely. Even today, this course is still largely that which they designed. He later taught quantum mechanics to generations of chemistry graduate students and he was best known as the teacher for this course. He served on the Budget Committee from 1959-61, but he much preferred research to administrative activity. He interacted particularly well with graduate students and he was fondly regarded by his Ph.D. students. He loved to work with his hands and this included remodeling his house, working with electronics, scientific glass blowing, sailing, and playing in a string quartet. He leaves his wife, Margaret, and their three children, Robert, Ellen and Kathleen.