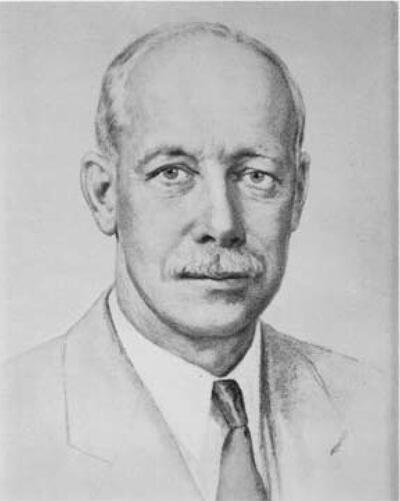 William Crowell Bray, Professor of Chemistry at the University of California, died February 24, 1946, after he had apparently been recuperating from an illness of several months.

During World War I he directed research at the Experimental Station, American University, Washington, D.C., and in 1919 was Associate Director of the Fixed Nitrogen Research Laboratory.

Professor Bray was a member of the National Academy of Sciences, the American Chemical Society, the American Association for the Advancement of Science, the American Academy of Arts and Sciences, and the Electrochemical Society. The major portion of his scientific effort has been concerned with the mechanisms of inorganic oxidation-reduction reactions in aqueous solutions, a field in which he became the leading authority and the trainer of a limited number of able students as the heirs of his knowledge and methods. Other notable contributions include the authoritative Qualitative Analysis for the Rare Elements, with A. A. Noyes; a pioneering paper on “The General Relation between the Concentration and the Conductance of Ionized Solutions in Various Solvents” , with C. A. Kraus; and “The Catalytic Oxidation of Carbon Monoxide” , with several co-workers, which has made possible the construction of a gas mask to protect against this gas.

He has had a profound influence upon the teaching of inorganic chemistry in the University of California, from the freshman to the graduate years. The Course in General Chemistry by Bray and Latimer has for many years, with frequent revisions, been the laboratory manual for the freshman course in general chemistry and qualitative analysis, in the teaching of which he annually participated by taking charge of a section of twenty-five A-grade students. He labored just as conscientiously over these freshmen as he did over his advanced students.

But it would be less than a fair appraisal to contend that his qualities as a teacher could be fully described by the words, “conscientious,” “thorough,” “painstaking.” It is true such qualities were always present, but the chill of cold efficiency which they connote was tempered, indeed removed, by the humanness, the sympathetic understanding and the warm personality of the man within. Students were more to him than human beings to be drilled and disciplined; they too were personalities. His students knew him as one just in his demands, fair in his appraisals, and warm in his understanding.

Dr. Bray came to the University as one of the initial group of chemists assembled by the late Professor G. N. Lewis at the time of his appointment as directing head of the Department of Chemistry. Professor Lewis did not come to the University to direct another department of chemistry; he saw the possibilities of developing on this campus a great chemical center. It was this thought and plan that governed the selection of those who were to build the new Department. Professor Bray, as one of these, proved a wise choice. His good judgment and sound advice greatly influenced the policies of the Department. As the Department expanded in size and grew in distinction his counsels and his constant adherence to high standards proved steadying influences. These contributions were no less valuable to the high development of the Department than was the fine quality of his own research and that of the graduate students he guided.

The services of Professor Bray transcended the Department of Chemistry and reached throughout the University. He served on numerous important faculty committees as chairman and as member. The same qualities which made his work as effective in chemistry made his service effective to the University. His colleagues respected him for his wisdom and loved him for his human qualities. As stated by one of his friends in the Department, “his character and University service, like his scientific achievements, have appeared the finer the more intimately they have come to be known.”