Why you should stay single: The scientific benefits of using a single photon

Like many other labs, Graham Fleming’s group is focusing on interdisciplinary techniques to make new discoveries and explore the mysteries of fundamental processes. Chemistry graduate student Kaydren Orcutt highlights how researchers can combine physics and biology, generating single photons in a bid to unentangle the mysteries of photosynthesis.

The scientists in Graham Fleming’s lab at UC Berkeley are used to asking – and answering – difficult questions, usually by creating new and complicated techniques. The newest technique being developed is that of Quantum Light Spectroscopy (QLS), wherein entangled photons are used to answer fundamental questions about how light is absorbed during photosynthesis. By developing a better understanding of how plants take “bites” of sunlight, researchers hope to make scientific progress in the food and energy sectors. Potential discoveries could lead to increased crop yields, or even the creation of artificial plants to help supply our planet’s energy needs.

Famously called “spooky action at a distance” by Albert Einstein, entanglement is the principle wherein more information can be obtained from a system than what is measured. For example, if you have one shoe of a pair and determine that you have the left shoe, then you know that the missing shoe is the right shoe, without having to look at that shoe. As a graduate student in the Fleming lab, I work with other researchers to create entangled photons – packets of light – using crystals which due to their inherent properties are able to split photons into daughter photons, which are entangled in energy, momentum, and polarization (orientation of the light).

Due to the rarity of the photon splitting events (think one-in-a-million or even one-in-a-billion), we are practically working with one photon pair at a time, rather than the full stream of light you would get with a laser. This low intensity works in our favor, as despite sun burns and scorching days, the sun is a very weak source of light, especially compared to the typical way of providing light in a lab – a laser. By limiting the number of pairs of photons, we are more accurately modeling the absorption of sunlight by plants and other photosynthetic systems.

Once we have obtained our photon pairs – which is no easy feat – we are able to use them to answer our difficult question: how does sunlight get absorbed by plants? While previous studies have been done on the processes that occur once the plant has the initial energy from the sun, we do not know how exactly light is being absorbed on a photon-by-photon basis. If we really want to know how photosynthesis works, in order to improve or replicate it, we have to know every process down to the smallest time and spatial scale—an understanding that scientists currently lack. Even the most basic steps are constantly being reexamined by researchers around the world as techniques are invented and improved.

We plan to use a heralded single photon with QLS to study how plants and bacteria take “bites” out of sunlight. Rather than sending both entangled photons into the sample, the first photon is used as a “herald” and is designed to let us know when the photon with information is coming to the “door” – i.e. our detector, so that we can sort the random light in our lab room from the light that actually interacted with our sample. This interaction is being reduced to a binary at each stage, as the photon sent to the sample will either be absorbed, or not, and then if the photon is absorbed, the sample might re-emit a photon as fluorescence. 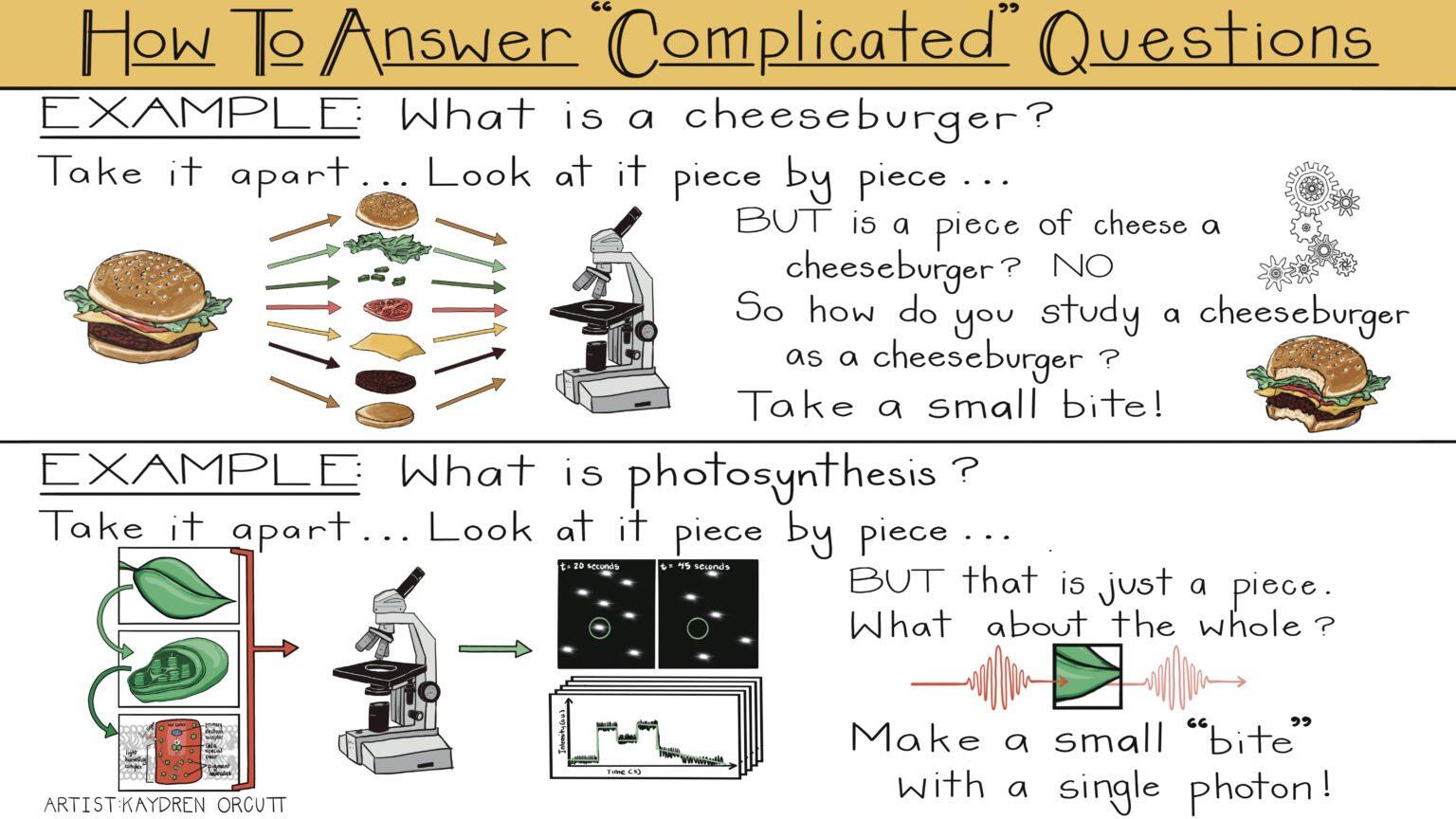 Quantum Light Spectroscopy is a very difficult technique in multiple ways. The process that makes the photons is complicated and very low in efficiency. The detection scheme requires a herald photon just to be able to distinguish the informative photons from the random photons in the room. Those difficulties do not even touch on the “normal” problems associated with studying photosynthetic complexes, such as their environments and interactions with near components.

So, why use a single photon set-up? Perhaps one of the most common questions received when speaking on this project, is why not use a normal light source instead of entangled photons, and instead use single molecule studies? Single molecule studies would also break down the system into small time and spatial scales, and while single molecule techniques are not easy, they are currently more established than using entangled photons. However, single molecule studies are further removed from the actual system. What if interactions between the molecules are necessary to get an accurate understanding of how the system works, as if these molecules are cogs in a machine? Rather than looking at the system component-by-component, in that case, all components must be together, and instead the way of probing the system is where the time and length scale control must occur.