When scientists fight to save the climate 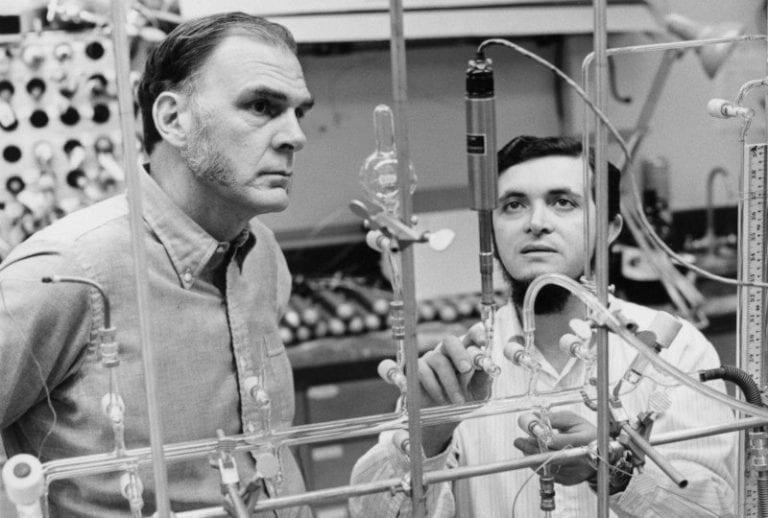 Research by F. Sherwood Rowland and alum Mario Molina is at the heart of a recent positive U.N. report. (Photo courtesy of UC Irvine.)

A new article out from the UCI School of Physical Sciences states that on January 9, a United Nations-backed panel of experts announced that Earth’s protective ozone layer is on track to recover within four decades, closing an ozone hole over the Antarctic that was first noticed in the 1980s.

But it was research conducted at the University of California, Irvine in the 1970s that made this possible.

Back then, chemistry professor F. Sherwood “Sherry” Rowland and postdoctoral student Mario Molina (Ph.D. '72, Chem) made a shocking discovery: A single chlorine atom byproduct from aerosol hairsprays, deodorants and other popular consumer products could chew up 100,000 ozone atoms in the stratosphere. The stratospheric ozone layer, 12 to 30 miles above Earth, protects life on the planet from harsh solar radiation.

“Mario and I realized this was not just a scientific question, but a potentially grave environmental problem involving substantial depletion of the stratospheric ozone layer,” Rowland said later. “Entire biological systems, including humans, would be at danger from ultraviolet rays.”

He and Molina published their findings in the peer-review journal Nature in 1974, and their lives – and the world – would never be the same. Along with Paul Crutzen, they won the Nobel Prize in Chemistry in 1995 "for their work in atmospheric chemistry, particularly concerning the formation and decomposition of ozone."

They decided they had to advocate for a ban on consumer products using chlorofluorocarbons that were earning billions of dollars annually. Industry representatives fought back: At one point, Aerosol Age, a trade journal, speculated that Rowland was a member of the Soviet Union’s KGB, out to destroy capitalism. Even some fellow scientists grumbled that he was going overboard with a hypothesis.

Rowland calmly stayed the course, working to convince everyone from Margaret Thatcher to Al Gore to reporters from hundreds of news outlets of what was at stake. Scientists doing similar research stuck by him, and consumers stopped using the sprays. One who believed him from Day One was his wife, Joan. When he told her the results of his and Molina’s calculations in 1974, she searched the house and threw out every spray can.

A big step toward ‘green’ ammonia and a ‘greener’ fertilizer
END_OF_DOCUMENT_TOKEN_TO_BE_REPLACED