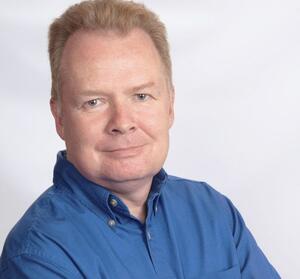 The 900 MHz NMR was installed in 2006 and QB3-Berkeley’s 900 MHz NMR facility was born. The NMR facility is one of 11 QB3-Berkeley core research facilities within QB3-Berkeley, among the 32 core research facilities on the UC Berkeley campus. NMR, or nuclear magnetic resonance spectroscopy, is a common analytical technique used to gain structural information about molecules of interest. While NMR is a technique historically used by chemists, its use in biological sciences has been steadily growing over the last few decades.

Jeff Pelton, PhD, has been the NMR facility manager since its founding. After earning his doctorate in biophysical chemistry from UC Berkeley in 1990, Pelton completed his postdoctoral training at the National Institutes of Health, furthering his expertise in NMR spectroscopy. Pelton returned to UC Berkeley in 1993 as a scientist at Lawrence Berkeley National Laboratory, managing the NMR facility there until moving onto the QB3-Berkeley facility.

NMR, which uses the same technology as the more familiar clinical MRI, probes the identity and connectivity of different atoms within a molecule to determine its molecular structure. In NMR, a very strong magnetic field is applied to a sample, which aligns the nuclei of the atoms within a molecule. Radio waves of different frequencies are shot into the sample. When a nucleus of an atom is hit by a radio wave of its resonant frequency, it causes this nucleus to flip back and forth between its ground state where it is aligned with the magnetic field and an excited state where it goes against the magnetic field. This constant oscillation between the ground and excited states is called resonance, which can be measured by an electronic detector. Different atoms have different resonant frequencies that are dependent on their chemical environment within a molecule. By measuring the different resonant frequencies of the atomic nuclei of a molecule, the structure of the molecule can be determined. 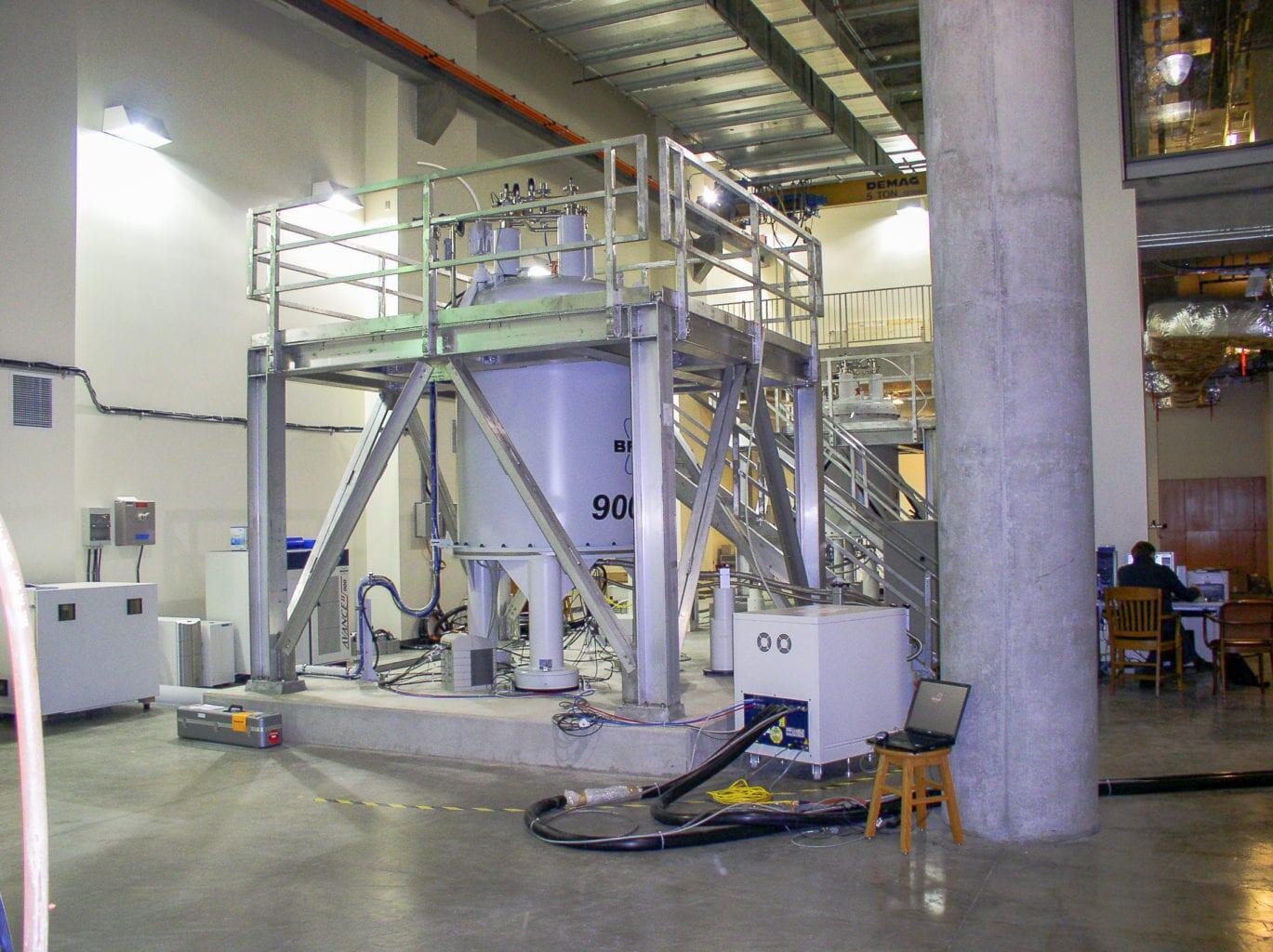 The QB3-Berkeley 900-MHz NMR spectrometer is the most powerful NMR on the Berkeley campus. 900 MHz refers to the resonant frequency of hydrogen nuclei when exposed to the 21.1 Tesla magnetic field of the instrument. For reference, the magnetic field of the Earth is around 50 μT, or about 400,000 times weaker. Using such a strong magnetic field in the 900 MHz spectrometer — as opposed to a common 500-MHz spectrometer for example — increases the separation of signals by a factor of 9/5. This increase in signal separation makes structure elucidation of more complex molecules much more feasible than with lower field instruments. Moreover, the 900-MHz spectrometer is equipped with a cryoprobe — the electronic detector around the sample is cooled using cryogenic helium gas to a temperature of 20 K, or about -424 °F. Keeping the detector at such low temperatures drastically increases the sensitivity of the spectrometer. Additionally, liquid helium is used to cool the coils of the superconducting magnet. As helium is an expensive, non-renewable resource, the instrument is equipped with a helium recycler. As the cryogenic helium evaporates from the instrument it is captured and collected in a 1000-cubic-foot bag. From there the helium gas is piped under the street from Stanley Hall to Latimer Hall where it is condensed into a liquid and used again. Pelton estimates that this system recovers 85% of the helium used in the spectrometer each year.

“The future of this facility is in proteins and chemical biology,” Pelton said. Indeed, the spectrometer has been used for some impressive biological studies.

A report from Professor Michelle C. Chang’s lab in the College of Chemistry showcases the utility of the 900-MHz spectrometer in chemical biology. A biosynthetic pathway was identified in the bacterium Streptomyces cattleya that produced a molecule with a carbon-carbon triple bond, something not frequently observed in biological molecules. However, they had trouble pinpointing one of the intermediate molecules in the pathway. This is where the 900-MHz spectrometer comes in. Normally samples for NMR need to be very pure to get a good signal, and this can be a problem when trying to isolate biological molecules from a vast mixture. To address this, they started the biosynthetic pathway with a precursor molecule comprised of special isotopes of carbon and nitrogen that make the molecule much more sensitive to NMR. This drastically decreased the noise in the signal, allowing them to determine the exact structure of the intermediate molecule in the pathway. 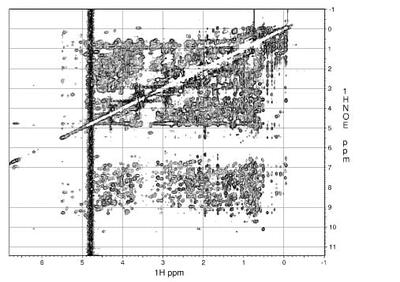 In addition to small-molecule structure elucidation, the 900-MHz spectrometer can be used to study protein structure and dynamics. A few years ago, a researcher approached Pelton with a small protein for which they were trying to determine its structure. Protein structure elucidation frequently relies on having crystals of the protein. However, sometimes proteins cannot be crystallized. With Pelton’s help, the researcher was able to obtain the structure of their protein using the 900-MHz spectrometer. Not only did the NMR experiment provide structural information, but it also revealed why they couldn’t crystallize their protein: a large region of the protein was found to be in a disordered, flexible state.

“Most of my time is spent interacting with graduate students, helping them understand how NMR can be used to solve their scientific problems,” Pelton said. If a student is interested in a quick experiment, Pelton can design it for them. When a student is interested in doing longer or more complex experiments, he is happy to teach them how to design the experiments themselves. The facility is available for use by all researchers on campus as well as outside researchers. Visit the 900 MHz NMR Facility’s website for more information.