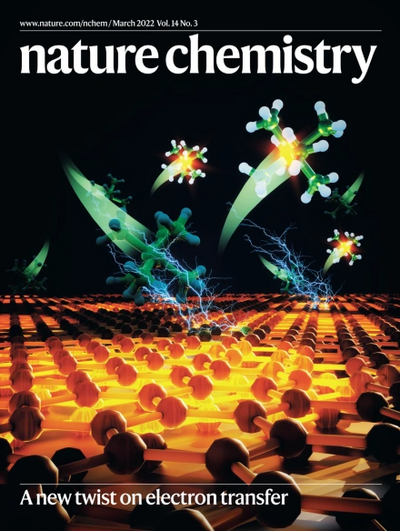 The transformation of energy from one form to another lies at the heart of all processes that keep the world buzzing. In electrochemical reactions, electrical energy flowing between an electrode and an electrolyte is converted into chemical energy stored in bonds. Scientists have spent centuries designing and refining pathways for these reactions, making them faster and more efficient to meet continually increasing global energy demands. Now, researchers have shown that looking to the thinnest possible limit of a crystalline material — single atomic layers — can provide entirely new ways to control electrochemical reactions at a solid–liquid interface.

In a study recently published in Nature Chemistry, a team led by Kwabena Bediako, Assistant Professor of Chemistry at UC Berkeley, in collaboration with Carnegie Mellon University professor and theorist Venkat Viswanathan, has demonstrated that stacking two single layers of graphene with a slight rotation – a so-called twist – between the lattices can modulate the rate of an electrochemical reaction on the graphene surface. Intriguingly, near a specific “magic” interlayer twist angle, the reaction rate is dramatically enhanced. Understanding the mechanism behind this magical chemical reactivity will pave the way for manipulating electrochemical behavior at a wide variety of twisted two-dimensional (2D) interfaces.

The idea of twisting stacked lattices to affect material properties has been theorized for about a decade but gained rapid popularity in 2018 when it was discovered that twisted bilayer graphene can behave as a superconductor at a magic twist angle of ~1.1°. The superconducting phase results from energy levels in the electronic structure of the magic angle system that cause the electrons to become localized, or in a sense, slow down and interact strongly with one another. Thinking about simple models of electrochemical reactions, the rate of electron transfer between a solid electrode and a liquid electrolyte heavily depends on the number of electrons in the electrode that have an appropriate energy to participate in a chemical reaction in the electrolyte. This led Bediako and postdoctoral researcher Dr. Yun Yu, lead author on the study, to postulate that the unique electronic properties in the twisted bilayer graphene system could be applied to electrochemistry as well.

Prof. Bediako states, “We knew from the work of physicists that the electronic structure of bilayer graphene is very sensitive to the twist angle between the layers. At a so-called “magic angle”, there is a massive increase in the density of electronic states within a narrow energy range, which tells us that there are many electrons packed into that range of energy. We wondered whether interfacial chemistry could be affected by this significant change in the physics of the material.”

Dr. Yu and Kaidi Zhang, a graduate student in the Bediako lab, tested this hypothesis by measuring the rate of reduction of hexaammineruthenium(III) (Ru(NH3)63+) on bilayer graphene surfaces with different interlayer twist angles. As expected, there was a significant increase in the reaction rate in samples with an interlayer twist near the magic angle due to the high density of electrons in the graphene layers that align with the redox potential of Ru(NH3)63+/2+.

Meanwhile, samples with other twist angles, which have different electronic band structures, exhibited a much slower reaction rate. Surprisingly, the reaction rate in the magic angle system was about five times faster than the team had predicted using traditional electrochemical models, which is still a bit of a mystery.

Dr Yu commented, “This fascinating, anomalous behavior tells us that there are some other effects that remain unclear. For example, we think the unique electronic structure of “magic angle” twisted bilayer graphene could modify how strongly molecules interact with the electrode, a key parameter that determines the speed of the interfacial reaction. We hope that others in the scientific community, particularly theorists, will be inspired to investigate this system and help to uncover answers to these elusive questions.”

Prof. Bediako adds, “Historically, surface scientists and electrochemists have known that it is possible to increase the chemical reactivity and performance of materials by introducing defects, like missing atoms or steps and edges. These kinds of conventional defects can be extremely difficult to control at the atomic scale. What our team has shown in this work is that it is possible to use the finely tunable interlayer twist between atomically thin layers to control this chemistry. We are excited to explore the possibilities of using this ‘twistronic chemistry’ to catalytic reactions that are of key importance to energy conversion devices.”

Other co-authors on the paper include Holden Parks and Mohammad Babar at Carnegie Mellon University, Stephen Carr at Brown University, and Isaac Craig, Madeline Van Winkle, and Artur Lyssenko at UC Berkeley.