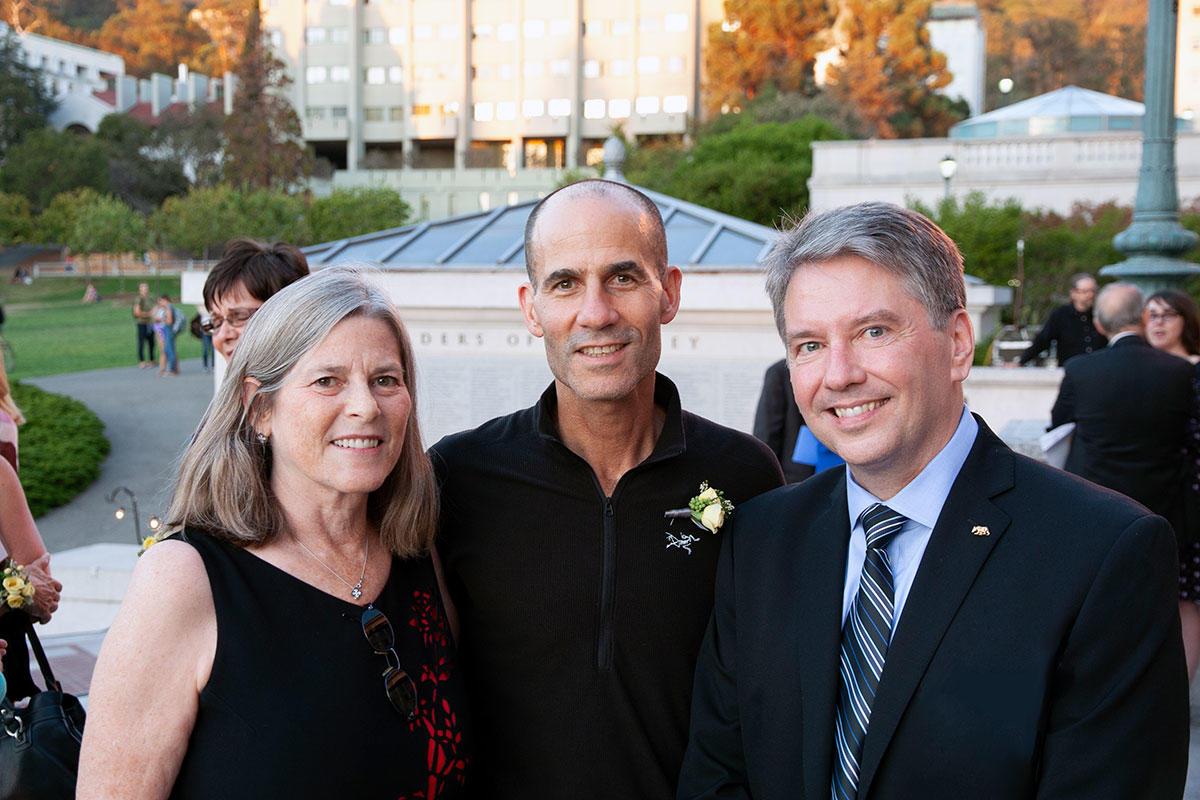 Berkeley — University of California, Berkeley, alumnus Terry Rosen, the CEO of Arcus Biosciences, and his wife, Tori, have donated $25 million to the College of Chemistry for a building to be named in honor of Terry Rosen’s beloved mentor and former chemistry dean, Clayton Heathcock.

Rosen, who obtained his Ph.D. in 1985 while working in Heathcock’s lab, has fond memories of the four years he spent at UC Berkeley and decided that naming a building after Heathcock was a great way to say, ‘Thank you.’

“Berkeley’s curriculum is very research-focused, and it became obvious to me, when I arrived as a graduate student, that not only were the research and specific project that Clayton proposed to me very exciting, but Clayton’s way of interacting with his students, and his total passion for the science and engagement, were awesome,” said Rosen, who has had a long career in drug discovery and development, including the founding of two startups that focused on small-molecule drugs. “It was a very special time for me, and I think a very important time for the Heathcock group, as well.”

The new building, to be named Heathcock Hall pending Regental approval, will be located in the college’s complex and primarily house state-of-the-art research labs, with some classroom space and undergraduate labs. It will also include collaborative spaces to encourage faculty and student entrepreneurs to commercialize their innovations.

At the eastern entrance to campus, across from the Hearst Greek Theatre, Heathcock Hall will “provide a striking gateway into the college,” said College of Chemistry Dean Douglas Clark, the Gilbert Newton Lewis Professor in the Department of Chemical and Biomolecular Engineering. “We don't really have that entryway to the college complex, so the new building will be a functional upgrade, as well as an enhancement in the overall appearance of the college.”

“Terry and Tori have been generous donors and great supporters of the College of Chemistry, and this is such an incredible opportunity for us,” he said. “Our departments rank among the best in the world, but if you look at our peers across the country, they all have relatively new facilities. We are lagging behind, in that regard, so new space is essential to attract new hires and retain our top faculty.”

The new building, scheduled for groundbreaking in 2021 and to open in 2023, will have more space than adjoining Lewis Hall, allowing for some expansion of research in the college. The extra space will also accommodate disruptions caused by the eventual demolition of Lewis, a 71-year-old building not well-suited for modern research. The new building, its name and the future demolition of Lewis are subject to approval by the UC Regents.

"Basic research provides the necessary foundation for expanding knowledge and developing scientific skills, … it’s akin to learning to walk before you can run,” Tori Rosen said. “I believe providing a top-tier environment for students and faculty is key to the success of training future scientists to be the ‘best-in-class,’ paving the way for exciting and innovative achievement, both individually and collectively."

Heathcock (pronounced HETH’ cock), now 83, said he was both honored and humbled by the gift.

“I was blown away and quite conflicted about the whole idea of naming a building in my honor. I did nothing to deserve that,” said Heathcock, who retired in 2004 and is a professor emeritus of chemistry. “But we have all had teachers who changed the direction of our lives. I am grateful to Terry, who was a real standout in my lab in the 1980s.”

Longtime benefactors of the college, the Rosens gave $1 million several years ago to help jump-start the building project, supported a named lectureship in Heathcock’s honor and have given generously to the college’s annual fund throughout the years. Terry Rosen currently holds the title of special adviser to the dean and is also a trustee of the UC Berkeley Foundation.

“He has provided a lot of time, wisdom and advice to the college and the university,” Clark said.

Heathcock said that, in the 1980s, Rosen “was just a delightful kid to have in the lab,” though that “kid” devised a “very creative organic synthesis” that would aid in the chemical synthesis of the class of cholesterol-lowering statin drugs that includes Lipitor. At that time, the lab was at its peak of productivity, focused on finding how to make complex chemicals that no one had been able to synthesize before. Many of these were natural products Heathcock tried to mimic in the lab in Latimer Hall.

“The (lab) group culture was amazing. There was a great work ethic, everybody lived in Latimer, the group was very cohesive, and everybody was committed to their research,” Rosen said.

Like many of Heathcock’s students, Rosen went into industry after graduation, working initially for Abbott Laboratories and then for Pfizer before returning to California to join the Bay Area startup Tularik Inc. as a medicinal chemist and eventually leading all of the company’s research. That company, cofounded by UC Berkeley professor Robert Tjian, was later acquired by Amgen, and Rosen worked his way up to become the biotechnology company’s head of Therapeutic Discovery.

His entrepreneurial spirit led him to leave Amgen and co-found Flexus Biosciences, which was acquired by Bristol-Myers Squibb in 2015, and Arcus Biosciences, which went public in March 2018. Both companies focused on a field called immune-oncology and creating small-molecule drugs to treat cancer.

Heathcock, a native of Texas, joined the UC Berkeley faculty in 1964 after obtaining his Ph.D. at the University of Colorado at Boulder in 1963. He served as chair of UC Berkeley’s Department of Chemistry from 1986 to 1989 and dean of the college from 1999 to 2005. He returned for six months in 2008 as interim dean and has remained connected to the department throughout his retirement.

Heathcock authored 285 papers during his research career and was honored by election to the National Academy of Sciences. He is a fellow of the American Chemical Society and American Academy of Arts and Sciences and has received the Centenary Prize from the Royal Society of Chemistry and the H. C. Brown Award and Paul Gassman Award for Distinguished Service from the American Chemical Society.

He remains active, consulting for law firms on pharmaceutical patents and raising and breeding Rhodesian ridgebacks at his home in Martinez.