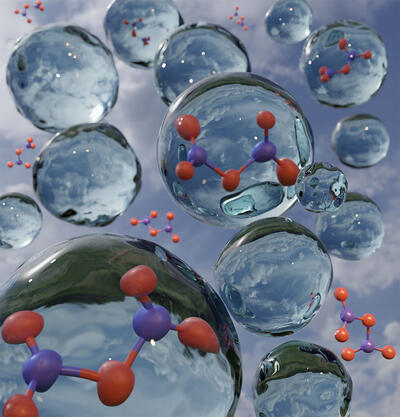 A new study with implications for atmospheric chemistry has answered some long-enduring questions about the chemical reactivity of an air pollutant molecule with aerosol, revealing the vital role played by the interface between water and gas. The results carry impacts for environmental and climate science, as well as human health.

Researchers from the University of California conducted the research, which provides a quantitative picture of the reactive uptake of dinitrogen pentoxide (N2O5) to aqueous aerosol. Their findings have been published in Nature Communications.

According to the researchers, Andreas Goetz and colleagues Vinícius Cruzeiro (UC San Diego) and David Limmer and Mirza Galib (UC Berkeley), the study demonstrates that, contrary to conventional wisdom and prevailing assumptions by atmospheric chemists, reactivity in the interfacial region – the area of contact between the liquid and gas – turns out to be crucial in that most of the N2O5 hydrolysis happens within 2 nanometers of the water/vapor interface. Additionally, the researchers determined the thermodynamic and kinetic parameters of the physical uptake and hydrolysis, which can be applied to improve existing climate models.

“Previous uptake models have invoked approximations that neglect the role of the interface between water and the gas phase, leading to results that did not match experimental observations,” said Goetz, assistant research scientist and computational chemistry group leader at the San Diego Supercomputer Center (SDSC) at UC San Diego. “We determined the thermodynamic and kinetic parameters for all processes from the moment that N2O5 molecules collide with and adsorb to the surface of an aerosol particle, diffuse on the surface, re-evaporate, solvate into the particle and eventually react at the surface and in the bulk liquid. The simulation framework presented in this work lays the foundation to investigate similar processes in more complex solutions and for molecules other than N2O5.”

David Limmer, Assistant Professor of Chemistry at UC Berkeley's College of Chemistry noted, "This observation is one example of a growing body of evidence suggesting that reactivity at liquid-vapor interfaces is pervasive. We are really just at the earliest stages of understanding how chemistry in these unique environments occurs theoretically."

Cruzeiro, first author of the study who worked with Goetz as a postdoctoral fellow, explained that computer models have evolved like special effects in movies. “In the early days of cinema special effects used to be crude and not very realistic, but nowadays are practically indistinguishable from reality. Similarly, our computer model of N2O5 and water includes all physical interactions without any crude simplifications, hence our simulations are quantitatively accurate in contrast to earlier studies,” said Cruzeiro. “Using these models, we performed numerical experiments in which we let N2O5 collide with a water/vapor interface mimicking the process that happens in nature with water droplets in the atmosphere. This allows us to observe what happens when N2O5 collides with aerosol droplets with a high degree of confidence, just as if we were watching a realistic movie of nature at a molecular level.”

The research team used molecular dynamics simulations with accurate data-driven, many-body potentials (mathematical functions that describe the potential energy of a system in terms of its molecular and atomic constituents) in combination with enhanced sampling techniques to determine the thermodynamics and kinetics of N2O5 interacting with water. The computational framework for these potentials, including the successful MB-pol water model – an advanced many-body model for water, has been established by UC San Diego Professor Francesco Paesani’s research group. Using data from these simulations, the researchers parameterized and solved a reaction-diffusion model to determine hydrolysis rates consistent with the experimental data. This work was able to go beyond other recent simulation results, published by Galib and Limmer in Science last year, which suggested the importance of interfacial chemistry.

The research was performed in the framework of the National Science Foundation’s (NSF) Center for Aerosol Impacts on Chemistry of the Environment (CAICE), which has its headquarters at the Scripps Institution of Oceanography and the Department of Chemistry and Biochemistry at UC San Diego. “A strong motivator for this work has been the importance of N2O5 for atmospheric chemistry, human health and the environment. For these reasons the fate of N2O5 in the atmosphere has also been an important research focus in the CAICE center,” said Limmer, assistant professor at UC Berkeley.

It is known that up to 50% of emitted nitrogen oxides (NOx) are removed by hydrolysis of N2O5 in the troposphere. NOx, by the way, has significant importance for human health and the environment – it is toxic with adverse effects on the immune system and respiratory function, it leads to acid rain, and it leads to ozone layer depletion. Notably, reactions of N2O5 with aerosol reduce the concentration of NOx pollutants in the atmosphere. Molecular simulations provide a quantitative picture of this process and demonstrate the importance of the water interface.

“The molecular dynamics simulations are computationally very expensive and need to run for a sufficiently long time to obtain converged results. We were in the lucky position to have ample computational time on SDSC Expanse and Texas Advanced Computing Center (TACC) Stampede via an XSEDE (Extreme Science and Engineering Discovery Environment) research allocation, as well as the aerosol compute cluster that I operate for CAICE research at SDSC,” said Goetz.

According to Goetz, it was particularly intriguing how complex the chemistry of such a seemingly simple small molecule like N2O5 can be, to the point that it has eluded full understanding for many decades. “In previous work we developed a computational model for N2O5 and its interactions with water based on highly accurate quantum mechanical reference calculations,” he said. “The time was thus right for this project. We had all ingredients and tools in place including computer power to address remaining questions on the uptake of N2O5.”

This research was performed collaboratively by Goetz’ and Limmer’s research groups, including postdoctoral fellow Galib and Cruzeiro, who performed most of the simulations. The research team also benefited from discussions with Paesani and University of Wisconsin-Madison professors Timothy Bertram and Gilbert Nathanson, who are part of CAICE, as well as the wider CAICE research community.

N2O5 at the Water/Air Interface

N2O5 collides with the water surface and performs a dance with the water molecules while being adsorbed at the water/air interface before being fully solvated in the bulk liquid. Visualization of 70 picoseconds of one of many simulation trajectories. Atom color coding: oxygen red, nitrogen blue, hydrogen white. Movie credit: Andreas Goetz, SDSC