Kristin Stangl, administrator for chemistry professor Jeffrey Long’s Large Carbon Capture Group, is the latest recipient of the Chemistry Achievement Prize (CAP). The prize is awarded quarterly to a College of Chemistry staff member for outstanding work, collaborative efforts and exemplary service to the college.

In her previous job Stangl supported Professor John Prausnitz, who nominated her for the prize because of her focus on service. In his nomination, Prausnitz said, “the quality of Kristin’s service exceeds anything I have previously experienced.” The CAP Committee took special notice of his opinion since Prausnitz joined the faculty in 1955, 60 years ago.

Prausnitz also said, “Kristin is remarkably knowledgeable about departmental, college and university administrative matters. Whenever there is a problem — and problems arise at least once a day — Kristin knows what to do, what form needs to be filled out and who needs to be called.”

Stangl says “It was a joy to work with Professor Prausnitz, who has a wealth of historical knowledge about the College.”

Outside of the work environment, Stangl enjoys developing both her creative and scientific sides with her young children. She is learning about jewelry making with her artistic daughter and growing crystals with her scientific son. 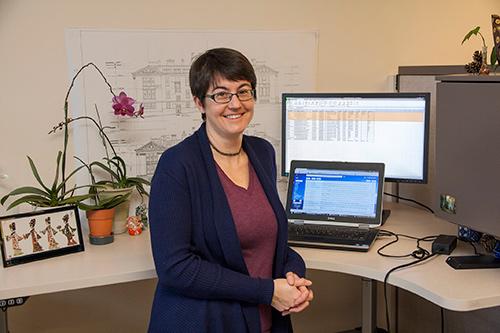