Solar beats nuclear at many potential settlement sites on Mars

The high efficiency, light weight and flexibility of the latest solar cell technology means photovoltaics could provide all the power needed for an extended mission to Mars, or even a permanent settlement there, according to a new analysis by scientists at the University of California, Berkeley.

Most scientists and engineers who’ve thought about the logistics of living on the surface of the Red Planet have assumed that nuclear power is the best alternative, in large part because of its reliability and 24/7 operation. In the past decade, miniaturized Kilopower nuclear fission reactors have advanced to the point where NASA considers them to be a safe, efficient and plentiful source of energy and key to future robotic and human exploration.

Solar power, on the other hand, must be stored for use at night, which on Mars lasts about the same length of time as on Earth. And on Mars, solar panels’ power production can be reduced by the omnipresent red dust that covers everything. NASA’s nearly 15-year-old Opportunity rover, powered by solar panels, stopped working after a massive dust storm on Mars in 2019.

The new study, published this week in the journal Frontiers in Astronomy and Space Sciences, uses a systems approach to actually compare these two technologies head-to-head for a six-person extended mission to Mars involving a 480-day stay on the planet’s surface before returning to Earth. That is the most likely scenario for a mission that reduces the transit time between the two planets and extends time on the surface beyond a 30-day window. 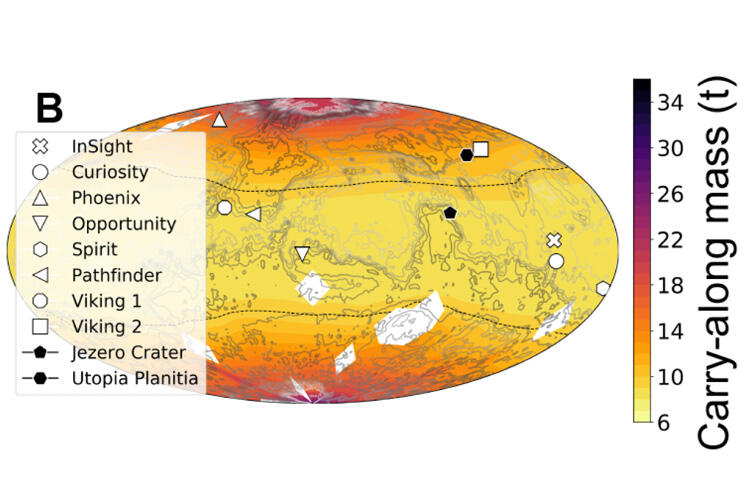 Astronauts traveling to Mars will need to minimize the weight of the power system they take with them from Earth. Photovoltaics would be the best choice if their planned settlement site is in the yellow area on this flattened map of Mars. Also shown are the sites of previous missions that have landed on Mars, including Jezero Crater (upper right), which NASA’s rover Perseverance is now exploring. (Image credit: Anthony Abel and Aaron Berliner, UC Berkeley)

Their analysis found that for settlement sites over nearly half the Martian surface, solar is comparable or better than nuclear, if you take into account the weight of the solar panels and their efficiency — as long as some daytime energy is used to produce hydrogen gas for use in fuel cells to power the colony at night or during sandstorms.

“Photovoltaic energy generation coupled to certain energy storage configurations in molecular hydrogen outperforms nuclear fusion reactors over 50% of the planet’s surface, mainly within those regions around the equatorial band, which is in fairly sharp contrast to what has been proposed over and over again in the literature, which is that it will be nuclear power,” said UC Berkeley bioengineering doctoral student Aaron Berliner, one of two first authors of the paper.

The study gives a new perspective on Mars colonization and provides a road map for deciding which other technologies to deploy when planning manned missions to other planets or moons.

“This paper takes a global view of what power technologies are available and how we might deploy them, what are the best-use cases for them and where do they come up short,” said co-first author Anthony Abel, a graduate student in the Department of Chemical and Biomolecular Engineering. “If humanity collectively decides that we want to go to Mars, this kind of systems-level approach is necessary to accomplish it safely and minimize cost in a way that’s ethical. We want to have a clear-eyed comparison between options, whether we’re deciding which technologies to use, which locations to go to on Mars, how to go and whom to bring.”

In the past, NASA’s estimates of the power needs of astronauts on Mars have generally focused on short stays, which don’t require power-hungry processes for growing food, manufacturing construction materials or producing chemicals. But as NASA and leaders of companies now building rockets that could go to Mars — including Elon Musk, CEO of SpaceX, and Jeff Bezos, founder of Blue Origin — talk up the idea of long-term, off-planet settlements, larger and more reliable sources of power need to be considered. 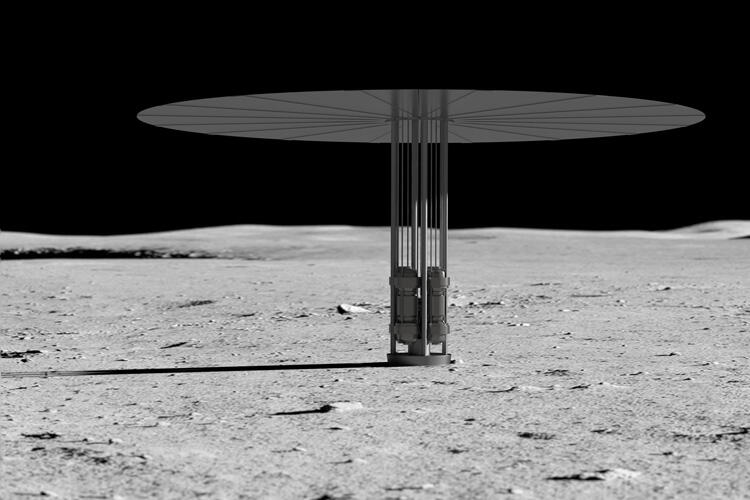 Illustration of a conceptual fission surface Kilopower system on the moon. (Image courtesy of NASA)

The complication is that all of these materials must be carried from Earth to Mars at a cost of hundreds of thousands of dollars per pound, making low weight essential.

One key need is power for biomanufacturing facilities that use genetically engineered microbes to produce food, rocket fuel, plastic materials and chemicals, including drugs. Abel, Berliner and their co-authors are members of the Center for the Utilization of Biological Engineering in Space (CUBES), a multi-university effort to tweak microbes using the gene-insertion techniques of synthetic biology to supply necessary supplies for a colony.

The two researchers discovered, however, that without knowing how much power will be available for an extended mission, it was impossible to assess the practicality of many biomanufacturing processes. So, they set out to create a computerized model of various power supply scenarios and likely power demands, such as habitat maintenance — which includes temperature and pressure control — fertilizer production for agriculture, methane production for rocket propellant to return to Earth, and bioplastics production for manufacturing spare parts.

Pitted against a Kilopower nuclear system were photovoltaics with three power storage options: batteries and two different techniques for producing hydrogen gas from solar energy — by electrolysis and directly by photoelectrochemical cells. In the latter cases, the hydrogen is pressurized and stored for later use in a fuel cell to produce power when the solar panels are not.

Only photovoltaic power with electrolysis — using electricity to split water into hydrogen and oxygen — was competitive with nuclear power: It proved more cost-effective per kilogram than nuclear over nearly half the planet’s surface.

The main criterion was weight. The researchers assumed that a rocket ferrying a crew to Mars could carry a payload of about 100 tons, exclusive of fuel, and calculated how much of that payload would need to be devoted to a power system for use on the planet’s surface. A journey to and from Mars would take about 420 days — 210 days each way. Surprisingly, they found that the weight of a power system would be less than 10% of the entire payload.

For a landing site near the equator, for example, they estimated that the weight of solar panels plus hydrogen storage would be about 8.3 tons, versus 9.5 tons for a Kilopower nuclear reactor system.

Their model also specifies how to tweak photovoltaic panels to maximize efficiency for the different conditions at sites on Mars. Latitude affects the intensity of sunlight, for example, while dust and ice in the atmosphere can scatter longer wavelengths of light.

Abel said that photovoltaics are now highly efficient at converting sunlight into electricity, though the best performers are still expensive. The most crucial new innovation, however, is a lightweight and flexible solar panel, which makes storage on the outbound rocket easier and the cost of transport less. 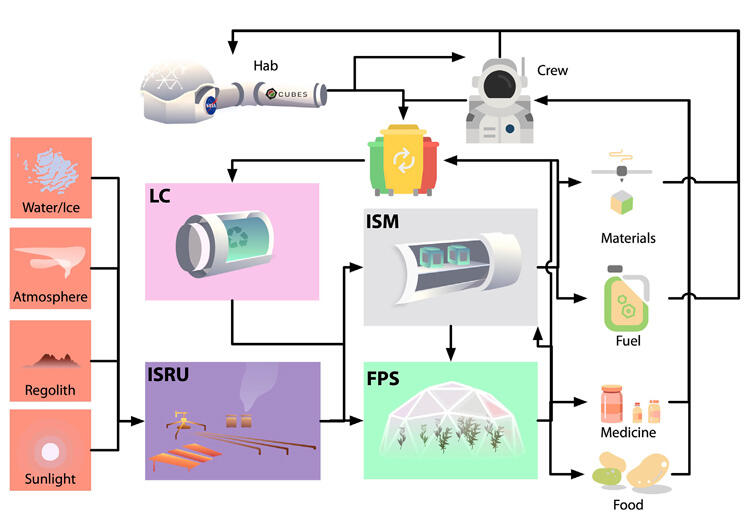 Humans on Mars would need to use the only raw materials available — water ice, atmospheric gases, the Martian soil and sunlight — to make everything they need for survival. Researchers like those in CUBES are working on ways to turn these raw materials into food, medicine, fuel and structural materials. This flow chart shows how in situ resource utilization (ISRU) turns the raw materials into a form that can be used to synthesize food and pharmaceuticals (FPS) and manufacture biopolymers (ISM) for use by the crew. Waste is collected and reused (loop closure, or LC) to maximize efficiency and reduce the cost of supply logistics from Earth. (Illustration credit: Aaron Berliner and Davian Ho, UC Berkeley)

“The silicon panels that you have on your roof, with steel construction, glass backing, et cetera, just won’t compete with the new and improved nuclear, but newer lightweight, flexible panels all of a sudden really, really change that conversation,” Abel said.

He noted, too, that lighter weight means more panels can be transported to Mars, providing backup for any panels that fail. While kilowatt nuclear power plants provide more power, fewer are needed, so if one goes down, the colony would lose a significant proportion of its power.

Berliner, who is also pursuing a degree in nuclear engineering, came into the project with a bias toward nuclear power, while Abel, whose undergraduate thesis was about new innovations in photovoltaics, was more in favor of solar power.

“I feel like this paper really stems from a healthy scientific and engineering disagreement on the merits of nuclear versus solar power, and that really the work is just us trying to figure out and settle a bet,” Berliner said. “which I think I lost, based on the configurations we chose in order to publish this. But it’s a happy loss, for sure.”

Other co-authors of the paper are Mia Mirkovic, a researcher at UC Berkeley at the Berkeley Sensor and Actuator Center; William Collins, UC Berkeley professor-in-residence of earth and planetary science and senior scientist at Lawrence Berkeley National Laboratory (Berkeley Lab); Adam Arkin, CUBES director and the Dean A. Richard Newton Memorial Professor in UC Berkeley’s Department of Bioengineering; and Douglas Clark, the Gilbert Newton Lewis Professor in the Department of Chemical and Biomolecular Engineering and dean of the College of Chemistry. Arkin and Clark are also senior faculty scientists at Berkeley Lab.

The work was funded by NASA (NNX17AJ31G) and graduate research fellowships from the National Science Foundation (DGE1752814).