Carbon dioxide (depicted in red and white at left) is the main greenhouse gas warming Earth and is emitted in large quantities in the flue gas from industrial and power plants. A new method for removing CO2 from these flue gases involves piping the emissions through a porous material based on the chemical melamine (center). DETA, a chemical bound inside the porous melamine, grabs CO2 and removes it from the gas, with nitrogen vented to the atmosphere. (Image courtesy of Haiyan Mao and Jeffrey Reimer, UC Berkeley)

Using an inexpensive polymer called melamine — the main component of Formica — chemists have created a cheap, easy and energy-efficient way to capture carbon dioxide from smokestacks, a key goal for the United States and other nations as they seek to reduce greenhouse gas emissions.

The process for synthesizing the melamine material, published this week in the journal Science Advances, could potentially be scaled down to capture emissions from vehicle exhaust or other movable sources of carbon dioxide. Carbon dioxide from fossil fuel burning makes up about 75% of all greenhouse gases produced in the U.S.

The new material is simple to make, requiring primarily off-the-shelf melamine powder — which today costs about $40 per ton — along with formaldehyde and cyanuric acid, a chemical that, among other uses, is added with chlorine to swimming pools.

“We wanted to think about a carbon capture material that was derived from sources that were really cheap and easy to get. And so, we decided to start with melamine,” said Jeffrey Reimer, Professor of the Graduate School in the Department of Chemical and Biomolecular Engineering at the University of California, Berkeley, and one of the corresponding authors of the paper.

The so-called melamine porous network captures carbon dioxide with an efficiency comparable to early results for another relatively recent material for carbon capture, metal organic frameworks, or MOFs. UC Berkeley chemists created the first such carbon-capture MOF in 2015, and subsequent versions have proved even more efficient at removing carbon dioxide from flue gases, such as those from a coal-fired power plant.

But Haiyan Mao, a UC Berkeley postdoctoral fellow who is first author of the paper, said that melamine-based materials use much cheaper ingredients, are easier to make and are more energy efficient than most MOFs. The low cost of porous melamine means that the material could be deployed widely.

“In this study, we focused on cheaper material design for capture and storage and elucidating the interaction mechanism between CO2 and the material,” Mao said. “This work creates a general industrialization method towards sustainable CO2 capture using porous networks. We hope we can design a future attachment for capturing car exhaust gas, or maybe an attachment to a building or even a coating on the surface of furniture.”

While eliminating fossil fuel burning is essential to halting climate change, a major interim strategy is to capture emissions of carbon dioxide — the main greenhouse gas — and store the gas underground or turn CO2 into usable products. The U.S. Department of Energy has already announced projects totaling $3.18 billion to boost advanced and commercially scalable technologies for carbon capture, utilization and sequestration (CCUS) to reach an ambitious flue gas CO2 capture efficiency target of 90%. The ultimate U.S. goal is net zero carbon emissions by 2050. 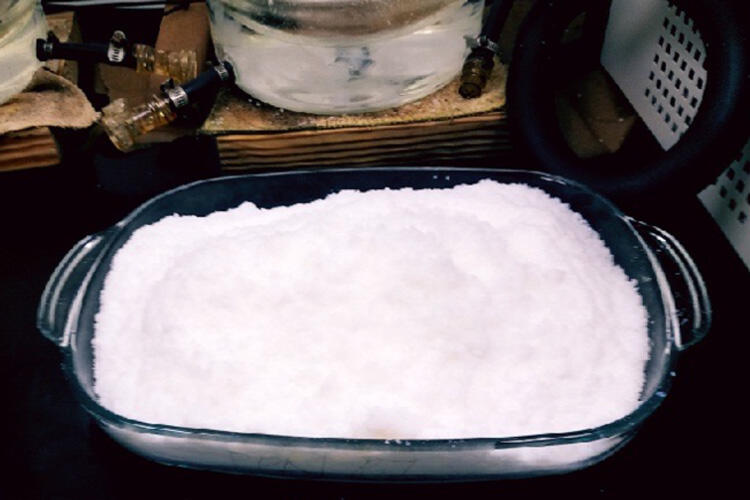 White melamine powder is cheap and easy to obtain. When treated with formaldehyde and cyanuric acid, it becomes very porous. Adding DETA allows the pores to adsorb carbon dioxide, which is easily released by heating so that the carbon can be stored or reused. (Photo by Jeffrey Reimer)

But carbon capture is far from commercially viable. The best technique today involves piping flue gases through liquid amines, which bind CO2. But this requires large amounts of energy to release the carbon dioxide once it’s bound to the amines, so that it can be concentrated and stored underground. The amine mixture must be heated to between 120 and 150 degrees Celsius (250-300 degrees Fahrenheit) to regenerate the CO2.

In contrast, the melamine porous network with DETA and cyanuric acid modification captures CO2 at about 40 degrees Celsius, slightly above room temperature, and releases it at 80 degrees Celsius, below the boiling point of water. The energy savings come from not having to heat the substance to high temperatures.

In its research, the Berkeley/Stanford/Texas team focused on the common polymer melamine, which is used not only in Formica but also inexpensive dinnerware and utensils, industrial coatings and other plastics. Treating melamine powder with formaldehyde — which the researchers did in kilogram quantities — creates nanoscale pores in the melamine that the researchers thought would absorb CO2. 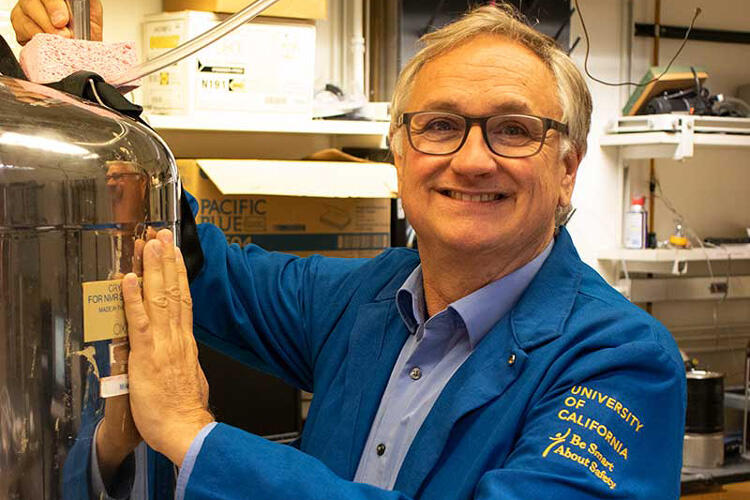 Jeffrey Reimer in his UC Berkeley laboratory. (Image courtesy of College of Chemistry)

Mao said that tests confirmed that formaldehyde-treated melamine adsorbed CO2 somewhat, but adsorption could be much improved by adding another amine-containing chemical, DETA (diethylenetriamine), to bind CO2. She and her colleagues subsequently found that adding cyanuric acid during the polymerization reaction increased the pore size dramatically and radically improved CO2 capture efficiency: Nearly all the carbon dioxide in a simulated flue gas mixture was absorbed within about 3 minutes.

The addition of cyanuric acid also allowed the material to be used over and over again.

A new family of porous networks

Mao and her colleagues conducted solid-state nuclear magnetic resonance (NMR) studies to understand how cyanuric acid and DETA interacted to make carbon capture so efficient. The studies showed that cyanuric acid forms strong hydrogen bonds with the melamine network that helps stabilize DETA, preventing it from leaching out of the melamine pores during repeated cycles of carbon capture and regeneration. 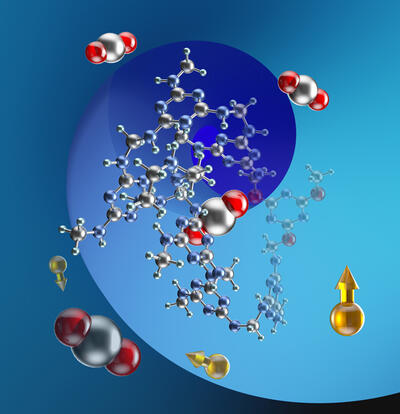 Image: UC Berkeley researchers have developed a brand-new family of sustainable, scalable, solid-state materials — polyamine-appended, cyanuric acid-stabilized, melamine nanoporous networks — that spontaneously adsorb CO2 for carbon capture and storage. In the graphic, carbon dioxide molecules (carbon in silver, oxygen in red) interact with amines in the material (nitrogen in blue, hydrogen in green), allowing the material to adsorb the gas from smokestack emissions. The yellow balls with arrows represent carbon-13 isotopes and their nuclear spins, which were employed in NMR studies of the material. (Image courtesy of Haiyan Mao and Jeffrey Reimer, UC Berkeley)

“What Haiyan and her colleagues were able to show with these elegant techniques is exactly how these groups intermingle, exactly how CO2 reacts with them, and that in the presence of this pore-opening cyanuric acid, she’s able to cycle CO2 on and off many times with capacity that’s really quite good,” Reimer said. “And the rate at which CO2 adsorbs is actually quite rapid, relative to some other materials. So, all the practical aspects at the laboratory scale of this material for CO2 capture have been met, and it’s just incredibly cheap and easy to make.”

“Utilizing solid-state nuclear magnetic resonance techniques, we systematically elucidated in unprecedented, atomic-level detail the mechanism of the reaction of the amorphous networks with CO2,” Mao said. “For the energy and environmental community, this work creates a high-performance, solid-state network family together with a thorough understanding of the mechanisms, but also encourages the evolution of porous materials research from trial-and-error methods to rational, step-by-step, atomic-level modulation.”

The Reimer and Cui groups are continuing to tweak the pore size and amine groups to improve the carbon capture efficiency of melamine porous networks, while maintaining the energy efficiency. This involves using a technique called dynamic combinatorial chemistry to vary the proportions of ingredients to achieve effective, scalable, recyclable and high-capacity CO2 capture. 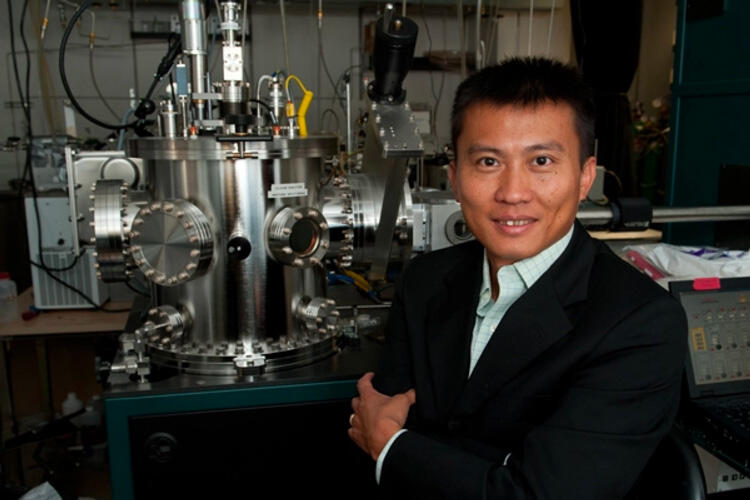 Yi Cui, director of the Precourt Institute for Energy at Stanford University.

Reimer and Mao have also closely collaborated with the Cui group at Stanford to synthesize other types of materials, including hierarchical nanoporous membranes — a class of nanocomposites combined with a carbon sphere and graphene oxide — and hierarchical nanoporous carbons made from pine wood, to adsorb carbon dioxide. Reimer developed solid-state NMR specifically to characterize the mechanism by which solid materials interact with carbon dioxide, in order to design better materials for carbon capture from the environment and energy storage. Cui developed a robust and sustainable solid-state platform and fabrication techniques for creating new materials to address climate change and energy storage.

Building a community of belonging
END_OF_DOCUMENT_TOKEN_TO_BE_REPLACED