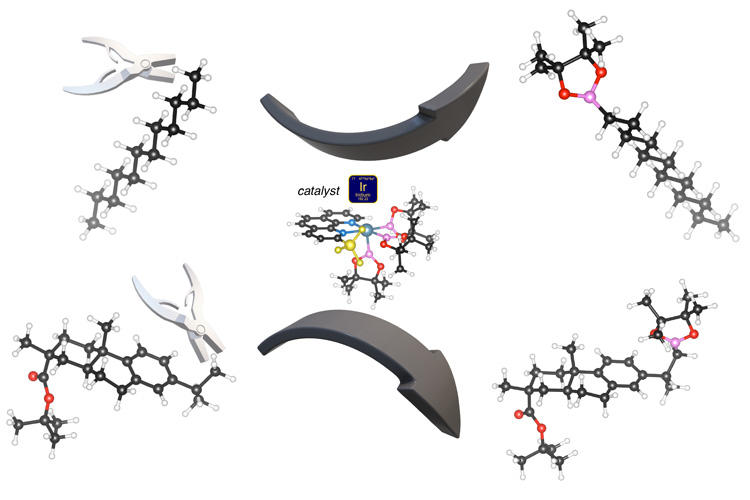 Illustration: A catalyst (center) based on iridium (blue ball) can snip a hydrogen atom (white balls) off a terminal methyl group (upper and lower left) to add a boron-oxygen compound (pink and red) that is easily swapped out for more complicated chemical groups. The reaction works on simple hydrocarbon chains (top reaction) or more complicated carbon compounds (bottom reaction). The exquisite selectivity of this catalytic reaction is due to the methyl group (yellow) that has been added to the iridium catalyst. The black balls are carbon atoms; red is oxygen; pink is boron. UC Berkeley image by John Hartwig.

The most common chemical bond in the living world — that between carbon and hydrogen — has long resisted attempts by chemists to crack it open, thwarting efforts to add new bells and whistles to old carbon-based molecules.

Now, after nearly 25 years of work by chemists at the University of California, Berkeley, those hydrocarbon bonds — two-thirds of all the chemical bonds in petroleum and plastics — have fully yielded, opening the door to the synthesis of a large range of novel organic molecules, including drugs based on natural compounds.

“Carbon-hydrogen bonds are usually part of the framework, the inert part of a molecule,” said John Hartwig, the Henry Rapoport Chair in Organic Chemistry at UC Berkeley. “It has been a challenge and a holy grail of synthesis to be able to do reactions at these positions because, until now, there has been no reagent or catalyst that will allow you to add anything at the strongest of these bonds.”

Hartwig and other researchers had previously shown how to add new chemical groups at C-H bonds that are easier to break, but they could only add them to the strongest positions of simple hydrocarbon chains.

In the May 15 issue of the journal Science, Hartwig and his UC Berkeley colleagues described how to use a newly designed catalyst to add functional chemical groups to the hardest of the carbon-hydrogen bonds to crack: the bonds, typically at the head or tail of a molecule, where a carbon has three attached hydrogen atoms, what’s called a methyl group (CH3).

“The primary C-H bonds, the ones on a methyl group at the end of a chain, are the least electron-rich and the strongest,” he said. “They tend to be the least reactive of the C-H bonds.”

UC Berkeley postdoctoral fellow Raphael Oeschger discovered a new version of a catalyst based on the metal iridium that opens up one of the three C-H bonds at a terminal methyl group and inserts a boron compound, which can be easily replaced with more complex chemical groups. The new catalyst was more than 50 times more efficient than previous catalysts and just as easy to work with.

The payoff could be huge. Each year, nearly a billion pounds of hydrocarbons are used by industry to make solvents, refrigerants, fire retardants and other chemicals and are the typical starting point for synthesizing drugs.

To prove the utility of the catalytic reaction, UC Berkeley postdoctoral fellow Bo Su and his coworkers in the lab used it to add a boron compound, or borane, to a terminal, or primary, carbon atom in 63 different molecular structures. The borane can then be swapped out for any number of chemical groups. The reaction specifically targets terminal C-H bonds, but works at other C-H bonds when a molecule doesn’t have a terminal C-H. 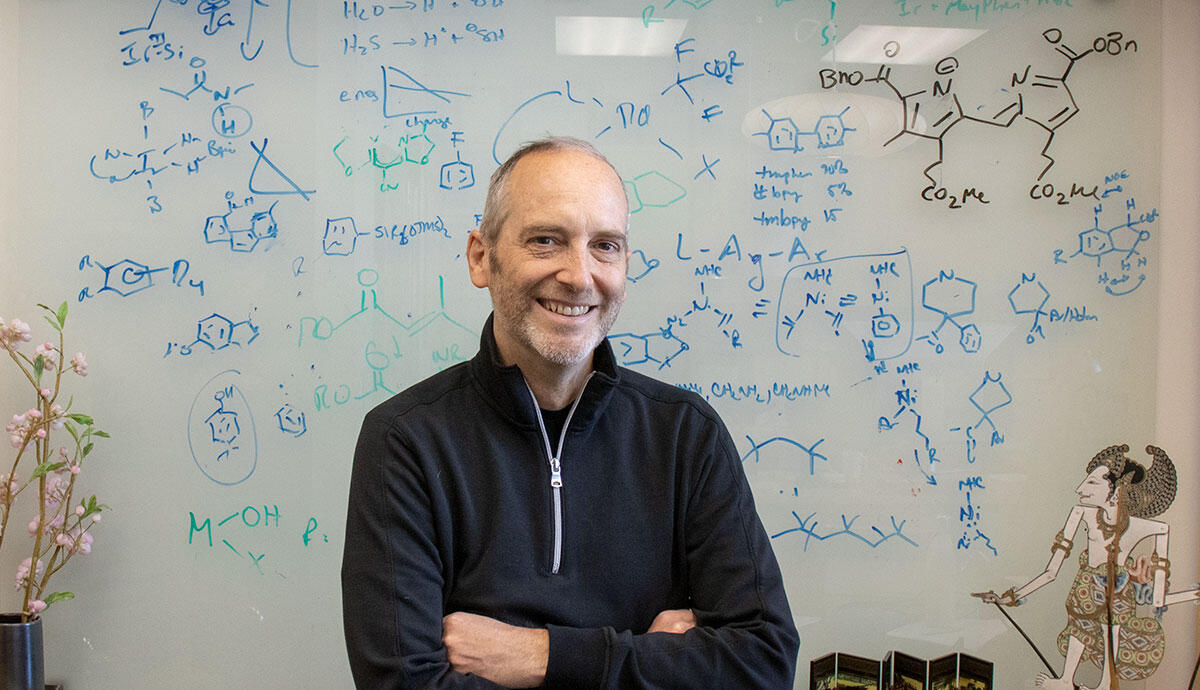 “We make a boron-carbon bond using boranes as reagents — they’re just a couple steps away from ant poison, boric acid — and that carbon-boron bond can be converted into many different things,” Hartwig said. “Classically, you can make a carbon-oxygen bond from that, but you can also make a carbon-nitrogen bond, a carbon-carbon bond, a carbon-fluorine bond or other carbon-halogen bonds. So, once you make that carbon-boron bond, there are many different compounds that can be made.”

Organic chemist Varinder Aggarwal from the University of Bristol referred to the catalytic reaction as “expert surgery” and characterized UC Berkeley’s new technique as “sophisticated and clever,” according to the magazine Chemical and Engineering News

One potential application, Hartwig said, is altering natural compounds — chemicals from plants or animals that have useful properties, such as antibiotic activity — to make them better. Many pharmaceutical companies today are focused on biologics — organic molecules, such as proteins, used as drugs — that could also be altered with this reaction to improve their effectiveness.

“In the normal course, you would have to go back and remake all those molecules from the start, but this reaction could allow you to just make them directly,” Hartwig said. “This is one type of chemistry that would allow you to take those complex structures that nature makes that have an inherent biological activity and enhance or alter that biological activity by making small changes to the structure.”

He said that chemists could also add new chemical groups to the ends of organic molecules to prep them for polymerization into long chains never before synthesized.

“It could enable you to take molecules that would be naturally abundant, biosourced molecules like fatty acids, and be able to derivatize them at the other end for polymer purposes,” he said.

Chemists have long tried to make targeted additions to carbon-hydrogen bonds, a reaction referred to as C-H activation. One still unachieved dream is to convert methane — an abundant, but often wasted, byproduct of oil extraction and a potent greenhouse gas — into an alcohol called methanol that can be used as a starting point in many chemical syntheses in industry. 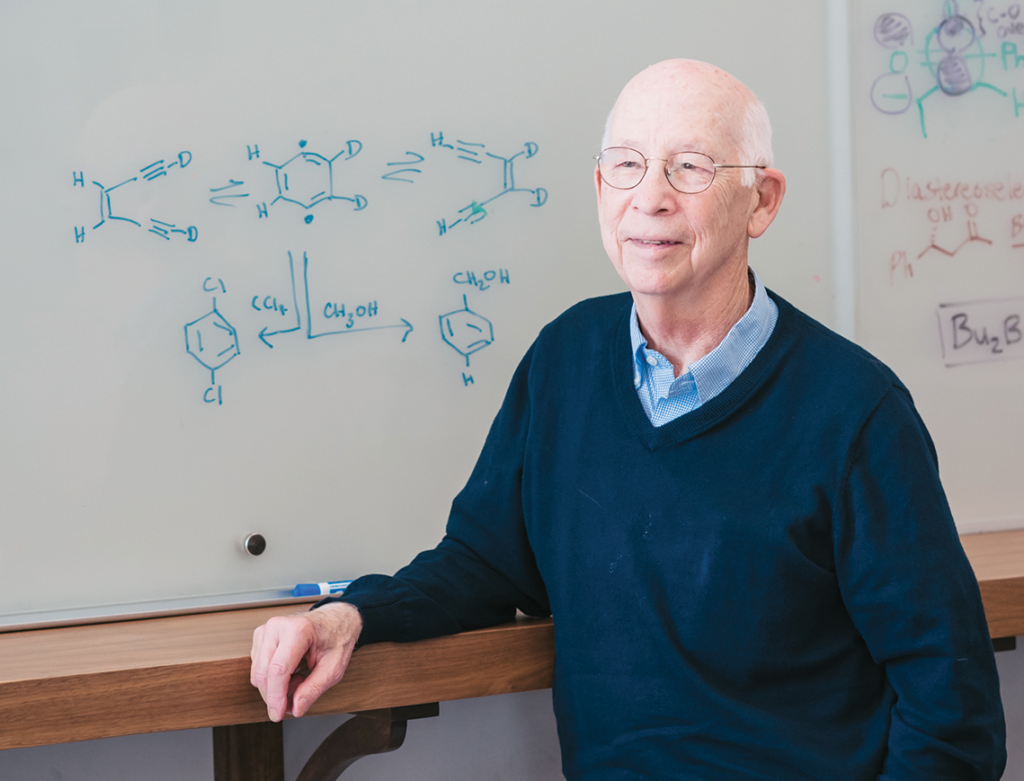 In 1982, Robert Bergman, now a UC Berkeley professor emeritus of chemistry, first showed that an iridium atom could break a C-H bond in an organic molecule and insert itself and an attached ligand between the carbon and hydrogen. While a major advance in organic and inorganic chemistry, the technique was impractical — it required one iridium atom per C-H bond. Ten years later, other researchers found a way to use iridium and other so-called transition metals, like tungsten, as a catalyst, where a single atom could break and functionalize millions of C-H bonds.

Hartwig, who was a graduate student with Bergman in the late 1980s, continued to bang on unreactive C-H bonds and in 2000 published a paper in Science describing how to use a rhodium-based catalyst to insert boron at terminal C-H bonds. Once the boron was inserted, chemists could easily swap it out for other compounds. With subsequent improvements to the reaction and changing the metal from rhodium to iridium, some manufacturers have used this catalytic reaction to synthesize drugs by modifying different types of C-H bonds. But the efficiency for reactions at methyl C-H bonds at the ends of carbon chains remained low, because the technique required that the reactive chemicals also be the solvent.

With the addition of the new catalytic reaction, chemists can now stick chemicals in nearly any type of carbon-hydrogen bond. In the reaction, iridium snips off a terminal hydrogen atom, and the boron replaces it; another boron compound floats away with the released hydrogen atom. The team attached a new ligand to iridium — a methyl group called 2-methylphenanthroline — that accelerated the reaction by 50 to 80 times over previous results.

Hartwig acknowledges that these experiments are a first step. The reactions vary from 29% to 85% in their yield of the final product. But he is working on improvements.

“For us, it shows, yeah, you can do this, but we will need to make even better catalysts. We know that the ultimate goal is attainable if we can further increase our rates by a factor of 10, let’s say. Then, we should be able to increase the complexity of molecules for this reaction and achieve higher yields,” Hartwig said. “It is a little bit like a four-minute mile. Once you know that something can be accomplished, many people are able to do it, and the next thing you know, we’re running a three-and-three-quarter-minute mile.”