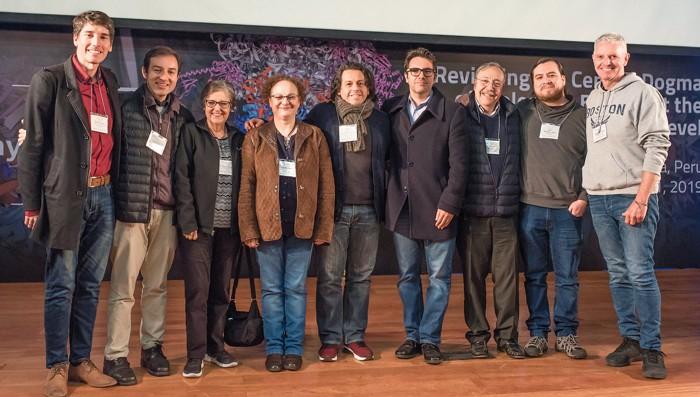 Carlos J. Bustamante (third from right) poses with his colleagues from throughout Latin America. Photo: courtesy of Carlos Bustamante.

Exercepted from an article where chemists worldwide tell C&EN what they value about international collaborations, at a time when some scientists might feel uncertain about their future.

In the mid-1970s,  Professor of Chemistry, Physics and, Molecular and Cell Biology Carlos J. Bustamante, left Peru to go to graduate school in the US. He intended to return, but political and economic turmoil prevented that. He wound up staying for a postdoc. He then joined the chemistry faculty at the University of California, Berkeley, where he works on single-molecule manipulation and detection.

Over time, however, Bustamante has been able to build scientific ties to his country of origin. He started by organizing chemistry courses in Peru. Then, in 2010, he established a lab at Cayetano Heredia University. "We always talk about brain drain" from developing countries, he says, and he hoped that extending his research program there would help the situation.

Starting a lab in Peru hasn't been easy, Bustamante says, between funding difficulties and a national focus on applied research. As the country's economy has stabilized, more funding is available, so more Peruvian scientists are returning. "Things are improving greatly," he says. Having a lab in Peru has led Bustamante to collaborations throughout Latin America, with researchers in Chile, Argentina, and elsewhere.

Recent tensions in the US around immigration and research security have hurt his efforts, Bustamante says. Students have to wait weeks or months to enter the US, and that is encouraging top students to choose Europe over the US. Policy makers "don't realize that the most important capital is human capital," he says. "Talent is everywhere, in all of the countries. By making it harder and harder for students to go to the US, we are shooting ourselves in the foot."