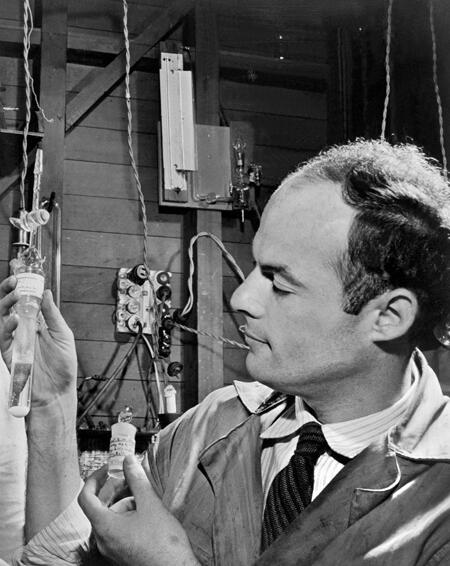 Samuel Ruben was born in San Francisco, November 8, 1913. He was awarded the B.S. degree in 1935 and the Ph.D. degree in 1938 by the University of California. His death, September 28, 1943, resulted from an accident in the laboratory while he was working as Official Investigator for the Office of Scientific Research and Development.

Rarely has the world of science known a young man so keen in analysis of complex problems and so resourceful in devising new and original techniques for their solution. He was not one to follow beaten paths. His genius lay in exploring new fields. His own scientific contributions were outstanding and the methods which he originated will be employed by generations of chemists in pursuing the ever-expanding circle of research which he initiated.

Dr. Ruben's greatest achievements resulted from the use of radioactive isotopes of the light elements as tracers to follow the course of biological reactions. He was codiscoverer of the isotope carbon 14, but many of his experiments were performed with the short-lived carbon II. In these experiments he displayed great ingenuity in devising methods which enabled the entire experimental procedures to be completed in the course of a few hours.

His research in photosynthesis received world-wide recognition. This work revolutionized traditional points of view which had been generally accepted, and the continuation of his method of attack promises to unravel the process of photosynthesis which has long remained so mysterious.

He was an inspiring teacher, handling equally well the large elementary lecture course and the small graduate seminar. His generosity and his unselfish expenditure of his own time and energy in helping others engendered the love and admiration of his colleagues.

In 1935 he married Helena West. He is survived by his widow and three children.

For several months preceding his death Ruben had devoted his full energy to a war research program, obtaining by his extraordinary talents important results within a very brief period. On the day of the accident, he had received a message requesting a certain experiment. The work was hazardous. In the manner so characteristic of his nature, he himself assumed the responsibility and shielded his assistants from the danger. The loss to science and the University is indeed great.