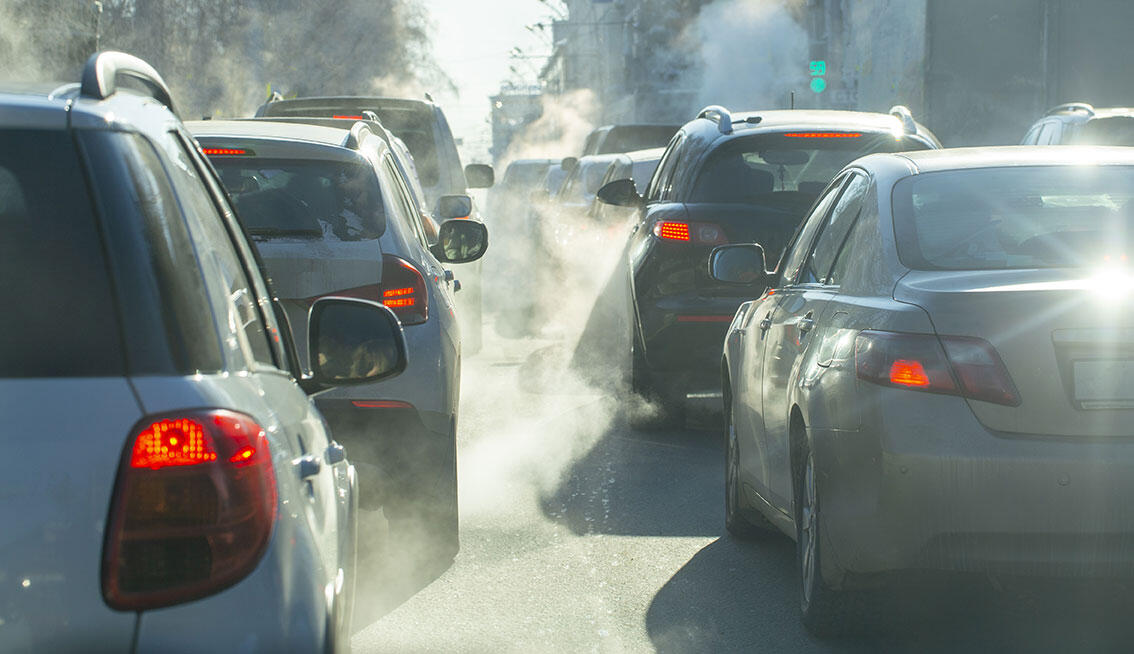 Cars powered by fossil fuels emit carbon dioxide (CO2), the most prevalent greenhouse gas. A team of scientists led by Berkeley Lab has developed a new technique that improves the conversion of CO2 emissions into useful chemicals and liquid fuels. (Credit: Adobe stock)

Cars powered by fossil fuels emit carbon dioxide (CO2), the most prevalent greenhouse gas. A team of scientists led by Berkeley Lab has developed a new technique that improves the conversion of CO2 emissions into useful chemicals and liquid fuels. (Credit: Rasulov/Shutterstock)

Carbon dioxide (CO2), a product of burning fossil fuels and the most prevalent greenhouse gas, has the potential to be sustainably converted back into useful fuels. A promising route for turning CO2 emissions into a fuel feedstock is a process known as electrochemical reduction. But to be commercially viable, the process needs to be improved, to select for, or to yield, a higher amount of desirable carbon-rich products.

Now, as reported in the journal Nature Energy, researchers at Lawrence Berkeley National Laboratory (Berkeley Lab) have improved the process’s selectivity by developing a new approach to modify the surface of the copper catalysts used to assist the reaction.

“Although we know copper is the best catalyst for this reaction, it doesn’t give high selectivity to the desired products,” said Alexis Bell, a faculty senior scientist in Berkeley Lab’s Chemical Sciences Division and professor of chemical engineering at UC Berkeley. “Our group has found that you can do various tricks with the local environment of the catalyst to provide that selectivity.”

In previous studies, the researchers had established the precise conditions that gave the best electrical and chemical environment for creating commercially interesting carbon-rich products. But those conditions are contrary to those that naturally occur in a typical fuel cell, which uses a water-based conductive material.

To pinpoint a design that could be used in the aqueous environment of fuel cells, Bell and his team, as part of the Department of Energy’s Liquid Sunlight Alliance Energy Innovation Hub project, turned to thin layers of ionomers, polymers that allow certain charged molecules (ions) to pass through while excluding others. As a result of their highly selective chemistry, they are uniquely suited to have a strong influence on the microenvironment. 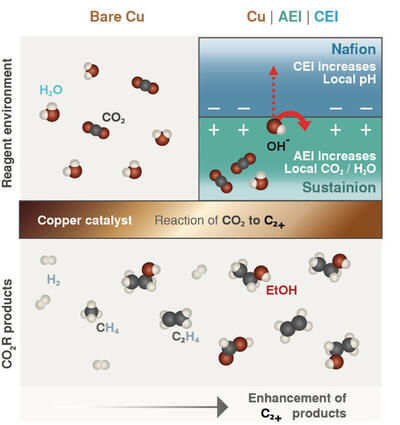 Chanyeon Kim, a postdoctoral researcher in Bell’s group and the lead author on the paper, proposed to coat the surface of the copper catalyst with two common ionomers, Nafion and Sustainion. Doing so, the team hypothesized, should modify the environment – including the pH and amounts of water and CO2 – in the catalyst’s immediate vicinity in a way that would steer the reaction to generate carbon-rich products that can be readily converted to useful chemicals and liquid fuels.

The researchers applied a thin layer of each ionomer, as well as a bilayer of both ionomers, to copper films supported by a polymer material, forming membranes that they could insert near one end of a hand-sized electrochemical cell. While feeding CO2 into the cell and applying a voltage, they measured the total current flowing through the cell. Then they measured the gases and liquids that collected in adjoining reservoirs during the reaction. For the two-layer case, they found that carbon-rich products accounted for 80% of the energy consumed by the reaction – up from 60% in the uncoated situation.

“This sandwich coating gives the best of both worlds: high product selectivity and high activity,” said Bell. The bilayered surface favored not only carbon-rich products, but at the same time generated a strong electrical current, indicating increased activity.

The researchers concluded that the improved reaction was a consequence of the high CO2 concentration that built up in the coating layer immediately on top of the copper. Additionally, negatively charged molecules that piled up in the region between the two ionomers created a low local acidity. That combination countered the concentration trade-off that tends to occur in the absence of the ionomer films.

To increase the reaction efficiency even further, the researchers turned to a technique that had been demonstrated before, without ionomer films, as another way to increase CO2 and pH: pulsing the voltage. By using a pulsed voltage with the bilayer ionomer coating, the researchers achieved a 250% increase in carbon-rich products compared to uncoated copper and a static voltage.

While some researchers have focused their work on developing new catalysts, catalyst discovery does not consider the operating conditions. Controlling the environment at the catalyst’s surface is a new and different approach.

“Rather than coming up with a brand new catalyst, we’ve taken what we know about the kinetics of a reaction and used that knowledge to guide our thinking about how to change the environment at the catalyst site,” said Adam Weber, a senior staff scientist in Berkeley Lab’s Energy Technologies Area and a co-author on the paper.

The next step is to scale up production of the coated catalyst. The Berkeley Lab team’s initial experiments involved small, flat model systems, which are far simpler to work with compared with the high-area, porous structures necessary for commercial applications. “It’s not hard to coat a flat surface. But a commercial approach might involve coating tiny copper spheres,” said Bell. Adding a second coating becomes challenging. One possibility is to mix and deposit the two coatings together in a solvent and hope that they separate as the solvent evaporates. And if they don’t? Bell concluded, “We’ll just have to get more clever.”

The story was originally published here>