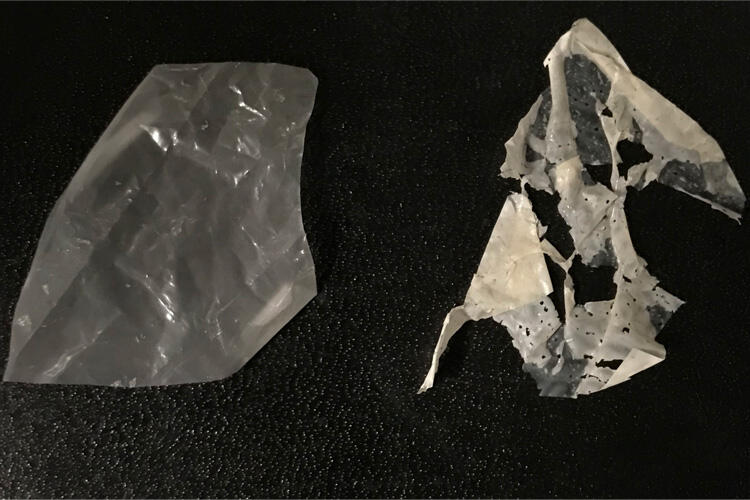 Biodegradable plastics have been advertised as one solution to the plastic pollution problem bedeviling the world, but today’s “compostable” plastic bags, utensils and cup lids don’t break down during typical composting and contaminate other recyclable plastics, creating headaches for recyclers. Most compostable plastics, made primarily of the polyester known as polylactic acid, or PLA, end up in landfills and last as long as forever plastics.

University of California, Berkeley, scientists have now invented a way to make these compostable plastics break down more easily, with just heat and water, within a few weeks, solving a problem that has flummoxed the plastics industry and environmentalists.

“People are now prepared to move into biodegradable polymers for single-use plastics, but if it turns out that it creates more problems than it’s worth, then the policy might revert back,” said Ting Xu, UC Berkeley professor of materials science and engineering and of chemistry. “We are basically saying that we are on the right track. We can solve this continuing problem of single-use plastics not being biodegradable.”

Xu is the senior author of a paper describing the process that will appear in this week’s issue of the journal Nature.

The new technology should theoretically be applicable to other types of polyester plastics, perhaps allowing the creation of compostable plastic containers, which currently are made of polyethylene, a type of polyolefin that does not degrade. Xu thinks that polyolefin plastics are best turned into higher value products, not compost, and is working on ways to transform recycled polyolefin plastics for reuse.

The new process involves embedding polyester-eating enzymes in the plastic as it’s made. These enzymes are protected by a simple polymer wrapping that prevents the enzyme from untangling and becoming useless. When exposed to heat and water, the enzyme shrugs off its polymer shroud and starts chomping the plastic polymer into its building blocks — in the case of PLA, reducing it to lactic acid, which can feed the soil microbes in compost. The polymer wrapping also degrades.

The process eliminates microplastics, a byproduct of many chemical degradation processes and a pollutant in its own right. Up to 98% of the plastic made using Xu’s technique degrades into small molecules.

One of the study’s co-authors, former UC Berkeley doctoral student Aaron Hall, has spun off a company to further develop these biodegradable plastics.

Plastics are designed not to break down during normal use, but that also means they don’t break down after they’re discarded. The most durable plastics have an almost crystal-like molecular structure, with polymer fibers aligned so tightly that water can’t penetrate them, let alone microbes that might chew up the polymers, which are organic molecules. 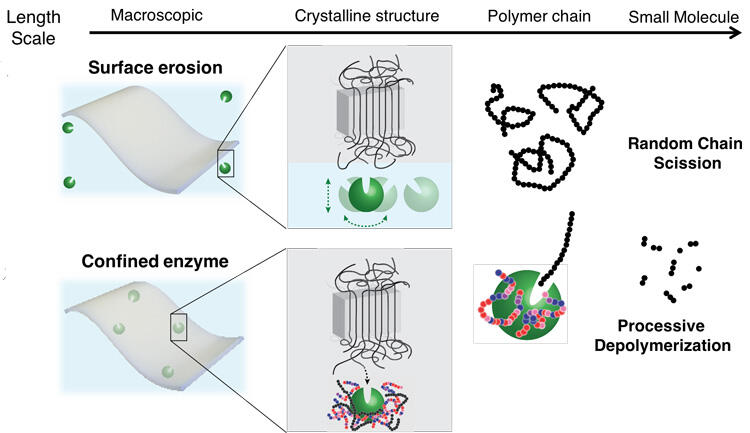 Enzymes such as lipase (green balls) can degrade plastic polymers from the surface (top left), but they cut up the polymer randomly, leaving microplastics behind (top right). A UC Berkeley group embedded enzyme nanoclusters throughout the plastic (lower left), protected by random heteropolymers (chains of colored balls). The embedded enzymes are immobilized near the end of the polymer chains and, under the right conditions of heat and moisture, degrade polymer molecules primarily from the chain end. This technique retains the plastic’s integrity during use but, when the user triggers depolymerization, the plastic goes all the way down to recyclable small-molecule by-products. (Graphic by Christopher DelRe)

Xu’s idea was to embed nanoscale polymer-eating enzymes directly in a plastic or other material in a way that sequesters and protects them until the right conditions unleash them. In 2018, she showed how this works in practice. She and her UC Berkeley team embedded in a fiber mat an enzyme that degrades toxic organophosphate chemicals, like those in insecticides and chemical warfare agents. When the mat was immersed in the chemical, the embedded enzyme broke down the organophosphate.

Her key innovation was a way to protect the enzyme from falling apart, which proteins typically do outside of their normal environment, such as a living cell. She designed molecules she called random heteropolymers, or RHPs, that wrap around the enzyme and gently hold it together without restricting its natural flexibility. The RHPs are composed of four types of monomer subunits, each with chemical properties designed to interact with chemical groups on the surface of the specific enzyme. They degrade under ultraviolet light and are present at a concentration of less than 1% of the weight of the plastic — low enough not to be a problem.

For the research reported in the Nature paper, Xu and her team used a similar technique, enshrouding the enzyme in RHPs and embedding billions of these nanoparticles throughout plastic resin beads that are the starting point for all plastic manufacturing. She compares this process to embedding pigments in plastic to color them. The researchers showed that the RHP-shrouded enzymes did not change the character of the plastic, which could be melted and extruded into fibers like normal polyester plastic at temperatures around 170 degrees Celsius, or 338 degrees Fahrenheit.

A film of PLA (polylactic acid) plastic immediately after being placed in compost (left) and after one week in the compost (right). Embedded with an enzyme, the PLA plastic can biodegrade to simple molecules, making it promising as a future alternative to a non-degradable plastic. (UC Berkeley photo by Adam Lau/Berkeley Engineering)

To trigger degradation, it was necessary only to add water and a little heat. At room temperature, 80% of the modified PLA fibers degraded entirely within about one week. Degradation was faster at higher temperatures. Under industrial composting conditions, the modified PLA degraded within six days at 50 degrees Celsius (122 F). Another polyester plastic, PCL (polycaprolactone), degraded in two days under industrial composting conditions at 40 degrees Celsius (104 F). For PLA, she embedded an enzyme called proteinase K that chews PLA up into molecules of lactic acid; for PCL, she used lipase. Both are inexpensive and readily available enzymes.

“If you have the enzyme only on the surface of the plastic, it would just etch down very slowly,” Xu said. “You want it distributed nanoscopically everywhere so that, essentially, each of them just needs to eat away their polymer neighbors, and then the whole material disintegrates.”

The quick degradation works well with municipal composting, which typically takes 60 to 90 days to turn food and plant waste into usable compost. Industrial composting at high temperatures takes less time, but the modified polyesters also break down faster at these temperatures. 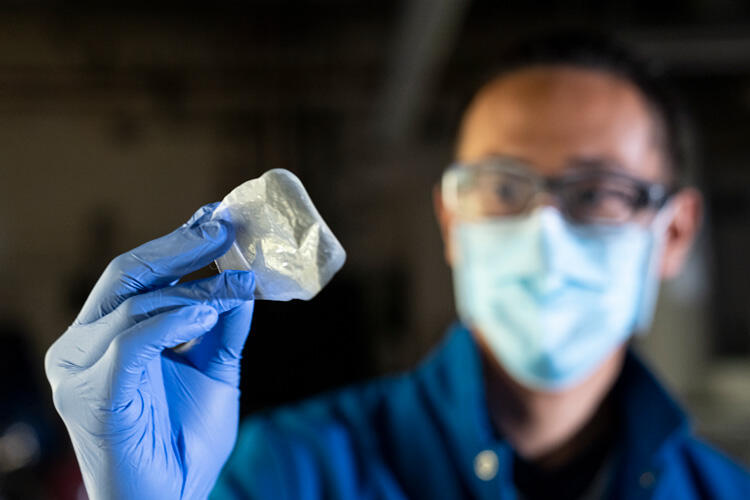 Xu suspects that higher temperatures make the enshrouded enzyme move around more, allowing it to more quickly find the end of a polymer chain and chew it up and then move on to the next chain. The RHP-wrapped enzymes also tend to bind near the ends of polymer chains, keeping the enzymes near their targets.

The modified polyesters do not degrade at lower temperatures or during brief periods of dampness, she said. A polyester shirt made with this process would withstand sweat and washing at moderate temperatures, for example. Soaking in water for three months at room temperature did not cause the plastic to degrade.

Soaking in lukewarm water does lead to degradation, as she and her team demonstrated.

“It turns out that composting is not enough — people want to compost in their home without getting their hands dirty, they want to compost in water,” she said. “So, that is what we tried to see. We used warm tap water. Just warm it up to the right temperature, then put it in, and we see in a few days it disappears.”

Xu is developing RHP-wrapped enzymes that can degrade other types of polyester plastic, but she also is modifying the RHPs so that the degradation can be programmed to stop at a specified point and not completely destroy the material. This might be useful if the plastic were to be remelted and turned into new plastic.

The project is in part supported by the Department of Defense’s Army Research Office, an element of the U.S. Army Combat Capabilities Development Command’s Army Research Laboratory.

“These results provide a foundation for the rational design of polymeric materials that could degrade over relatively short timescales, which could provide significant advantages for Army logistics related to waste management,” said Stephanie McElhinny, Ph.D., program manager with the Army Research Office. “More broadly, these results provide insight into strategies for the incorporation of active biomolecules into solid-state materials, which could have implications for a variety of future Army capabilities, including sensing, decontamination and self-healing materials.” 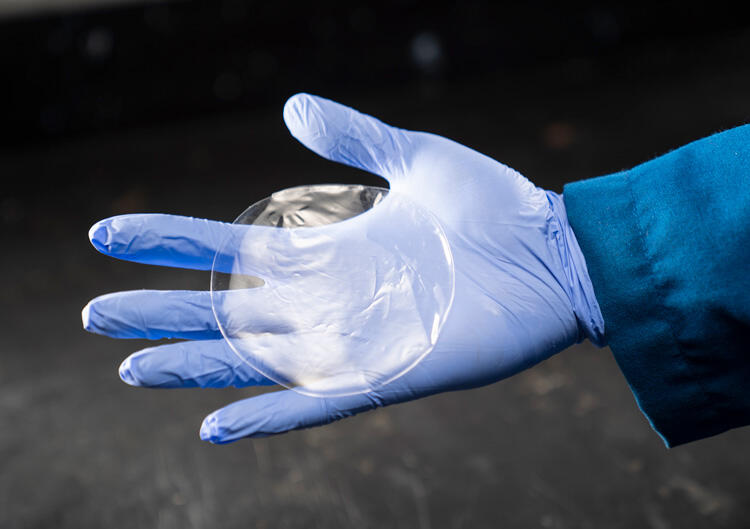 A film of PLA (polylactic acid) plastic embedded with an enzyme to make it biodegrade quickly in regular compost. (UC Berkeley photo by Adam Lau/Berkeley Engineering)

Xu said that programmed degradation could be the key to recycling many objects. Imagine, she said, using biodegradable glue to assemble computer circuits or even entire phones or electronics, then, when you’re done with them, dissolving the glue so that the devices fall apart and all the pieces can be reused.

“It is good for millennials to think about this and start a conversation that will change the way we interface with Earth,” Xu said. “Look at all the wasted stuff we throw away: clothing, shoes, electronics like cellphones and computers. We are taking things from the earth at a faster rate than we can return them. Don’t go back to Earth to mine for these materials, but mine whatever you have, and then convert it to something else.”