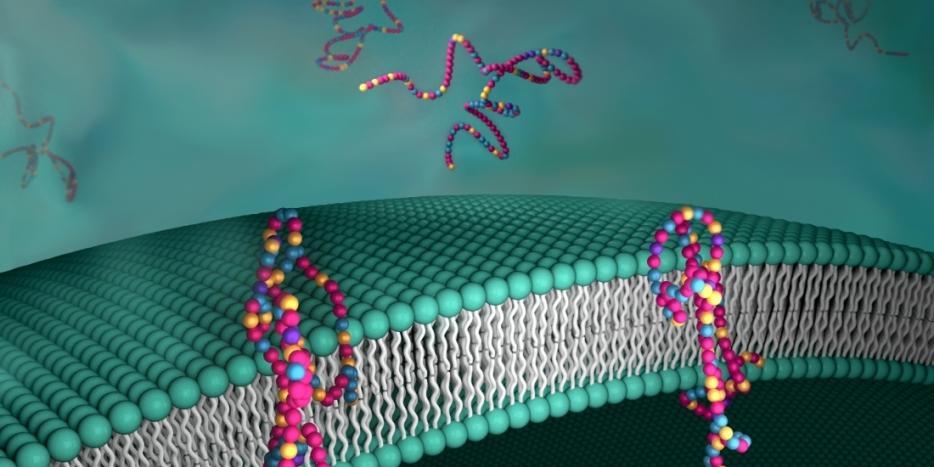 Researchers, led by UC Berkeley lead investigator Ting Xu, Professor of Chemistry & Materials Science and Engineering, have created a synthetic material that is as effective as naturally occurring proteins in transporting molecules through membranes, a major milestone that could transform such fields as medicine, life sciences, alternative energy and environmental science.

Mimicking transmembrane proteins, which act as gatekeepers in living cells, has been a key goal — and a significant bottleneck — in synthetic membrane development for applications such as water desalination, batteries, pharmaceutical and biofuels research. This new achievement, described in a study published today in the journal Nature, could alleviate that jam.

In collaboration with labs at UC Santa Cruz, Northwestern University and Oak Ridge National Laboratory, the researchers designed a polymer that selectively transported protons — charged subatomic particles — across an acrylic film at a rate similar to those of natural proton channels while successfully filtering out other types of cations.

Selective and rapid proton transport is important in the regulation of pH levels and many biological functions. That capability is also useful for clean energy such as fuel cells and energy storage.

“If we think of the polymer as a doorway, it had to be open wide enough for the proton to go through, but not so open that other cations can sneak in,” said Ting Xu. “We were able to find that right balance with our material.”

The paper also provided a solution to a long-standing challenge in designing synthetic proteins that worked like their natural counterparts. Monomer molecules bond together to form polymers, and amino acids are monomers that form proteins. The monomer sequence governs protein function, so for decades scientists believed that they had to copy the monomer sequence exactly to create a synthetic polymer that would function as well as naturally occurring proteins.