A network of cubes opens the door for new COF chemistry 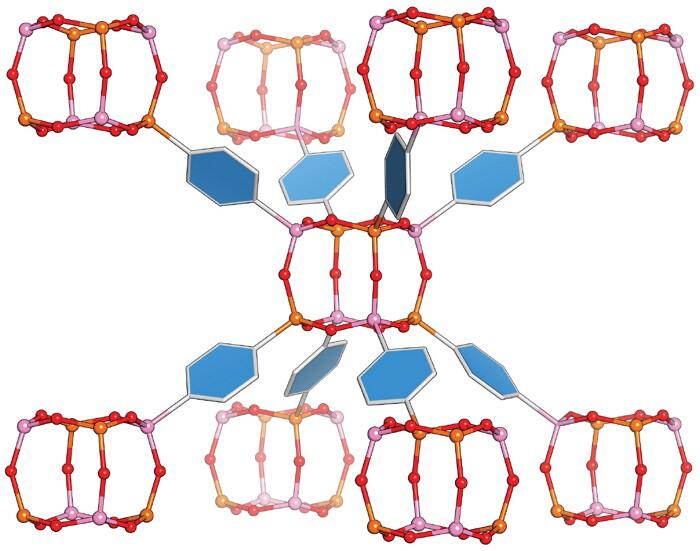 Covalent organic frameworks (COFs) offer many of the benefits of metal organic frameworks (MOFs) yet haven’t kept pace with the growing number of complex architectures achieved by their metal-containing counterparts. But a new COF created by researchers at the University of California, Berkeley, opens the door for organic frameworks with higher connectivity than ever before.

Previous COF architectures were limited by the geometry of carbon bonds, says Omar M. Yaghi, a reticular chemist who led the study. Inspired by 3-D structures made by borophosphonate bonds, Yaghi’s team designed a borophosphonic acid linker with a boron group on one end of a phenyl ring and a phosphorus group on the other. When the linker is heated in solution with a modulator that controls the reaction rate, a COF of repeating borophosphate cubes self-assembles (Science 2020, DOI: 10.1126/science.abd6406).

“It’s almost like a jigsaw puzzle piece,” Yaghi says. “When eight of these [linkers] come together, they make a cube.” Each assembled cube thus creates eight new sites to build additional cubes. Because the borophosphonate bonds are formed by a dehydration reaction, the team can create a highly organized, repeating structure of cubes by controlling the amount of water released. Once isolated in its crystalline form, the new COF is thermally stable up to 500 °C.

The researchers were surprised to find that the polycubane COF could be converted to sheets of interlocking linker chains in the presence of acid, yielding an entirely new architecture from the same starting material. They suggest that even more architectures will become accessible as the team continues to explore the versatility of the borophosphonic acid linker.

The elegance of this strategy is in its simplicity, says F. Akif Tezcan, a chemist at the University of California San Diego who was not involved in the study. 3-D borophosphonate structures have previously been studied as finite molecules, he says, “but it takes the right person to be able to connect the dots.”

Yaghi suggests that the new complexity now accessible from a single linker molecule could have a “tremendous impact” on the future of COF chemistry. His team is also working on optimizing the new material for hydrogen storage and other applications.