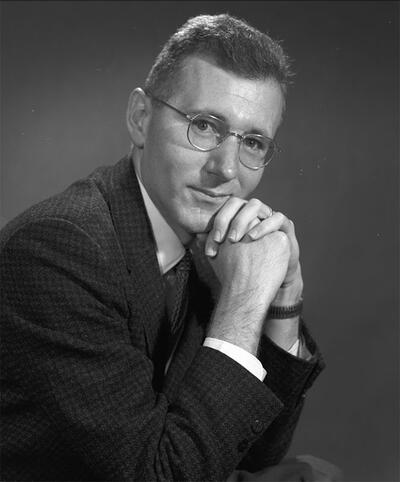 Rolf Hugo Muller, long time lecturer in chemical engineering at UC Berkeley, was born August 6, 1929 in Aarau, Switzerland. Pursuing his interest in science, he obtained his degrees in chemistry from the Swiss Federal Institute of Technology in Zürich. He emigrated to the United States in 1957, seeking wider professional opportunities. He first worked in research with DuPont in Parkersburg, WV. His accomplishments there impressed Charles Tobias, a founding faculty member of the Department of Chemical Engineering at Berkeley and senior scientist at the Lawrence Berkeley National Laboratory (LBNL), who recruited him to join the new Inorganic Material Research Division of LBNL in 1960.  That connection also led Rolf to be a lecturer in that department, where for thirty years he gave a well-respected graduate course on optical methods for research in chemical engineering and supervised the research of graduate students and postdocs, while also collaborating with visiting scholars. Rolf’s entire subsequent research career was with LBNL, where he also eventually became associate director of the Materials and Chemical Sciences Division.

Rolf Muller was one of the pioneers in the application of optical methods to the study of mass transport in electrochemical technologies. He used interferometry to measure concentration profiles at electrodes under current flow with natural or forced convention of electrolyte. These results played an essential role in the development of the mathematical models of mass transport in porous electrodes in batteries and fuel cells by his colleague, UC Berkeley professor John Newman, and in electroplating systems by Charles Tobias. Some fifty years later, his demonstration of a stable meniscus on a metal surface partially immersed in electrolyte was utilized by a team of investigators at beamline 9.3.1 at the Advanced Light Source to observe photoemission from an electrode surface in-situ.

Rolf expanded his scientific/engineering vision to the use of spectroscopic (i.e., wave-length dependent) ellipsometry to study the composition and thickness of the passive film on metallic lithium in lithium primary batteries. He designed and constructed his ellipsometer before any were commercially available, and also designed some of the first electrochemical cells to utilize optical spectroscopies such as ellipsometry and electroreflectance. Lithium primary batteries were commercialized after ca. 1960, based on seminal work by Charles Tobias and his students, and Rolf’s follow-up studies were essential for understanding their functioning and stability. Metallic lithium anodes for rechargeable lithium batteries are now in vogue as part of “Beyond Lithium-ion” chemistries, and Rolf’s pioneering papers will no doubt be revisited and influential. Rolf retired from LBNL in 1991.

While with DuPont in the late 1950s, Rolf suffered severe injuries in an automobile accident. He came to know the head nurse at the hospital where he was treated. The bond between Dorothy and Rolf grew, and their marriage, which took place shortly after he came to Berkeley in 1960, endured strongly until her death in 2005. His brother Jorg also predeceased him, in 2007.

In everything he did, Rolf was a constructive and helpful person and a good friend to his many colleagues. His primary avocation was painting, which he started as a youth, and to which he returned after his retirement. His handsome Christmas cards displaying his paintings were appreciated annually by friends. He focused on landscapes and was an active member of a local group that traveled to various places, such as the Napa Valley, to paint. He also enjoyed playing piano, had a substantial music collection, and was an avid gardener of fruits and vegetables. He and Dorothy were the team leads of their local community emergency action teams.

Rolf passed away at his Kensington home on March 2, 2020. Rolf and Dorothy are survived by their two children, Wilhelm (Will) Muller, a dedicated, long-time teacher of fourth grade in nearby San Pablo and Alice, now an administrator for the Energy Storage and Distributed Resources Division of LBNL.

Remote
The service will be broadcast via a private YouTube link. If you are interested in attending remotely, please email his daughter Alice Muller at amuller2@lbl.gov(link sends e-mail) and she will send the YouTube link.

In lieu of flowers donations can be made in Rolf Muller's name to: Vitas Hospice. The family was given amazing support through Vitas out of their Walnut Creek office.