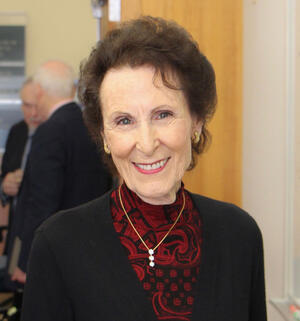 I write to share the sad news that Jane Scheiber, beloved colleague and former Assistant Dean of College Relations & Development in the College of Chemistry, passed away on March 6, 2022 after an arduous battle with cancer. Her husband, Harry Scheiber, and her family, whom she so dearly loved, were with her when she passed.

As assistant dean, Jane was responsible for the development of a cohesive set of fundraising, alumni relations, and public affairs programs for the College. During her tenure (1986-2009), she championed development activities that brought in more than $165 million. Jane played a key fundraising role in the College’s most important capital projects, including Tan Kah Kee Hall, Pitzer Center, and the renovation of research laboratories in the upper Latimer and Lewis Halls. Jane created and oversaw the establishment of 19 endowed chairs, 39 fellowship funds, 12 scholarship funds, and 16 discretionary funds in the College. She also established the Industrial Friends Program, as well as a 25-member College Advisory Board, which has since been extremely beneficial for the College.

Jane had the opportunity to work with seven deans during her tenure: Jud King, Bob Connick, Brad Moore, Alex Bell, Clayton Heathcock, Charles Harris, and Rich Mathies. Jane was a truly talented and dedicated campus leader who provided 26 years of exceptional service to the UCB College of Chemistry, as well as 11 years to UC San Diego.

Jane had the special ability to cultivate relationships and was beloved by many alumni and friends. She forged genuine personal connections with our alumni, and she was a very caring and dedicated ambassador for the College and the university.

Jane’s commitment to Berkeley never diminished. Following her retirement, she took on a volunteer position as Special Assistant to the Dean and continued with a number of ongoing development projects. As one of our beloved alumni, T.Z. Chu, noted, “Jane is a scholar in her own right, having published a number of articles in academic journals and presented papers at professional conferences…and with her husband co-authored Bayonets in Paradise: Martial Law in Hawaii During World War II…In every way, she gained honor and respect for Berkeley.”

Upon Jane’s retirement, she received the Berkeley Citation, which is awarded to select individuals whose contributions to campus go beyond the call of duty and whose achievements exceed the standard of excellence in their fields. The Berkeley Citation was fitting recognition for Jane’s exemplary career at Berkeley.

Please join me in honoring our distinguished colleague, Jane Scheiber, who will be greatly missed.

Note: If you wish to make a donation in honor of Jane, checks to "The Harry and Jane Schieber Lecture in Ocean Law and Policy" can be sent to UC Berkeley Gift Services, 1995 University Ave, Suite 400, Berkeley, CA 94704-1070.