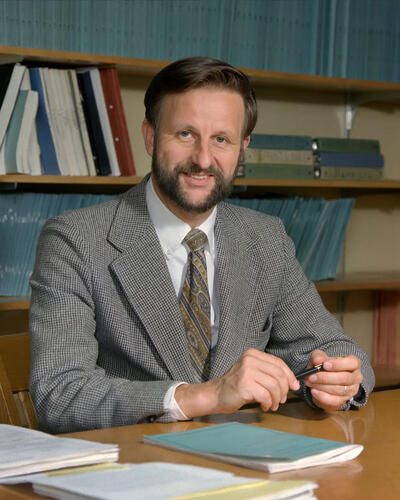 David Arthur Shirley, former director of Lawrence Berkeley National Laboratory (Berkeley Lab) and professor of chemistry at the University of California, Berkeley, died on March 29, 2021, of age-related illness. Shirley was a pioneer of electron spectroscopy, a teacher, a mentor, and an extraordinary scientific leader with broad vision, who spearheaded the creation of the Advanced Light Source at Berkeley Lab and helped motivate the construction of third-generation synchrotron radiation facilities in the U.S. and around the world. He is survived by his wife, Barbara Shirley, and five children.

Born in North Conway, New Hampshire, on March 30, 1934, Shirley earned a Bachelor of Science degree in chemistry from the University of Maine in 1955. He then entered UC Berkeley, where he completed his Ph.D., writing his 1959 doctoral thesis on “The heat capacities and entropies of iodine and lithium chloride from 15 to 325 degrees Kelvin,” under the supervision of William Giauque.

Shirley became a lecturer in chemistry at UC Berkeley in 1959 and rapidly rose through the academic ranks to become chairman of the chemistry department in 1968. He was a National Science Foundation fellow at Oxford University in 1966-67, was awarded the U.S. Atomic Energy Commission’s Ernest Orlando Lawrence Award in 1972, was elected to the National Academy of Sciences in 1978, and received an honorary degree from the Free University of Berlin in 1987. His early research was on low-temperature physics, nuclear orientation, and hyperfine interactions, particularly the Mössbauer effect. Later, he helped pioneer X-ray photoelectron spectroscopy, work that grew into strong research programs in atomic, molecular, and solid-state spectroscopy, first using Lab-based sources and then using synchrotron radiation at the Stanford Synchrotron Radiation Lightsource.

In 1975, Shirley became Berkeley Lab’s associate laboratory director and headed the Materials and Molecular Research Division. He served as Berkeley Lab’s fourth director from 1980 to 1989, the first chemist to lead the Lab. His appointment and tenure as Berkeley Lab director marked a dramatic diversification of research activities at the Lab, which since its founding in 1931 had focused largely on nuclear and particle physics. He expanded the Lab’s efforts in cancer research and oversaw its selection in 1987 to participate in the Human Genome Project. He established the Center for X-Ray Optics (CXRO), the world’s first research facility specializing in the use and application of soft X-rays and extreme ultraviolet light. That led to a proposal to construct the Advanced Light Source (ALS), the first “third-generation” electron synchrotron optimized to produce soft X-ray light, based primarily on permanent-magnet undulators. The case for a facility optimized for the soft X-ray regime was not universally supported, especially so soon after the commissioning of the National Synchrotron Light Source, a second-generation facility at Brookhaven National Laboratory. Subsequent extended discussions led to a balanced plan to construct both the ALS at Berkeley Lab and the Advanced Photon Source, another third-generation facility, but optimized for hard X-ray science, at Argonne National Laboratory.

Built on the historic site of Ernest Lawrence’s 184-inch cyclotron, the ALS was the first synchrotron to be built at Berkeley Lab in almost 30 years. One of Shirley’s primary legacies, the ALS has now been operating for 28 years. It has had a large impact on the development and use of tools that employ light – from the infrared to the hard X-ray regime – to probe the physical and chemical properties of diverse systems. CXRO has been a strong partner and user of the ALS and has played a major role in the development of extreme ultraviolet lithography, a technology that was recently commercialized in the iPhone 11. Today, few would challenge Shirley’s vision about a facility optimized for soft X-ray science.

Shirley stepped down as director of Berkeley Lab in 1989 but remained at UC Berkeley as a professor. In 1992 he accepted a position as senior vice president for research and dean of the graduate college at Pennsylvania State University. There, he increased the number of minorities in graduate school, reduced the average time to graduation, and placed the research enterprise on sound financial footing. He retired in 1996, living in Berkeley, Hawaii, Palm Springs, and Arizona until his death. He leaves a remarkable and highly impactful legacy, through the several dozen junior and senior scientists who worked with him as well as through his successful development, advocacy, and implementation of a vision for synchrotron light sources in the U.S.