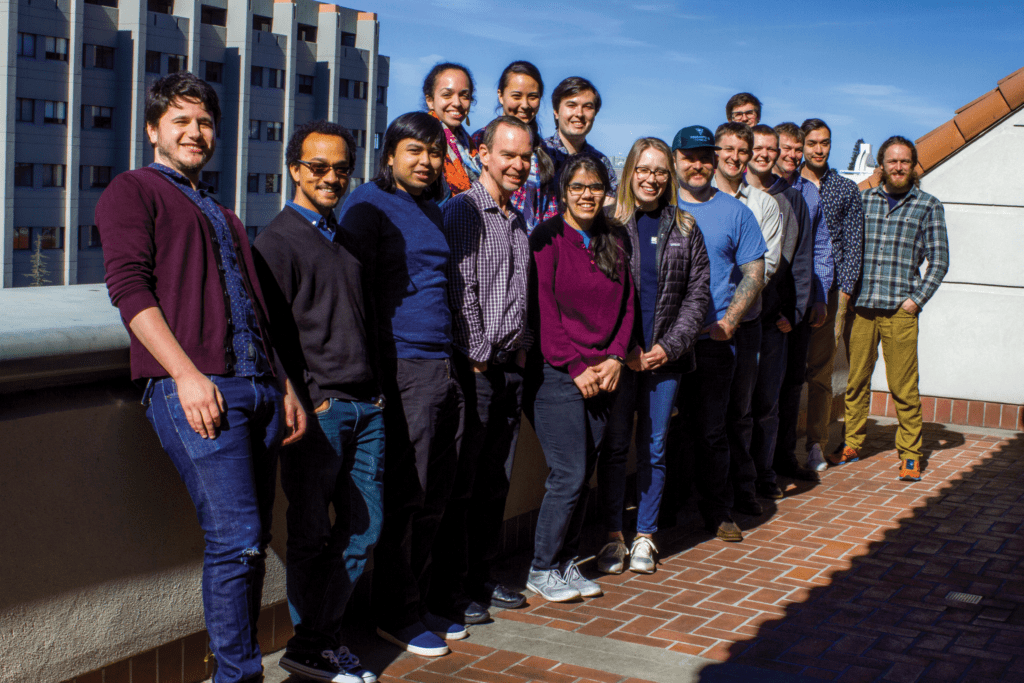 Matthew Francis (third from right) and the Chemistry Graduate Life Committee, consisting of both faculty and graduate students.

May 13, 2019
by Emily Hartman and Chrissy Stachl | Berkeley Science Review

It started with whispered rumors that were only discussed behind closed doors. That graduate students felt isolated—excluded, even. That advisors were disconnected from their students. And that positive change was needed. We were just two graduate students who knew that having data could be powerful and give voice to these rumors. In the right context, data could become a forum that would allow the people to speak.

So we wrote the first draft of our academic climate survey. We wanted to know how people actually feel about the Department of Chemistry at UC Berkeley. What is the culture like in the department, and how does it impact the people that hope to thrive there? We had so many questions we wanted to ask the community. How supported do people feel—emotionally, financially, academically? How available are their mentors? The first time we sat down with a survey expert, we were kindly told that we were asking too many questions. It took nearly two years to write the final version.

By the end of those two years, a grassroots movement had begun to grow—a movement to make the Department of Chemistry a more diverse and inclusive space. The movement eventually included a large swathe of the department—graduate students, faculty, staff, and more—all working together on a variety of new initiatives. Through their efforts, members of the department were able to give voice to the things that they wanted to change.

One important figure in the movement is the current chair of the Department of Chemistry, Professor Matthew Francis. His top-down support is helping to institutionalize many of the changes that department members have requested. In the past year, the Department of Chemistry has begun incorporating student voices and opinions into the faculty hiring process. Other members of the department have worked to destigmatize mental health issues and make departmental resources, like the graduate student handbook, more thorough and accessible. Step by step, we can all see that the department is changing, and we believe that much of the movement’s energy and success is due to Francis’s commitment to amplifying student voices and reducing barriers to change.

While articles about diversity initiatives often focus on the student perspective, we wanted to hear Francis’s take on changes within the chemistry department, so we sat down with him to learn more about his experiences throughout the past several years.

EH.&.CS: Can you tell us more about what it’s like to be involved in diversity and inclusion efforts as a professor?

MF: One of the first realizations you have when working on diversity initiatives is that everyone is more on the same page than you might expect. It turns out that there have been very few times where faculty and students haven’t fundamentally agreed on what needs to happen in the department. It makes me very proud of both the students and my colleagues to see how excited they are to [work on these efforts]. We’re all really busy, and we all have drains on our time, yet almost every single person who has been engaged in these efforts is very willing to contribute.

EH.&.CS: Do you see any significant differences when speaking with faculty and students about diversity initiatives?

MF: Not really. There are probably nuanced differences in perspective about how to go about it, but I think it is really positive that the will to change the department is uniform. And we actually have data to back that up. In the climate survey, we found that faculty and students were very much in agreement. Especially on increasing faculty diversity, and in particular, with respect to [hiring more] female faculty. Just knowing that both sides agree is a powerful thing.

EH.&.CS: How has the relationship between students and faculty changed over the last ten years?

MF: One thing I’ve always loved about this department is that there is a low barrier between the students and the faculty. When you have that low barrier, it allows you to work collaboratively, and this already comes across in the research in the department. What has shifted in the last 10 years is that it’s happening in other aspects of our community as well. The health of the department is becoming more of a shared mission, and there’s involvement, activism, and energy from the graduate students that is productive and exciting. That energy was there 10 years ago, but somehow it’s more welcomed now. I don’t want to speak for everybody, but that’s my perspective.

EH.&.CS: What changes is the department working to implement right now?

MF: The first big change that we’ve made is to formalize the process of getting graduate student input in [faculty] hiring decisions. It has been very successful this year. [Note: graduate students now meet with faculty, ask questions about mentorship, diversity, and teaching, and then provide written feedback to the hiring committee]. The faculty were very impressed by the depth and quality of the analyses that the students provided on faculty candidates, and it did have an influence in the decisions that were made. We want this change to be permanent—that’s for sure. We may tweak it, but it has worked rather well. We are at a very interesting time in terms of faculty hiring in the department. In all likelihood we will hire more faculty in the next few years than we have in recent history. It’s a great opportunity to really think about what the cutting-edge areas and needs are for us, both scientifically and professionally. When you look at the population of the state around us, or the population of the undergraduate students that we serve, the demographics of our faculty do not match either. The graduate program is improving in that regard quite well, and I’m proud of that. But it has to start with the faculty. At the end of the day, we want everybody who wants to be a chemist to be able to reach that goal and feel welcome here. Having a faculty that reflects the broadest possible diversity is important from that perspective.

EH.&.CS: Have you learned anything that surprised you from discussions with students?

MF: One thing that came up in discussions is the perceived lack of transparency in some aspects of the department [such as hiring]. There was no effort to create that atmosphere—it just never occurred to us to talk about these things. There have been more efforts by me, and others before me, to increase that communication. We’re now sharing information and talking more, and that’s really helped.

EH.&.CS: What do you see as the major roadblocks to making social change within the department?

MF: When you want to make social change, or changes to a department, people need to participate and work together. We can do that. But some of it does involve financial resources that are limited. One example would be giving stipend support for graduate students who are involved in running important organizations in the department. Unfortunately, we don’t have enough of those resources. It always requires a lot of creativity and a lot of effort to figure out how to keep the money flowing in order to support these initiatives. And everything gets more expensive as time goes on. The good news is that I don’t think that there are roadblocks that come from anyone’s fundamental attitudes. People want to work together on these things.

EH.&.CS: If there was one thing that you could just snap your fingers and do or change, what would it be?

MF: I think a lot about how we can institutionalize these changes in a way that will make them propagate into the future, rather than revisiting them again and again. I do feel that it’s important for us as a top-ranked university to have the best academic climate for all members of the department, and I do think we have many positive aspects about our current atmosphere. That said, I would really want to make sure that the climate is sustainable, both in terms of future faculty hiring and graduate student recruitment. If we don’t attract the very best grad students in the world, then how can we sustain the quality of the program? It really is all about the students.

EH.&.CS: Can you give one piece of advice for students moving forward?

MF: It’s an invitation—we have a really exceptional group of students who have been involved in these issues, but we need to keep that going. New students should be encouraged to take up the cause. And the other thing is to tell us if something needs to change. We’re very busy with all the research and teaching that we’re here to do, but at the same time, taking the effort to talk with me or others in the department and make concerns known is the first step to improving. The door is always open.