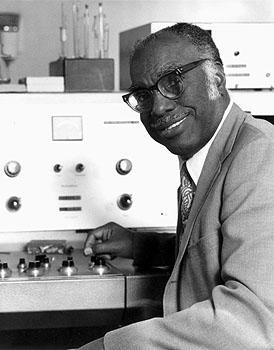 Dr. Lloyd Noel Ferguson (B.S., '40; Ph.D. '43, Chem) was a brilliant chemist, a dedicated teacher and mentor, and an ardent supporter of young Black people entering the fields of chemistry and chemical engineering. Dr. Ferguson regularly faced racism as he navigated his way through his education and career.

Dr. Ferguson was the first Black person to earn a Ph.D. in chemistry from the University of California, Berkeley, only three years after earning his undergraduate degree. His thesis was entitled "Absorption Spectra of some Linear Conjugated Compounds". His advisor Gerald E. K. Branch was considered the founder of theoretical organic chemistry at Berkeley and worked closely with G.N. Lewis who was dean of the College at the time.

It was not typical for undergraduates to stay on for their doctoral work in the College. Students were (and still are today) encouraged to go onto other institutions for breath of learning and experience. Dr. Ferguson had to request permission from G.N. Lewis to continue his studies at the College.

According to Dr. Ferguson in a 1992 oral interview at UC Berkeley, "Well, I guess I always thought in terms of wanting to teach and therefore I needed a Ph.D. I just sort of expected that I would do that. I was lucky to be able to do it here in Berkeley because, at that time, the general policy was not to accept their own undergraduate students for graduate work. ...That's when I inquired about going to graduate school here. Dean [Gilbert N.] Lewis thought it over and then finally accepted me. So I was very pleased about that."

During his graduate studies, Ferguson worked with Nobel Laureate Melvin Calvin on a project aimed at finding a material that would release oxygen for use in submarines. The solution was a hemoglobin-like material that, when heated, releases stored oxygen. 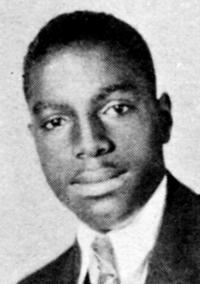 Dr. Ferguson was born and raised in Oakland, California. He grew up during the depression moving back and forth between the homes of his parents and grandparents.  (Photo: 1934 high school senior portrait.)

He was an aspiring chemist from a young age, building his first lab in his parent's backyard. By the time he finished high school at the age of 16, he had developed a moth repellent, spot remover, silver polish, and a lemonade mix. A budding entrepreneur, he sold some of his inventions to his neighbors.

Because of the financial crisis of the times, Dr. Ferguson had to work after he finished high school to raise the money to go to college. His first job was with the WPA working on a dock construction project in Berkeley, Ca. He later took a position as a porter with the Southern Pacific Railway. He was able to save enough money to go to school in two years. He continued with the railway until graduate school when Glenn Seaborg offered him a position working in the [Donner] radiation laboratory. After several months, he went to work for Melvin Calvin which set him on the path of becoming an organic chemist. According to Dr. Ferguson in his 1992 interview:

... Our wartime objective was to find a reversible source of oxygen for high-altitude aviation, submarines, and battleships. Up to that time, battleships, when going into a skirmish, would throw their tanks of oxygen overboard because if the top of the tank were knocked off by military action, then the tank itself would be a missile and could go through several walls. So they would get rid of them.

Then after the skirmish, when they might need some oxygen for welding and so forth, they had none. During World War I they tried sodium peroxide which they could heat to generate oxygen. But you could only do that once. After you heated it and got the oxygen from it, you had this dead weight of chemical left behind with no additional oxygen available. The objective was to find something that you could heat to get oxygen and then some way it would restore itself and you could heat it some more and get more oxygen.

So that was what we were trying to develop. In simple terms, we sought a substance which absorbs oxygen from the air and releases it when needed, much like a chemical in the blood absorbs oxygen from the air and releases it to the lungs. After doing so, it absorbs more oxygen and the process repeats itself over and over. There were several centers where work was going on on that same project: one at UCLA, one at MIT, Iowa State, and here at Berkeley under Calvin.

Actually, it turned out that the material that we produced was the one that was finally developed and put into use.

Dr. Ferguson received his Ph.D. in 1940 after only three years as a doctoral candidate.  He was planning to pursue a job in industry, but was advised that no one would consider hiring him. He states, "Later, when I was about to get my Ph.D. degree, I noticed that none of the recruiters set up interviews with me. Then, I realized that it was going to be a little difficult in getting a job, as Professor Stewart [his undergraduate advisor] had said. It just so happened at that time, an announcement of a teaching position came into the department at a Black school in North Carolina, Agriculture & Technology College (NCATC). So the secretary gave it to me and I investigated and found out it seemed to be a good institution at which to work. I applied for the job and got appointed assistant professor there in Greensboro."

He joined the faculty at NCATC in 1944, moving to Howard University the following year where he taught chemistry for 20 years. He was the chair of the chemistry department from 1958 to 1968. Also, he established the first Ph.D. program in chemistry at any historically Black college or university in 1958.

Dr. Ferguson left Howard University to join the chemistry department at California State University Los Angeles in 1965. He retired in 1985. He was the department chair from 1968 to 1971.

Dr. Ferguson authored more than 50 journal articles and seven textbooks. His research included the investigation of the structure of carbon-based molecules, the relationship between structure and biological activity, and cancer chemotherapy. Over a span of 20 years, he also explored the function of the human sense of taste. In particular, he investigated the molecular differences between substances that taste sour and those that taste sweet -- and tried to find out why some molecules of very similar structure do not produce any taste.

Dr. Ferguson was relentless in creating opportunities for Black people interested in chemistry and biochemistry. He was a cofounder of the National Organization for the Professional Advancement of Black Chemists & Chemical Engineers. The organization named an award after him that reflected his passion for bringing up the ranks of young Black chemists—the Lloyd N. Ferguson Young Scientist Award for Excellence in Research.

Listed below are links to several inspiring interviews of Dr. Ferguson about his life experience as a Black scientist conducted by the History Makers Project, an oral history project documenting the lives of African-Americans, and by the UC Berkeley alumni project. Dr. Ferguson candidly discusses some of the racist challenges he faced during his life in the interviews. Further biographical resources about Dr. Ferguson's life are also listed.