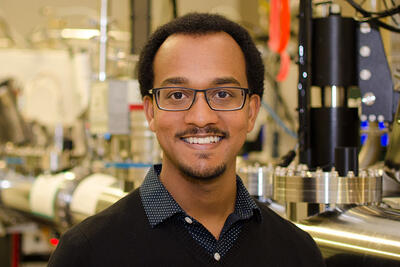 Kwabena Bediako, the Cupola Era Assistant Professor of Chemistry at UC Berkeley, has been announced as a 2020 CIFAR Azrieli Global Scholar. The program supports outstanding early-career researchers through mentorship, a global network, professional skills development, and unrestricted research support for two years. Thirteen researchers were announced this year from a qualifying group of 184 spanning 31 countries. These individuals are among the top emerging global researchers with citizenship in six countries and appointments in institutions in Canada, France, Germany, Ireland, the United Kingdom, and the United States. Scholars were chosen in the fields of child and brain development, learning in machines and brains, quantum information science, and quantum materials.

Bediako will be pursuing research in quantum materials. Bediako said of the research, “Through an iterative process of synthesis, device fabrication, and measurement, my research group seeks to design, create, and study totally uncharted classes of solids with a specific focus on tailoring interactions of charged particles (like electrons and ions) at a fundamental level.”

CIFAR Azrieli Global Scholars join CIFAR research programs for 24 months where they collaborate with fellows and contribute new approaches toward the most important questions facing science and humanity. Following the program, many scholars stay connected to the CIFAR community as fellows, Canada CIFAR AI Chairs, and workshop participants.

“Early-career researchers have the brilliant ideas that will change the world, and we want to help them develop and grow as researchers and professionals,” says Alan Bernstein, CIFAR President & CEO. “These thirteen scholars join an incredible community of researchers from around the world, interested not just in advancing knowledge in a silo, but in seeing the impact that knowledge can have across disciplines and on the wider world.”

The CIFAR Azrieli Global Scholars program is made possible through generous funding from the Azrieli Foundation with additional support provided by the Love Family Leadership Development Fund as well as other individuals, corporations and foundations.