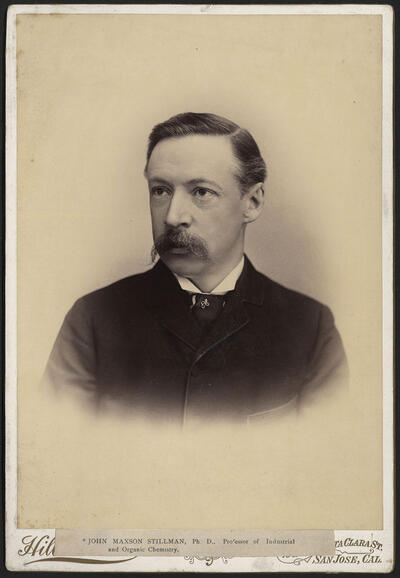 Born the son of a physician in New York city in 1852, Professor Stillman spent most of his life in California. In 1870 he entered the University of California which had opened its doors the year before and was at that time located in Oakland. He started out studing physics but became interested in chemistry and in his senior year was appointed assistant in this subject. He was the best student of his day at the University. On graduation in 1874 he was offered the post of private secretary to Ex-governor Leland Stanford, but declined in order to continue the study of chemistry. The first year after graduation was spent as student and assistant at California, and the second in the study of organic chemistry at the German universities of Strassburg and Wiirzburg. In Wiirzburg Stillman came into contact with J. A. Wislicenus, just then engaged in his advocacy of the new stereo-chemical theory of the obscure young J. H. Van't Hoff, who had been stimulated largely by Wislicenus' study of the lactic acids. Stillman took considerable part in student life in Germany, even going so far as to join a Bur- schenschaft. The mellow atmosphere perhaps favored the development of that perspective and tolerance which became the most prominent qualities of Stillman's scientific mind at maturity.

On his return to the United States in 1876, Stillman was appointed instructor in organic and general chemistry at Berkeley, a post in which he remained for six years. During this stage of his development, Stillman's chief interest was in chemical research. This is evidenced by the publication between 1879 and 1882 of nine papers dealing with the composition of certain resins and of the ethereal oil of the California bay tree, Oreodaphne Californica.

In 1878 Stillman married Emma Ruodolph, the daughter of a physician of Oakland. In 1882 his connection with the University of California came to an end when in order to better his financial condition he accepted an offer from industry. From 1882 to 1891 he served as chief chemist and superintendent of the Boston and American Sugar Refining Companies.

In 1885 he received the first Ph.D. from the College of Chemistry in recognition of his work while there. He was honored with the degree of LL.D. from Berkeley in 1916.

In 1891, he was recruited to the Stanford faculty by founding University President David Starr Jordan. He served as Professor of Chemistry 1891–1917, and as Executive Head of the department from 1904–1914.