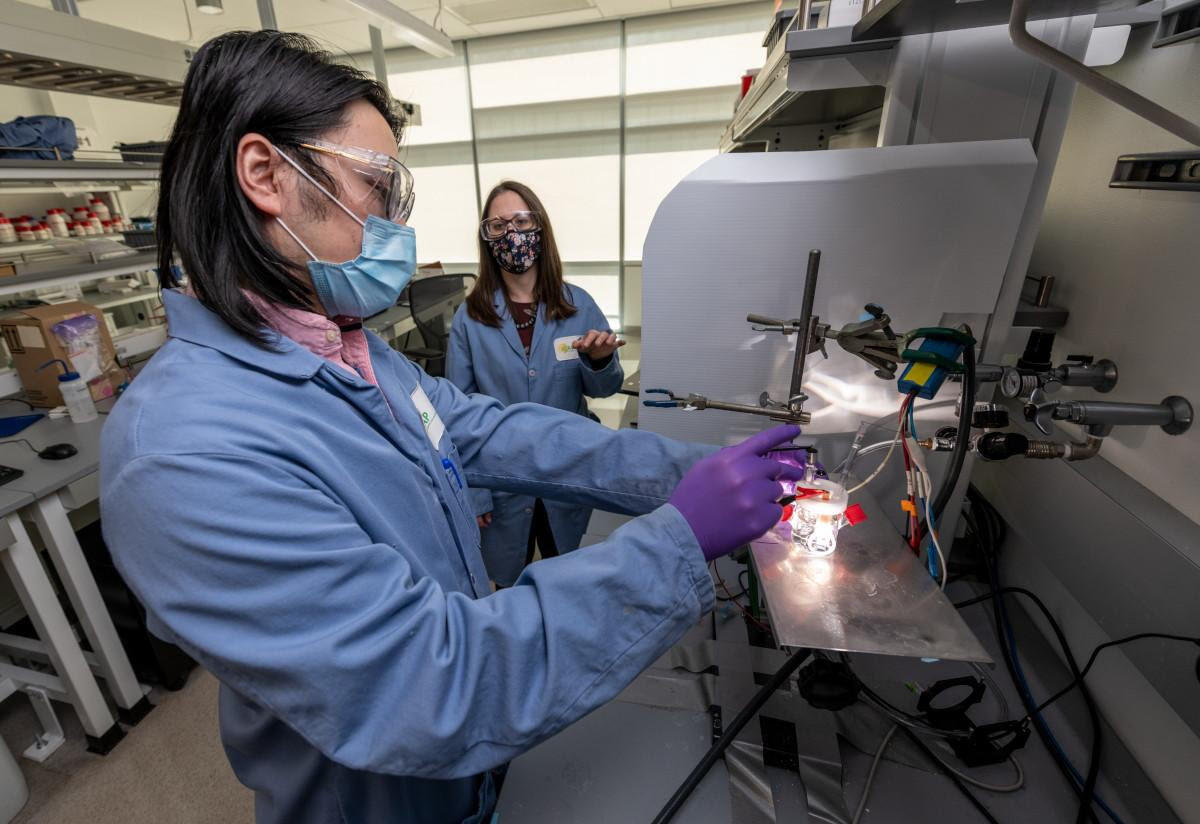 Guosong Zeng, a postdoctoral scholar, and Francesca Toma, a staff scientist, both in Berkeley Lab’s Chemical Sciences Division, test an artificial photosynthesis device made of gallium nitride. Toma and Zeng discovered that the device, rather than degrading over time, improves with use. (Credit: Thor Swift/Berkeley Lab)

Three years ago, scientists at the University of Michigan discovered an artificial photosynthesis device made of silicon and gallium nitride (Si/GaN) that harnesses sunlight into carbon-free hydrogen for fuel cells with twice the efficiency and stability of some previous technologies.

Now, scientists at the Department of Energy’s (DOE’s) Lawrence Berkeley National Laboratory (Berkeley Lab) – in collaboration with the University of Michigan and Lawrence Livermore National Laboratory (LLNL) – have uncovered a surprising, self-improving property in Si/GaN that contributes to the material’s ability to convert light and water into carbon-free hydrogen. Their findings, reported in the journal Nature Materials, could help radically accelerate the commercialization of artificial photosynthesis technologies and hydrogen fuel cells.

But silicon and gallium nitride are abundant and cheap materials that are widely used as semiconductors in everyday electronics such as LEDs (light-emitting diodes) and solar cells, said co-author Zetian Mi, a professor of electrical and computer engineering at the University of Michigan who invented Si/GaN artificial photosynthesis devices a decade ago. When Mi’s Si/GaN device achieved a record-breaking 3% solar-to-hydrogen efficiency, he wondered how such ordinary materials could perform so extraordinarily well in an exotic artificial photosynthesis device – so he turned to Toma for help.

Mi had learned of Toma’s expertise in advanced microscopy techniques for probing the nanoscale (billionths of a meter) properties of artificial photosynthesis materials through HydroGEN, a five-National Lab consortium supported by the DOE’s Hydrogen and Fuel Cell Technologies Office, and led by the National Renewable Energy Laboratory to facilitate collaborations between National Labs, academia, and industry for the development of advanced water-splitting materials. “These interactions of supporting industry and academia on advanced water-splitting materials with the capabilities of the National Labs are precisely why HydroGEN was formed – so that we can move the needle on clean hydrogen production technology,” said Adam Weber, Berkeley Lab’s Hydrogen and Fuel Cell Technologies Lab Program Manager and Co-Deputy Director of HydroGEN.

Toma and lead author Guosong Zeng, a postdoctoral scholar in Berkeley Lab’s Chemical Sciences Division, suspected that GaN might be playing a role in the device’s unusual potential for hydrogen production efficiency and stability.

To find out, Zeng carried out a photoconductive atomic force microscopy experiment at Toma’s lab to test how GaN photocathodes could efficiently convert absorbed photons into electrons, and then recruit those free electrons to split water into hydrogen, before the material started to degrade and become less stable and efficient.

Those experiments revealed that a one-nanometer layer mixed with gallium, nitrogen, and oxygen – or gallium oxynitride – had formed along some of the sidewalls. A chemical reaction had taken place, adding “active catalytic sites for hydrogen production reactions,” Toma said.

Density functional theory (DFT) simulations carried out by co-authors Tadashi Ogitsu and Tuan Anh Pham at LLNL confirmed their observations. “By calculating the change of distribution of chemical species at specific parts of the material’s surface, we successfully found a surface structure that correlates with the development of gallium oxynitride as a hydrogen evolution reaction site,” Ogitsu said. “We hope that our findings and approach – a tightly integrated theory-experiments collaboration enabled by the HydroGEN consortium – will be used to further improve the renewable hydrogen production technologies.”

Mi added: “We’ve been working on this material for over 10 years – we know it’s stable and efficient. But this collaboration helped to identify the fundamental mechanisms behind why it gets more robust and efficient instead of degrading. The findings from this work will help us build more efficient artificial photosynthesis devices at a lower cost.”

Looking ahead, Toma said that she and her team would like to test the Si/GaN photocathode in a water-splitting photoelectrochemical cell, and that Zeng will experiment with similar materials to get a better understanding of how nitrides contribute to stability in artificial photosynthesis devices – which is something they never thought would be possible. 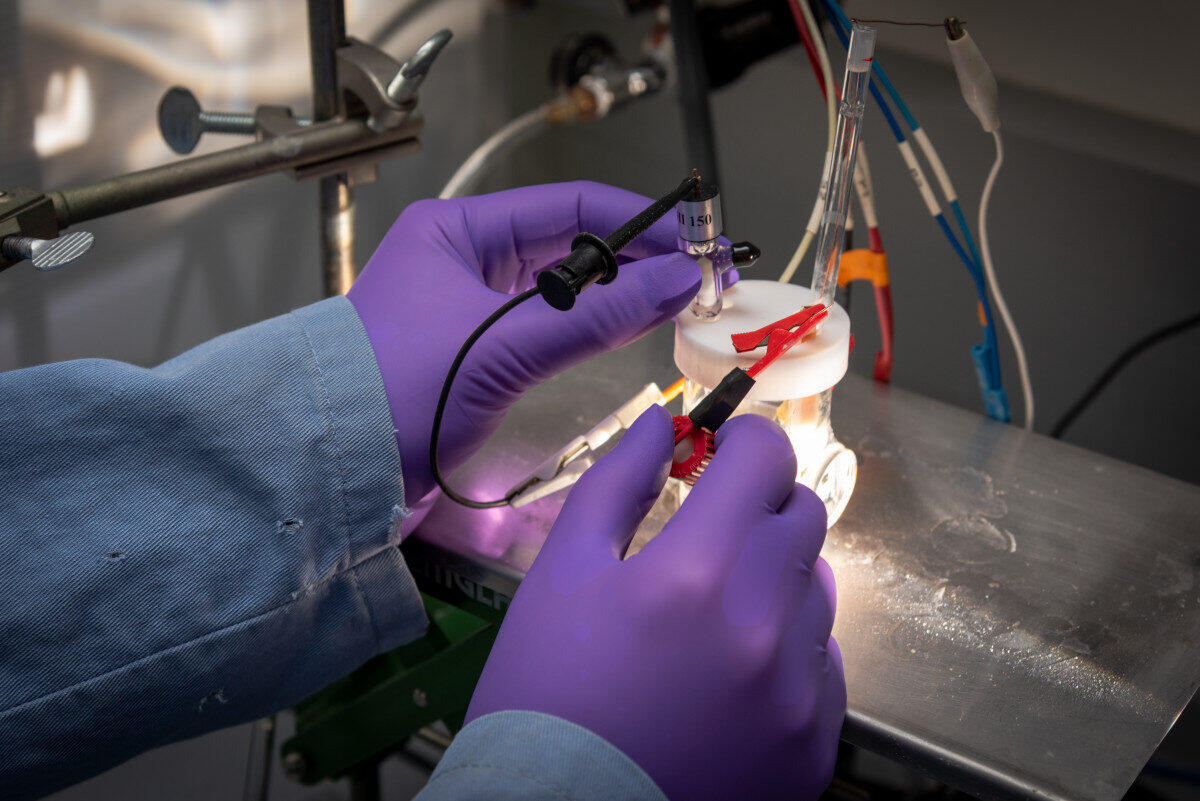 “It was totally surprising,” said Zeng. “It didn’t make sense – but Pham’s DFT calculations gave us the explanation we needed to validate our observations. Our findings will help us design even better artificial photosynthesis devices.”

“This was an unprecedented network of collaboration between National Labs and a research university,” said Toma. “The HydroGEN consortium brought us together – our work demonstrates how the National Labs’ team science approach can help solve big problems that affect the entire world.”

Co-authors on the paper include Guiji Liu, Jason Cooper, and Chengyu Song at Berkeley Lab; and Srinivas Vanka at the University of Michigan.

The Molecular Foundry is a DOE Office of Science user facility at Berkeley Lab.

This work was supported by the HydroGEN Advanced Water Splitting Materials Consortium, established as part of the Energy Materials Network under DOE’s Office of Energy Efficiency and Renewable Energy.