How DayGlo went from utility pigment to design world-darling 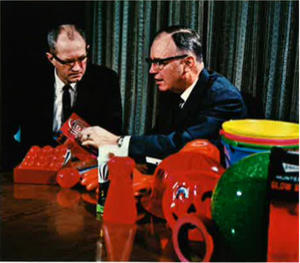 DayGlo was born in the dark.

It was 1933, and as lore has it, a young Bob Switzer (one of DayGlo’s inventors) had gotten a head injury while working his summer job at a H. J. Heinz Company tomato quality control laboratory in Berkeley, CA. With a fractured skull and optic nerve damage, Switzer had to spend months of recuperation in dimly-lit spaces.

To help Bob pass the time, his father built him a darkroom in the basement of the family’s pharmacy, where Bob and his brother Joe—a chemistry student at UC Berkeley, and an amateur magician—would experiment with chemicals taken from his family’s store. One day, the brothers combined Murine Eye Wash with rubbing alcohol, and noticed that under UV light the chemical soup began to glow with a fluorescent hue that they’d never seen before.

Intrigued by their discovery, Bob and Joe decided to combine the concoction with white shellac to thicken it, in turn creating a paint-like substance that could absorb the UV black light and reemit it as a glowing pigment. With that, the precursor to DayGlo and its neon empire was born.

Today DayGlo pigments color everything from traffic cones to tennis shoes, but back in the 1930s it was barely used at all. Though the Switzer brothers can lay claim to commercializing fluorescent pigments, they were far from the first people to discover the phenomenon. By the time Joe and Bob created their homemade paint, scientists had already spent years in the laboratory exploring the chemical makeup of glowing substances.

After the war, the Switzers developed a new kind of DayGlo pigment that was more stable than the fluorescent coating it had been using with the military.  According to a history of DayGlo by the American Chemical Society, this is how it worked: “Combining the fluorescent dyes with a new class of polymers and then milling the composition to an appropriate particle size produced material that behaved like traditional organic and inorganic pigments in printing techniques.”

Artists in the 1960s were embracing DayGlo’s brash new colors as a technological advancement that could extend painting into a more sensorial experience.

In other words, DayGlo paint was suddenly just like any other ink or paint. This opened a door for artists and designers who were curious about the neon pigments, and soon DayGlo could be found in newspaper and magazine advertisements and on packaging. In 1959 the detergent maker Tide debuted a new box that replaced its orange rings with a more striking fluorescent pigment. Sales surged, which sparked a tidal wave of companies embracing the bright hues.

Building a community of belonging
END_OF_DOCUMENT_TOKEN_TO_BE_REPLACED