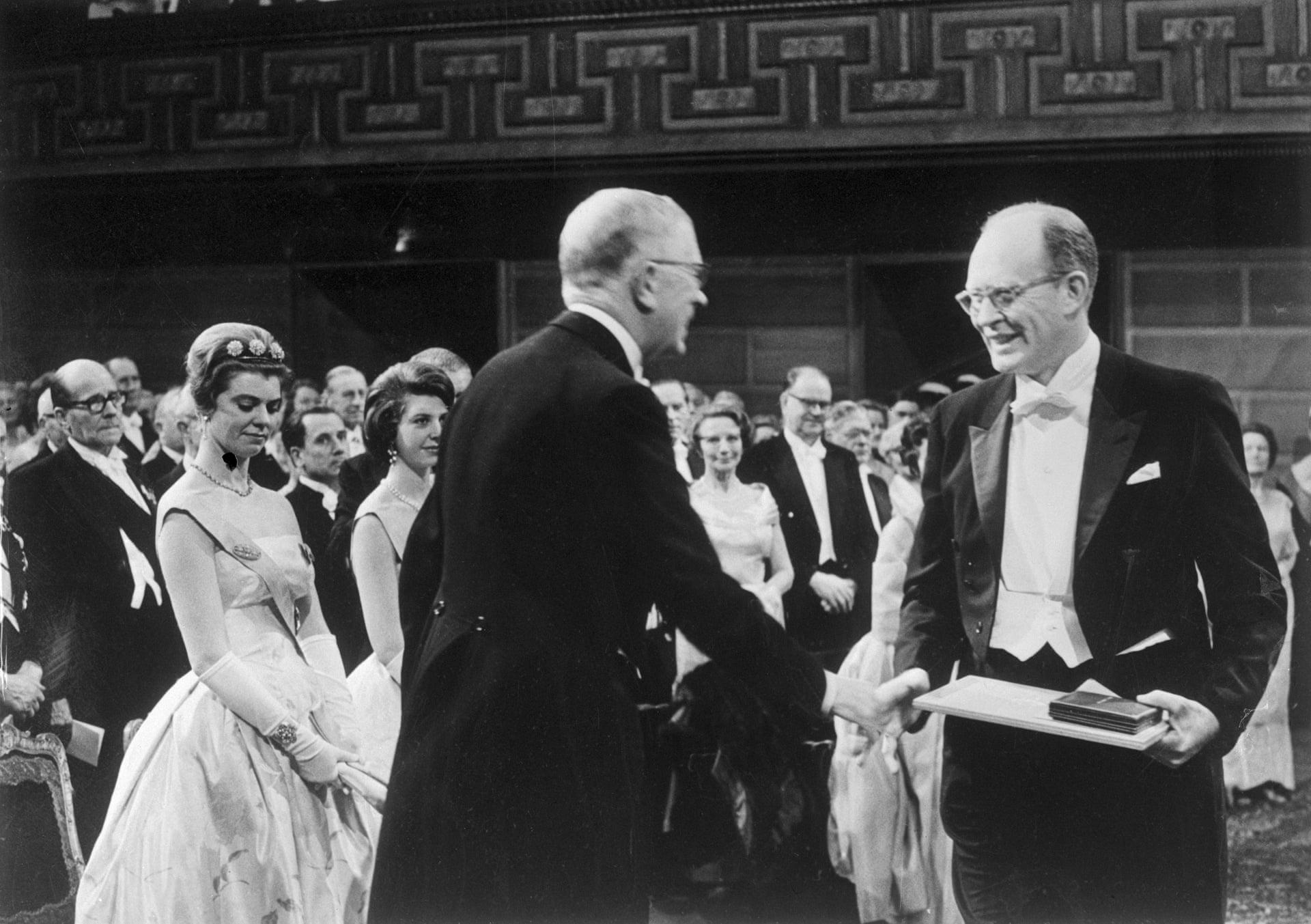 Photo: Willard Libby (B.S. '31, Chem; Ph.D. '33, Chem) receives the Nobel prize in chemistry, December 1960, "for his method to use carbon-14 for age determination in archaeology, geology, geophysics, and other branches of science." Image: Bettmann Archive

The discovery that carbon atoms act as a marker of time of death transformed everything from biochemistry to oceanography – but the breakthrough nearly didn’t happen.

Martin Kamen had worked for three days and three nights without sleep. The US chemist was finishing off a project in which he and colleague Sam Ruben (B.S. '35, Chem;  Ph.D. '38, Chem), had bombarded a piece of graphite with subatomic particles. The aim of their work was to create new forms of carbon, ones that might have practical uses.

Exhausted, Kamen staggered out of his laboratory at Berkeley in California, having finished off the project in the early hours of 27 February 1940. He desperately needed a break. Rumpled, red eyed and with a three-day growth of beard, he looked a mess.

And that was unfortunate. Berkeley police were then searching for an escaped convict who had just committed several murders. So when they saw the unkempt Kamen they promptly picked him up, bundled him into the back of their patrol car and interrogated him as a suspected killer.

Thus one of most revolutionary pieces of research undertaken in the past century was nearly terminated at birth when one of its lead scientists was accused of murder. It was only when witnesses made it clear that Kamen was not the man the police were after that he was released and allowed to go back to the University of California Radiation Laboratory to look at the lump of graphite that he and Ruben had been irradiating.

It did not take the pair long to realize they had produced a substance with remarkable properties, one that has since transformed a host of different scientific fields and continues to help scientists make major discoveries. By irradiating graphite, they had created carbon-14.

Scientists quickly realized the isotope must affect living beings today. Cosmic rays batter the upper atmosphere and send cascades of neutrons through the air, they calculated. These neutrons strike atoms of nitrogen, the main component of Earth’s atmosphere, and transform some into atoms of carbon-14. In turn, these atoms combine with oxygen to create radioactive carbon dioxide that is absorbed by plants, which are then eaten by animals. “Every living thing on Earth thus becomes radioactive, albeit slightly,” says John Marra, author of the newly published Hot Carbon: Carbon-14 and a Revolution in Science.

And it dawned on Willard Libby (B.S. '31, Chem; Ph.D. '33, Chem) of Chicago University that the radioactivity generated by carbon-14 could be exploited to tremendous advantage. A chemist who had worked on the Manhattan Project to build the first atom bomb, Libby realised that when an organism dies, it will stop absorbing carbon, including carbon-14, and its existing store of the latter will slowly decay. So, by measuring the radioactivity of a sample taken from the organism, its carbon-14 content could be estimated and the date of its time of death could be measured. The sciences of archaeology and palaeontology were about to be revolutionised.

Read the article in full at:  "‘Perhaps the most important isotope’: how carbon-14 revolutionised science," The Guardian.com, August 10, 2019