The histories hidden in the periodic table 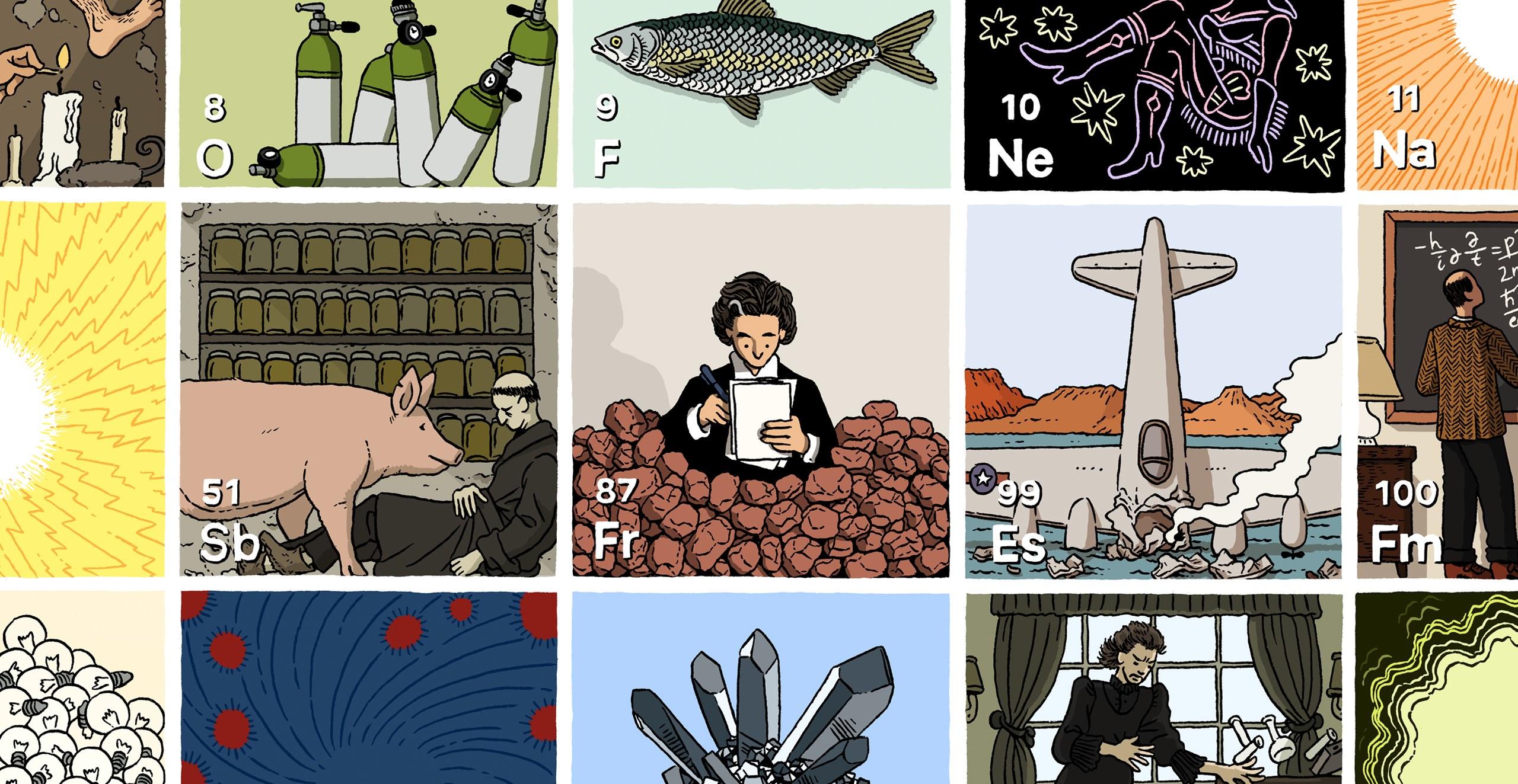 As element hunters have become element makers, the periodic table’s meaning has changed. It now describes what is possible, in addition to what merely exists. Illustration by Ilya Milstein

The story of the fifteenth element began in Hamburg, in 1669. The unsuccessful glassblower and alchemist Hennig Brandt was trying to find the philosopher’s stone, a mythical substance that could turn base metals into gold. Instead, he distilled something new. It was foamy and, depending on the preparation, yellow or black. He called it “cold fire,” because it glowed in the dark. Interested parties took a look; some felt that they were in the presence of a miracle. “If anyone had rubbed himself all over with it,” one observer noted, “his whole figure would have shone, as once did that of Moses when he came down from Mt. Sinai.” Robert Boyle, the father of modern chemistry, put some on his hand and noted how “mild and innocent” it seemed. Another scientist saw particles in it twinkling “like little stars.”

At first, no one could figure out what the Prometheus of Hamburg had stolen. After one of Brandt’s confidants provided a hint—the main ingredient was “somewhat that belong’d to the Body of Man”—Boyle deduced that he and his peers had been smearing themselves with processed urine. As the Cambridge chemist Peter Wothers explains in his new history of the elements, Antimony, Gold, and Jupiter’s Wolf (Oxford), Brandt’s recipe called for a ton of urine. It was left out in buckets long enough to attract maggots, then distilled in hot furnaces, creating a hundred and twenty grams of “cold fire.” Brandt believed that, if he could collect enough of this substance, he might be able to create the philosopher’s stone. In 1678, the Duke of Saxony asked him to collect a hundred tons of urine from a garrison of soldiers and render it into what Boyle and others soon started to call phosphorus—Latin for “light-bearer.”

The soapy phosphorus that Brandt cooked up was a curiosity. But, in England, Boyle began producing it in a purer, more solid form, which turned out to be highly flammable. Another scientist toying with Boyle’s phosphorus found that, “if the Privy Parts be therewith rubb’d, they will be inflamed and burning for a good while after.” Boyle, for his part, wondered whether it could be harnessed as a starter for gunpowder. (His assistant, the apothecary Ambrose Godfrey, set his head on fire and burned “two or three great holes in his breeches” while investigating the substance.) The phosphorus industry grew throughout the eighteenth century, in part because physicians wrongly believed that it had medicinal value. In the eighteen-hundreds, match producers found that wood splints tipped with phosphorus were less dangerous than their sulfur-coated predecessors; not long afterward, the discovery that electric furnaces could extract phosphorus from ore at a large scale led to the development of explosives. In the Second World War, in what Wothers calls “a tragic twist of fate,” Hamburg, Brandt’s home town, was destroyed by Allied bombers dropping phosphorus munitions.

Wothers finds many such twists in the stories hidden behind the squares of the periodic table. Antimony (element No. 51) is a lustrous mineral; four thousand years ago, people carved vases out of it, and it appears in cosmetic regimes described in the Old Testament. According to an account given by the seventeenth-century apothecary and alchemist Pierre Pomet (offered up by Wothers as possibly apocryphal), antimony got its name from the story of a German monk who fed it to his fellow-brethren. The monk had given some to a few pigs, who vomited at first but then grew healthy and fat. Unfortunately, every monk who ingested it died. “This therefore was the reason of this Mineral being call’d Antimony,” Pomet wrote, “as being destructive of the Monks.” (In a less fatal episode, a nineteenth-century doctor and his friends consumed fifteen milligrams of tellurium each: they had garlic breath for eight months.)