Hydrogen peroxide is an important commodity chemical with a growing demand in many areas, including the electronics industry, wastewater treatment, and paper recycling.

Graphic: The production of hydrogen peroxide (H2O2) from oxygen (O2) was efficiently catalyzed by graphene oxide, a form of graphene characterized by various oxygen defects that act as centers for catalytic activity. Depicted are two types of defects: one in which an oxygen atom bridges two carbon atoms above the graphene plane, and one where oxygen atoms replace carbon atoms within the graphene plane.

It whitens, brightens, and disinfects!

Hydrogen peroxide (H2O2) is a common household chemical, well known for its effectiveness at whitening and disinfecting. It's also a valuable commodity chemical used to etch circuit boards, treat wastewater, and bleach paper and pulp—a market expected to grow as demand for recycled paper products increases.

Compared to chlorine-based bleaches, hydrogen peroxide is more environmentally benign: the only degradation product of its use is water. However, it's currently produced through a multistep chemical reaction that consumes significant amounts of energy, generates substantial waste, and requires a catalyst of palladium—a rare and expensive metal. Furthermore, the transport and storage of bulk hydrogen peroxide can be hazardous, making local, on-demand production highly desirable.

Scientists seek a way to generate hydrogen peroxide electrochemically—by a much simpler process called the oxygen reduction reaction (ORR). This reaction takes oxygen from the air and combines it with water and two electrons to produce H2O2. If this reaction could be efficiently catalyzed, it could enable the disinfection of water at remote locations, or during disaster recovery, using hydrogen peroxide made from local air and water. For this work, the researchers focused on hydrogen peroxide synthesis in alkaline environments, where the reaction bath can be used directly, such as for bleaching or the treatment of acidic waste streams.

To realize the advantages of electrochemical production, however, electrodes that catalyze the ORR selectively, efficiently, and cost effectively need to be developed. Carbon, for example, is abundant and inexpensive. In graphene oxide form, it's characterized by oxygen defects that act as catalytic centers. Because these oxygen defects are removed by "aggressive" treatment during synthesis (exposure to oxidizing agents, sulfuric acid, heat, and pressure), the researchers used a "mild" reduction process to preserve as many as possible. The challenge then was to discover which defects resulted in the highest catalytic activity and selectivity.

Synchrotron-based near-edge x-ray absorption fine-structure (NEXAFS) spectroscopy at ALS Beamline 8.0.1 was used to explore how annealing the samples influenced defect-site composition. Previous studies had shown that annealing substantially reduces oxygen content. The energy resolution of the beamline at the oxygen K-edge and its high photon flux are well suited to the characterization of materials with relatively low oxygen content. Surprisingly, the strongest oxygen signal came from the sample annealed at the highest temperature. This peak signified that certain types of oxygen defects (“ring ethers”), located near the edges of the graphene oxide plane, were primarily responsible for the observed catalytic activity. Data from the other spectroscopic techniques supported this conclusion as well. 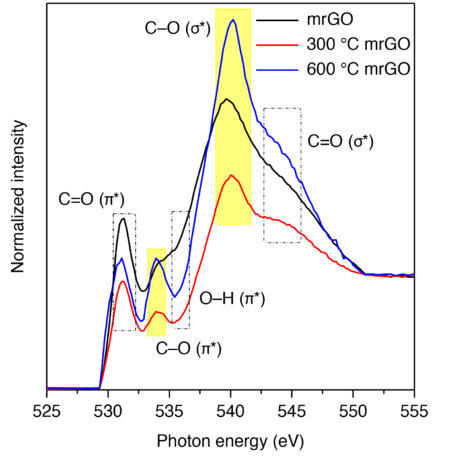 Graphic: High-resolution oxygen K-edge NEXAFS spectra of unannealed and annealed mrGO. A sharp and intense peak at 540.4 eV arose in mrGO annealed at 600 °C, even though it had low oxygen content compared with unannealed mrGO and mrGO annealed at 300 °C. The peak can be ascribed to transitions of O 1s core-level electrons to antibonding σ* states from C–O bonding in ring-ether defects at the edges of the graphene oxide plane.