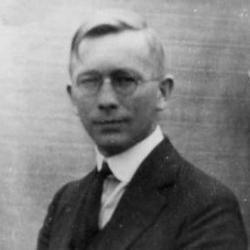 Gerhard Krohn Rollefson was associated with the University of California at Berkeley as a graduate student and as a member of the staff of the College of Chemistry. In the thirty-five years of this association he established himself as an authority in the field of photochemistry, became widely recognized for a sound judgment covering the whole of physical chemistry, and served the University well through his teaching at all levels of instruction and friendly collaboration and counseling.

Professor Rollefson was born in Grand Forks, North Dakota, January 12, 1900, one of three sons of Carl J. and Marie Krohn Rollefson. His collegiate training was at the University of Wisconsin, where he received the A.B. degree in 1920 and the A.M. in 1921. This period was aided by an undergraduate assistantship in physics and a corresponding position in chemistry during his graduate year, and interrupted by a year as a high school principal in Wisconsin, in 1917-1918. The timing of the latter reflects either precociousness in the student or the needs of an advancing frontier, or both.

In 1921 a teaching fellowship was offered to Professor Rollefson at Berkeley, and his worth was immediately recognized through appointment the following year as a du Pont Fellow, in those days a relatively rare aid to graduate study. After completion of his doctoral thesis in 1923 in the field of X-ray spectroscopy, he joined the newly developing College of Chemistry, under the leadership of Gilbert N. Lewis, as an Instructor. Except for a year of study in 1925-1926 in Göttingen, Germany, with Professors J. Franck and H. Kuhn as a Guggenheim Memorial Foundation Fellow, he remained at Berkeley. In 1940 he became Professor of Chemistry.

In 1928 Nellie Marie Fogarty, of Altimar, California, and Gerhard Rollefson were married. Both Professor and Mrs. Rollefson were active in various phases of University and community life. Her death, preceding his by a few months, contributed to the strain which led to his second and fatal heart attack on November 15, 1955.

Professor Rollefson was an unusually productive scientist, having published more than one hundred papers dealing with fundamental aspects of physical chemistry. His interests ranged from X-ray studies to interionic effects on reaction rates in solution, but with special emphasis on photochemistry. In the latter field he published, in 1939, a definitive work with Dr. M. Burton which added to his recognition as an international authority on the processes underlying photochemistry. His study of the quenching of fluorescence has contributed to our understanding of the nature of activated molecules, their lifetimes and the modes of energy transfer in solution. He was one of the first to investigate (1934) the isotope effect on reaction rates and currently had under way investigations of the chemical effects of neutron bombardment and of nuclear radiation. He was particularly effective in devising experiments to clarify the primary processes which underlie chemical change and thereby resolve problems of basic interest.

In addition to his research, Professor Rollefson was a stimulating teacher at the undergraduate level. In this he served a broader field through his textbook Physical Chemistry, written in collaboration with the late Professor E. D. Eastman. As editor of the Annual Reviews of Physical Chemistry from the date of its first publication, he made his judgment of what is noteworthy and sound in current research available to the world at large. As a consultant at the Los Alamos Scientific Laboratory, he was influential for many years in that important research center.

The citation of professional and other associations serves but to emphasize both scientific virility and an essential congeniality in Professor Rollefson. His papers appeared in the Journal of the American Chemical Society, the Physical Review, the Journal of Chemical Physics, the Zeitschrift fur Physik, Transactions of the Faraday Society, and Science. Besides the American Chemical Society, he was associated with and active in the American Association for the Advancement of Science, Sigma Xi, Phi Beta Kappa, and Alpha Chi Sigma.

As an accomplished cellist, he was a member of the University Symphony Orchestra for many years and contributed this talent in trio ensemble on numerous occasions.

Of unfailing good humor and calm judgment, Professor Rollefson will long be remembered by the large number in the University community he has served as adviser, teacher, and colleague.