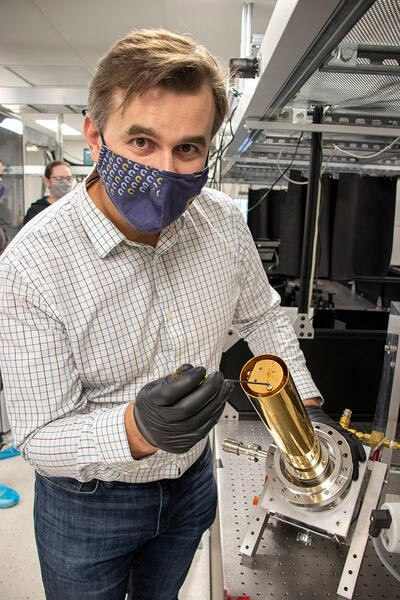 The last decade has been marked by a series of remarkable discoveries identifying how the universe is composed. Currently it is understood that the mysterious substance dark matter makes up 85% of the matter in the universe. This observable matter consists of ionized particles. Thus, a profound understanding of ionized matter and its interaction with light could lead to a deeper understanding of the relationships at play that formed the universe. While ionized matter, or plasma, is relatively easy to generate in the lab, studying it is extremely challenging as methods that can capture ionization states and density are virtually non-existent.

In a new paper published in Light Science & Application, a team of scientists, led by Assistant Professor Michael Zuerch from the University of California Berkeley, Department of Chemistry, and co-workers have succeeded in directly observing the formation and interaction of highly ionized krypton plasma using femtosecond coherent ultraviolet light and a novel four-dimensional model.

In their work, the researchers employ a laser-plasma amplifier, that uses eight-fold ionized krypton ions as laser medium. Then they launch a coherent extreme ultraviolet probe pulse into this plasma that picks up signatures of the plasma conditions as it propagates through the laser-generated plasma column.

“Using an extreme ultraviolet probe pulse with a wavelength short enough so that the plasma becomes transparent to interrogate the formed plasma is key,” explains Zuerch.

This extreme ultraviolet probe pulse is then analyzed by diffracting it off a well-characterized nanoscale target. This method, known as coherent diffraction imaging, allows for measurement of the properties of the probe pulse carrying information about the plasma with very high resolution.

“Surprisingly, we found a non-trivial spatial modulation pattern that is unexpected in a waveguide geometry. Using an adapted ab initio theory modelling the plasma-light interaction in four dimensions across multiple scales we can find excellent agreement with our experimental data. This has allowed us to ascribe the observed signal to a strongly nonlinear behavior in laser-plasma interaction generating the highly-ionized krypton plasma,” elaborates Zuerch.

The experimental approach, that can be easily adopted to other relevant scenarios, validates the advanced ab initio models used to simulate the laser-plasma interaction and more generally the formation of highly ionized plasma. An important ramification of the findings shows that you cannot create arbitrarily ionized plasmas using optical techniques. The developed model will allow for predicting achievable conditions accurately and gives hope that very defined plasma conditions can be created by appropriate laser beam shaping.

Zuerch summarized the outlook of the work, “Beyond a more profound understanding of laser-plasma interactions, our findings have impacts, for example, on the upscaling of plasma-based X-ray light sources or plasma-based fusion experiments.” 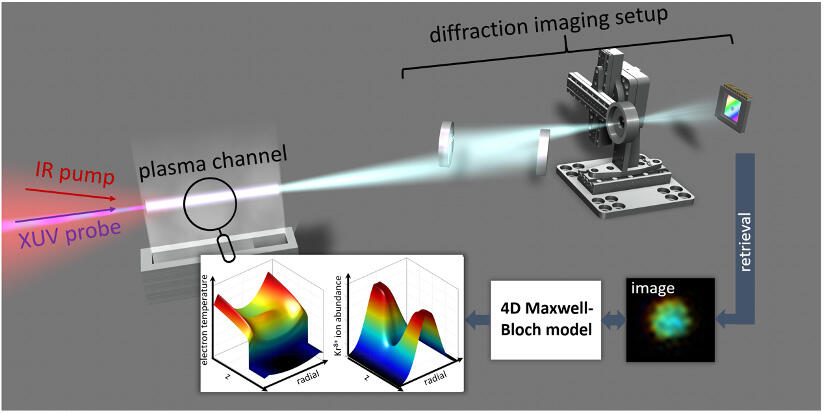 Illustration: imaging and modeling nonlinear ionization dynamics in a hot dense plasma. A strong infrared (IR) laser pulse creates a highly ionized plasma channel in a krypton target. An extreme ultraviolet (XUV) probe or seed pulse is sent through the plasma channel. A diffraction imaging setup using a nanoscale target enables taking a high-resolution image of the XUV beam. A four-dimensional Maxwell-Bloch model numerically calculates the laser-matter interaction in the plasma channel and allows calculating the spatially and time-dependent electron temperature as well as ion abundance in the plasma channel. Courtesy Michael Zuerch.

Funding for this project was provided by the following institutions: