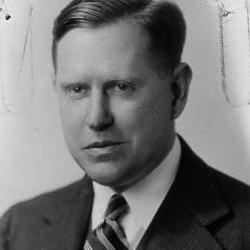 Ermon Dwight Eastman, Professor of Chemistry, was born in Marysville, California, November 30, 1891. He attended the Marysville schools through the lower grades and graduated from high school after a final year in the Fremont High School, Oakland. He entered the College of Chemistry of the University of California where he received the B.S. degree in 1913, one year after the reorganization of the Department of Chemistry under the late Gilbert N. Lewis. From 1912 to 1917 he served as a teaching assistant in chemistry and during this interval engaged in graduate work. The M.S. degree was granted him in 1914 and he received the Ph.D. degree in 1917, after which he was appointed an instructor in chemistry. His recognized ability brought him rapid advancement through the intervening academic ranks to that of professor in 1931.

Professor Eastman was awarded a Guggenheim Memorial Fellowship in 1932-1933 as a result of which he spent a year in Munich studying the structure and properties of atomic nuclei. At the time of his sudden death from a heart attack, May 19, 1945, he was codirector of an important research program for the Manhattan Engineering District on the chemistry of plutonium.

He is survived by his widow, Ann Gunn Eastman, and two daughters, Jeanne and Elizabeth.

The research activities of Professor Eastman led to the publication of thirty-eight scientific papers, of which he was either sole or joint author. In 1942, with G. K. Rollefson, he published a book on physical chemistry. Most of his contributions dealt with various problems in chemical thermodynamics. By experimental data as well as theoretical considerations, he aided in the exact statement of the Third Law of Thermodynamics. He measured the specific heats at low temperatures of sodium, potassium, calcium, magnesium, lead sulfide, and hydrogen. The studies of hydrogen played a prominent part in the development of the quantum theoretical treatment of diatomic molecules and presented the first definite evidence for the two kinds of hydrogen molecule, “ortho” and “para.” He dealt, in several important papers, with the role of free electrons in determining the heat capacity of metals and thereby contributed to a clearer understanding of the way by which metals conduct electricity as well as to a more definite concept of electricity itself. He called attention for the first time to the entropy of transfer in electrolytic cells and his work on thermal cells is noteworthy as providing one of the few means available for determining a reasonably accurate value for any property of a single ion in solution. He determined the equilibrium constants for several important reactions, including those involved in the reduction of iron oxides by carbon and hydrogen; these studies are basic to the technology of iron production. He studied the X-ray diffraction patterns of solid and liquid benzene in the course of his investigation on the structure of matter. The power of his scientific imagination is indicated not only by the variety of problems which he attacked but also by their significance. His work has led to a more clear conception of the forces acting upon atoms and molecules and to a more precise understanding of the nature of chemical transformations.

He was an effective teacher, spending his efforts with equal generosity upon graduate students, advanced undergraduates, and freshmen. His expositions were models of organization and clarity. He was beloved by his colleagues in the department for his kindly spirit, his wisdom, his tolerance, and his generous sharing of the burdens of departmental work. His dignified bearing, subtle humor, and friendliness caused him to be sought as a companion.

The rest of the University came to recognize these same qualities and called upon him to serve upon various important committees, including, finally, the most important of all, the Committee on Budget and Interdepartmental Relations. His place will be filled in the committees and at the teacher's desk, but not in the hearts of those who lived and worked with him during the years.