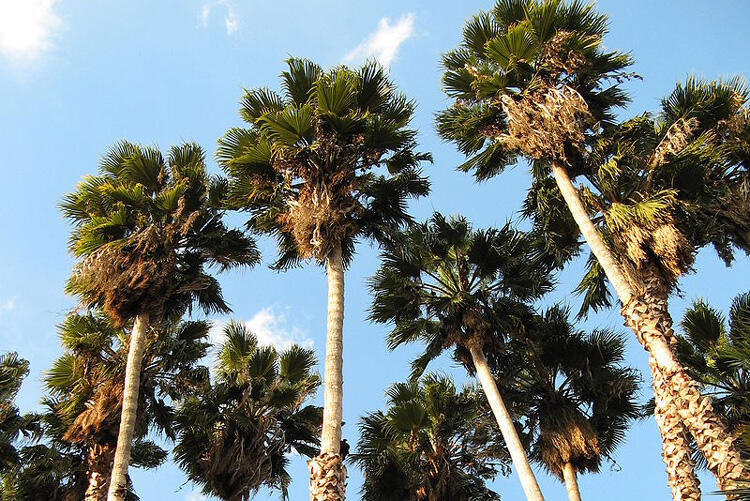 Mexican fan palms, native to the deserts of northwestern Mexico, are a widely-planted ornamental throughout the Los Angeles basin and are contributing substantially to the organic aerosol pollution in the area, according to a UC Berkeley study. (Photo courtesy of Wikimedia Commons)

California’s restrictions on vehicle emissions have been so effective that in at least one urban area, Los Angeles, the most concerning source of dangerous aerosol pollution may well be trees and other green plants, according to a new study by University of California, Berkeley, chemists.

Aerosols — particles of hydrocarbons referred to as PM2.5 because they are smaller than 2.5 microns in diameter and easily lodge in the lungs — are proven to cause cardiovascular and respiratory problems.

As a result of strict vehicle emissions laws, organic aerosol levels have been significantly reduced throughout the United States, but the drop has been particularly dramatic in Los Angeles, which started out at a higher level.

Based on pollution measurements over the past 20 years, the UC Berkeley scientists found that concentrations of PM2.5 in the Los Angeles basin in 2012 were half what they were in 1999. As a result, from 2016 to 2018, there were almost no PM2.5 violations in the area when temperatures were low, below 68 degrees Fahrenheit. But at warmer temperatures, aerosol concentrations rose — over the same time period, 70% to 80% of days over 100 F exceeded the National Ambient Air Quality Standard (NAAQS) threshold.

“The positive news is that, where we did understand the source and we took action, that action has been incredibly effective,” said Ronald Cohen, an atmospheric chemist and UC Berkeley professor of chemistry. “Twenty years ago, just about every day in LA was in violation of a health-based standard. And now it is only the hot days.”

As vehicle organic chemicals — compounds of carcinogens such as benzene and toluene —dropped, air quality experts focused on other potential sources of aerosols in those cities with unhealthful levels. Many researchers believe that personal care and household cleaning products — some seemingly as benign as the citrus scent limonene — may be the culprit. Given the temperature dependence of aerosol levels in Los Angeles, Cohen doubts that.

“There is a growing consensus that, as cars became unimportant, household chemicals are dominating the source of organics to the atmosphere and, therefore, dominating the source of aerosols,” he said. “I am saying that I don’t understand how aerosols from these chemicals could be temperature-dependent, and, therefore, I think it is likely something else. And trees are a good candidate.”

Plants are known to release more organic chemicals as the temperature rises and in many forested areas trees are the source of organic chemicals that combine with human-produced nitrogen oxides to form aerosol. President Ronald Reagan was partially correct when he infamously stated in 1981 that, “Trees cause more pollution than automobiles do.” At the time, scientists were learning about the role of forests surrounding Atlanta in causing that city’s air pollution.

In 2018, organic aerosols made up about 23% of the aerosol pollutants in Los Angeles (blue on pie chart), a large portion of which is due to chemicals emitted by plants. The right chart shows how aerosol concentrations in LA have declined over time, leveling out around 2012. (UC Berkeley graphics by Clara Nussbaumer and Ronald Cohen)

They estimated that, on average, 25% of the aerosols in the Los Angeles basin come from vegetation, which includes an estimated 18 million or more trees.

Plant derived aerosols are likely made of the chemical isoprene — the building block of rubber or plant chemicals such as terpenes, which consist of two or more isoprene building blocks combined to form a more complex molecule. Cohen says that PM2.5 aerosols can be thought of “as little tiny beads of candle wax,” with plant-derived aerosols composed of many molecules of isoprene and terpenes, which are found in pine tree resins.

“I am not suggesting that we get rid of plants, but I want people who are thinking about large-scale planting to pick the right trees,” he said. “They should pick low-emitting trees instead of high-emitting trees.”

The research was described this month in the journal Environmental Science & Technology.

How does global warming affect pollutants?

Cohen, who has studied the temperature dependence of urban ozone levels for insight into the impact climate change will have on pollutants, decided two years ago to investigate the temperature dependence of ozone and aerosol pollution in five counties in the Los Angeles basin: Los Angeles, San Bernardino, Riverside, Orange and Ventura. He and Nussbaumer looked at data from 22 measurement sites across the basin — eight in LA County, two in Orange County, five in Riverside County, four in San Bernardino County, and three in Ventura County — to study aerosols, and at four sites — three in LA, one in San Bernardino — to study ozone. 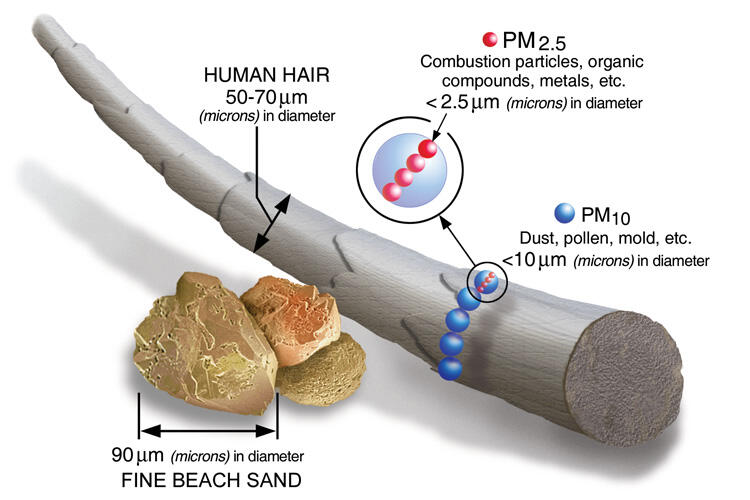 Particulate matter, or PM, is a mixture of solid particles and liquid droplets found in the air. Some, like dust, dirt, soot, or smoke, can be seen with the naked eye, while others are too small to see without a microscope. PM2.5 are fine inhalable particles with diameters that are generally 2.5 microns (micrometers) or smaller. The average human hair is about 70 microns in diameter. (Graphic courtesy of EPA)

Using a simple atmospheric model, they concluded that both regulated chemicals from vehicle exhaust and cooking — primary organic aerosols such as benzene, toluene, ethylbenzene and xylene — and isoprene from plants were precursors of the majority of the organic aerosols observed. Their model suggests that about a quarter of the SOA in the LA Basin are formed by isoprene or other very similar compounds, and that these represent most of the temperature-dependent increase. While there is evidence that some temperature-dependent VOCs have been controlled over time, such as those from evaporation of gasoline, isoprene is not one of them.

Cohen noted that as electric car use increases, the importance of organic aerosols from vegetation will become more dominant, requiring mitigation measures to keep levels within regulatory limits during heat waves.

“Cars are also contributing to ozone, and in the LA basin the ozone level is also high, at high temperatures and for the same reason: There are more organic molecules to drive the chemistry when it is hot,” Cohen said. “We want some strategy for thinking about which plants might emit fewer hydrocarbons as it gets hot or what other emissions we could control that prevent the formation of aerosols.”

Cohen hopes to look at data from other urban areas, including the San Francisco Bay Area, to see if the temperature-dependent aerosols now dominate, and whether vegetation is the culprit.

The study was funded in part by a grant (NA18OAR4310117) from the National Oceanic and Atmospheric Administration (NOAA). Cohen and Allen Goldstein, a UC Berkeley professor of environmental science, policy and management and of civil and environmental engineering, have also partnered with NOAA scientists and the state and local air quality agencies on an experiment to observe emissions in Los Angeles at different temperatures. Combining these different observing strategies in the LA Basin, Cohen hopes, “will lead to better ideas for reducing high ozone and aerosol events in the basin, ones that can then be used as a guide in other major cities suffering from poor air quality.”

Cohen also maintains a high-density network of 75 pollution monitoring stations around the Bay Area called BEACO2N. Cohen just started a collaboration with William Berelson at the University of Southern California and the Los Angeles Unified School District to deploy BEACO2N nodes in that area of Southern California.

Env Sci Tech: "Impact of OA on the Temperature Dependence of PM 2.5 in the Los Angeles Basin"