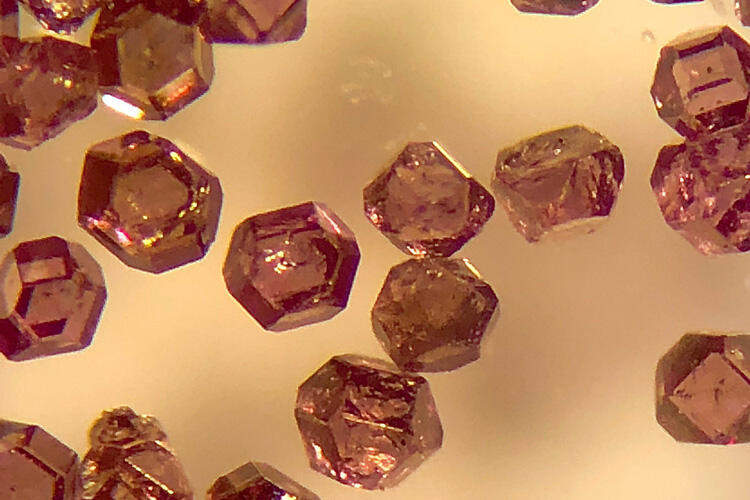 The microdiamonds used as biological tracers are about 200 microns across, less than one-hundredth of an inch. They fluoresce red but can also be hyperpolarized, allowing them to be detected both optically — by fluorescence microscopy — and by radio-frequency NMR imaging, boosting the power of both techniques. (Photo courtesy of Ashok Ajoy)

When doctors or scientists want to peer into living tissue, there’s always a trade-off between how deep they can probe and how clear a picture they can get.

With light microscopes, researchers can see submicron-resolution structures inside cells or tissue, but only as deep as the millimeter or so that light can penetrate without scattering. Magnetic resonance imaging (MRI) uses radio frequencies that can reach everywhere in the body, but the technique provides low resolution — about a millimeter, or 1,000 times worse than light.

A University of California, Berkeley, researcher has now shown that microscopic diamond tracers can provide information via MRI and optical fluorescence simultaneously, potentially allowing scientists to get high-quality images up to a centimeter below the surface of tissue, 10 times deeper than light alone.

By using two modes of observation, the technique also could allow faster imaging.

The technique would be useful primarily for studying cells and tissue outside the body, probing blood or other fluids for chemical markers of disease, or for physiological studies in animals.

“This is perhaps the first demonstration that the same object can be imaged in optics and hyperpolarized MRI simultaneously,” said Ashok Ajoy, UC Berkeley assistant professor of chemistry. “There is a lot of information you can get in combination, because the two modes are better than the sum of their parts. This opens up many possibilities, where you can accelerate the imaging of these diamond tracers in a medium by several orders of magnitude.”

The technique, which Ajoy and his colleagues report this week in the journal Proceedings of the National Academy of Sciences, utilizes a relatively new type of biological tracer: microdiamonds that have had some of their carbon atoms kicked out and replaced by nitrogen, leaving behind empty spots in the crystal — nitrogen vacancies — that fluoresce when hit by laser light.

Ajoy exploits an isotope of carbon — carbon-13 (C-13) – that occurs naturally in the diamond particles at about 1% concentration, but also could be enriched further by replacing many of the dominant carbon atoms, carbon-12. Carbon-13 nuclei are more readily aligned, or polarized, by nearby spin-polarized vacancy centers, which become polarized at the same time they fluoresce after being illuminated with a laser. The polarized C-13 nuclei yield a stronger signal for nuclear magnetic resonance (NMR) — the technique at the heart of MRI. 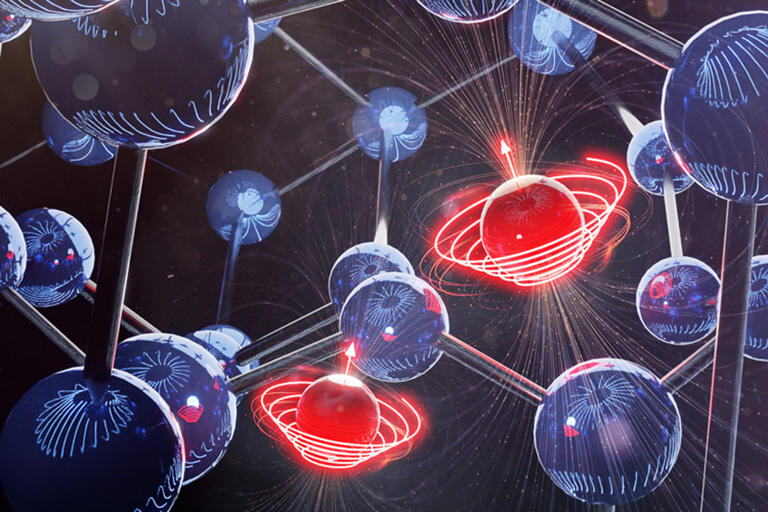 The crystal lattice of a microdiamond contains gaps — nitrogen vacancies — that can be polarized (red spinning balls) and made to emit red light when illuminated by a laser. The polarized centers then hyperpolarize nearby carbon-13 atoms (blue balls), allowing them to be detected by NMR imaging. This allows the tracers to be imaged both by optical fluorescence microscopy and NMR, providing higher resolution pictures deeper inside tissue. (UC Berkeley graphic by Xudong Lv and Mustafa Kamran)

As a result, these hyperpolarized diamonds can be detected both optically — because of the fluorescent nitrogen vacancy centers — and at radio frequencies, because of the spin-polarized carbon-13. This allows simultaneous imaging by two of the best techniques available, with particular benefit when looking deep inside tissues that scatter visible light.

“Optical imaging suffers greatly when you go in deep tissue. Even beyond 1 millimeter, you get a lot of optical scattering. This is a major problem,” Ajoy said. “The advantage here is that the imaging can be done in radio frequencies and optical light using the same diamond tracer. The same version of MRI that you use for imaging inside people can be used for imaging these diamond particles, even when the optical fluorescence signature is completely scattered out.”

Ajoy focuses on improving NMR — a very precise way of identifying molecules — and its medical imaging counterpart, MRI, in hopes of lowering the cost and reducing the size of the machines. One limitation of NMR and MRI is that large, powerful and costly magnets are needed to align or polarize the nuclear spins of molecules inside samples or the body so that they can be detected by pulses of radio waves. But humans can’t withstand the very high magnetic fields needed to get lots of spins polarized at once, which would provide better images. 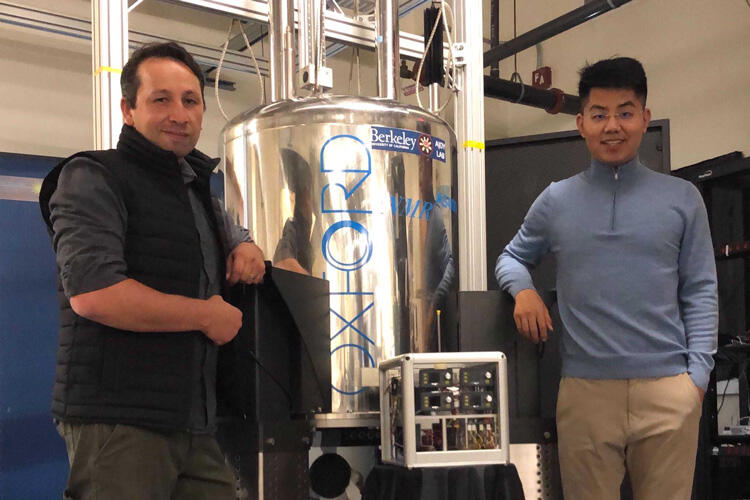 Emanuel Druga and Xudong Lv with a prototype “hyperpolarizer” for diamond particles (on table). They are standing next to a 9-tesla NMR machine. (UC Berkeley photo by Ashok Ajoy)

One way to overcome this is to tweak the nuclear spins of the atoms you want to detect so that more of them are aligned in the same direction, instead of randomly. With more spins aligned, called hyperpolarization, the signal detected by radio is stronger, and less powerful magnets can be used.

In his latest experiments, Ajoy employed a magnetic field equivalent to that of a cheap refrigerator magnet and an inexpensive green laser to hyperpolarize the carbon-13 atoms in the crystal lattice of the microdiamonds.

“It turns out that if you shine light on these particles, you can align their spins to a very, very high degree — about three to four orders of magnitude higher than the alignment of spins in an MRI machine,” Ajoy said. “Compared to conventional hospital MRIs, which use a magnetic field of 1.5 teslas, the carbons are polarized effectively like they were in a 1,000-tesla magnetic field.”

In the researchers’ experiment, diamond particles arranged in a ring were imaged both optically and with magnetic resonance imaging (MRI). (Image courtesy of Ashok Ajoy)

The diamond tracers also are inexpensive and relatively easy to work with, Ajoy said. Together, these new developments could, in the future, allow for an inexpensive NMR imaging machine on every chemist’s benchtop. Today, only large hospitals can afford the million-dollar price tag for MRIs. He currently is working on other techniques to improve NMR and MRI, including using hyperpolarized diamond particles to hyperpolarize other molecules.