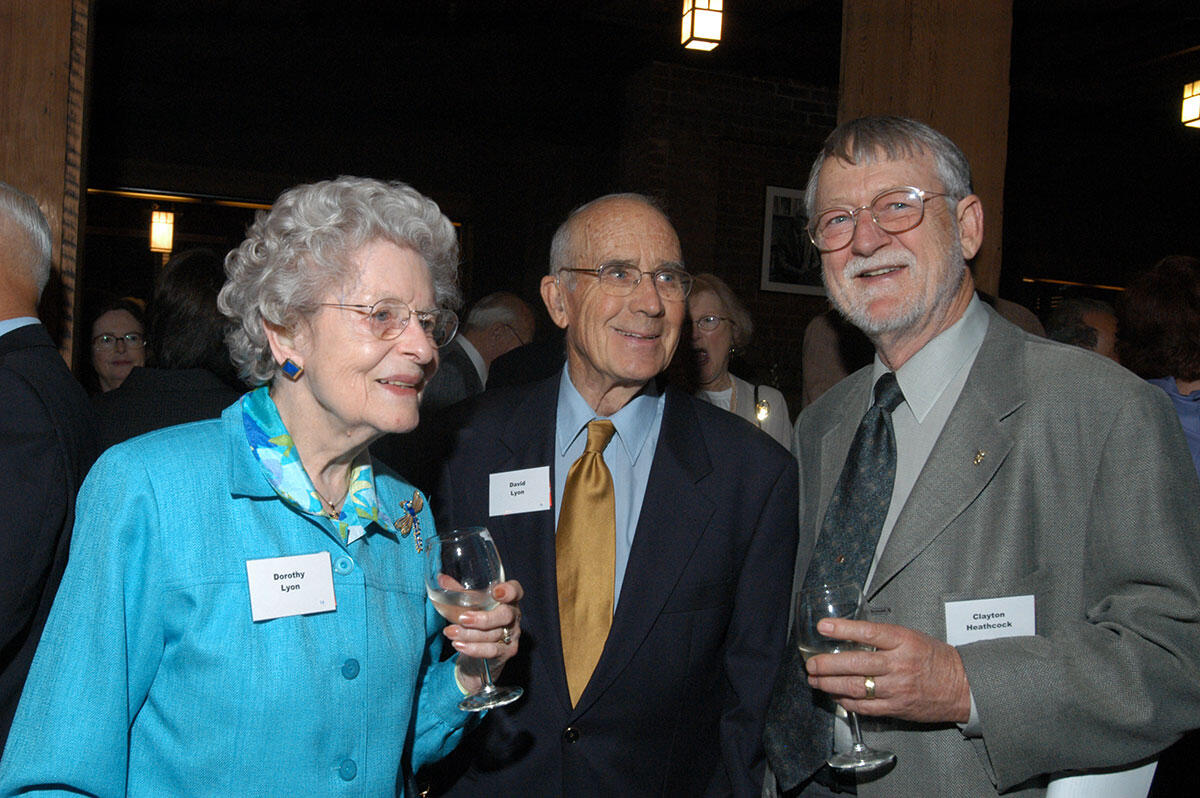 David Nathaniel Lyon died December 10, 2008. He was living with his second wife, Dorothy, in a Santa Rosa retirement center. He was 89. Dave, as he was known to his friends and colleagues in the Low Temperature Laboratory and the College of Chemistry, came to the University of California, Berkeley, as a graduate student in 1942 and made important contributions to research and teaching until his retirement from the faculty in 1982.

David N. Lyon was born April 15, 1919, in Altoona, Kansas. When he was very young, the family moved to El Dorado Springs, Missouri, where he attended the public high school. He went to the University of Missouri and majored in chemistry. He graduated, Phi Beta Kappa, with an A.B. in 1940 and went on to receive an M.A. in chemistry in 1942. In that year he spent a short time as a research assistant at the Manhattan District Engineering Project at Columbia University, working on the thermodynamic properties of uranium fluorides, married Mabel Bernece Bailey, and came to Berkeley. He received a Ph.D. in chemistry in 1948.

While a graduate student at Berkeley, Lyon joined the research group of Nobel laureate William F. Giauque. Giauque had made a “proof-of-principle” test of his adiabatic-demagnetization technique for the production of temperatures below 1 K, and had put aside that research until he had the technical facilities to do it “properly.” Dave’s thesis work was on the thermodynamic properties of ferrous sulfate heptahydrate from 1 to 310 K. During World War II Giauque had also taken on a high-priority government project to create portable oxygen-generating facilities to treat and save the lives of poison gas victims at the front. Dave participated in that successful effort in important ways.

Following receipt of his doctoral degree in 1948, he stayed on with the Low Temperature Laboratory, except for a year at Bell Laboratories, overseeing the development and fabrication of new and more efficient equipment to produce liquid nitrogen, oxygen, hydrogen, and helium. In particular, he designed and supervised the construction of a uniquely large (4-inch bore) and strong (100,000 oersted) electromagnet, and supervised the installation of the associated power supply, a 9-million-watt DC generator and a 10,000-ampere transistorized current regulator. This high-field facility became the centerpiece of the Low Temperature Laboratory and made possible the conduct of research below 1 K in a fashion that met Giauque’s standards.

Some of Lyon’s accomplishments within the Low Temperature Laboratory were development and fabrication of an air separation plant that lasted over 30 years, a helium liquefier that served for over 20 years, and modification of a hydrogen liquefier built in the 1930s that extended its life into the 1960s. These activities turned into a regionally valued production facility, providing helium and other liquefied gases to Stanford University, the Lawrence Berkeley National Laboratory, the Lawrence Livermore National Laboratory, the Lick Observatory, several departments on the Berkeley campus, and several area industries.

David became a lecturer in the Department of Chemistry in 1954, lecturer in chemical engineering in 1958, and professor of chemical engineering in 1965. He was an extremely dedicated, effective and versatile teacher. He concentrated upon undergraduate teaching, although for years he also gave an elective graduate course in cryogenic engineering. In the undergraduate curriculum he taught interchangeably in thermodynamics, fluid dynamics and heat transfer, and the undergraduate laboratory. Students recognized and admired him as demanding and fair, and above all conscientious and capable. His teaching was recognized by the highly selective Distinguished Teaching Award of the Berkeley campus, which he received in 1978.

In research, David concentrated on two areas. His earlier research dealt with a variety of engineering issues surrounding the design and operation of high-field electromagnets for achieving ultra-low temperatures, in line with his efforts at the Low Temperature Laboratory. Starting in the 1960s, he developed an important line of research on nucleate boiling under cryogenic conditions. He authored very highly regarded reviews on the production of low temperatures, the liquefaction of gases, and nucleate boiling at very low temperatures. With loving care, he edited the three-volume series Low Temperature, Chemical, and Magneto Thermodynamics: the Scientific Papers of William F. Giauque.

David was a consummate problem solver and participant in University service. The College of Chemistry has always sought to provide stellar supporting functions for its faculty in the form of administrative services and shop and analytical services. When these activities were in need of immediate attention, organization, and improvement in the late 1960s, Dean Harold Johnston asked David to step in on short notice as assistant dean of the college, and David dutifully agreed to do it. During his tenure as assistant dean, which lasted until 1971, David accomplished a complete overhaul of college administration, financial control, and services. He paid deep and incisive attention to the college’s major needs and brought its activities to a new and higher standard of excellence. David established the system of cost centers and record keeping that continues to serve the college well. He also exercised much closer control on spending practices, turning a poorly monitored situation into one of sound budgetary control, while instituting sound procedures for management and training of college personnel. Those were also days of campus unrest, when security and safety of college facilities were a major concern. David instituted photo ID cards and a system of safety and security monitors.

David was a passionate and accomplished grower of roses, both in his own gardens at his homes in Berkeley and Moraga, and as “caretaker” at the Lake Park Retirement Center in Oakland, where he lived for some years. He was also a great fan of the Golden Bears football and basketball teams. They evidently valued his support: on one occasion he was able to get tickets for the Big Game, on the morning of the game, for a distinguished foreign visitor to the Low Temperature Laboratory. (This turned out to be the game that was won for Cal by the Stanford band.) He was also an accomplished handyman, a talent that served him well both in his work in the Low Temperature Laboratory and in overseeing the structuring and staffing of the shops of the college into first-rate facilities. He enjoyed hiking and camping with his family in the national parks of the West. He was an avid bridge player and a regular participant in the famous hearts game at The Faculty Club.

Dave’s first wife, Bernece, died in 1981, and his son, John, in 1986. He married Dorothy Johanson, who had been administrative assistant in the Low Temperature Laboratory in 1983. He is survived by his daughter, Louise Lyon Quenon, and Dorothy’s three children and five grandchildren.