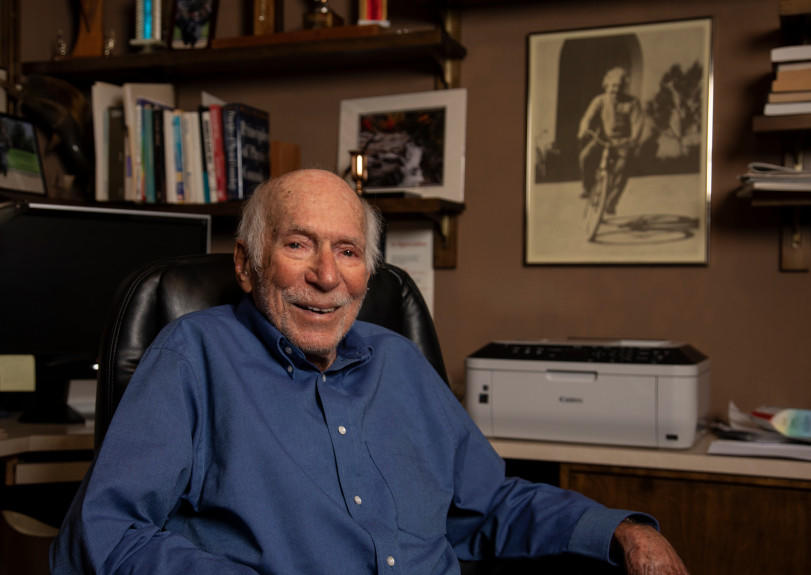 On the brink of his 100th trip around the sun, the secret to David Altman’s (Ph.D. '43, Chem) long and illustrious life isn’t rocket science. At least, not entirely.

“I just went with the flow, whichever way it went,” he said. “I had a good time, and I enjoyed myself!”

It’s a strategy that seems to have worked well for Altman, who will officially become a centenarian on Thursday. His dizzying number of accomplishments in rocket science — papers written, patents held, awards won — seem to indicate that not a moment was wasted in all of his one hundred years. His work helped advance the U.S into the space age, through the moon landings and beyond. Even in retirement, Altman continues his lifetime of curiosity and innovation, helping develop new fuel types that promise to make rockets safer and less environmentally harmful.

“It would be totally correct to describe him as a true American rocket pioneer,” said Brian Cantwell, a professor of aeronautics at Stanford and a colleague of Altman’s.

Altman recently spoke with the Mercury News from his home in Menlo Park, accompanied by his daughter Jan Altman, who affectionately refers to her father as “Popsicle.” 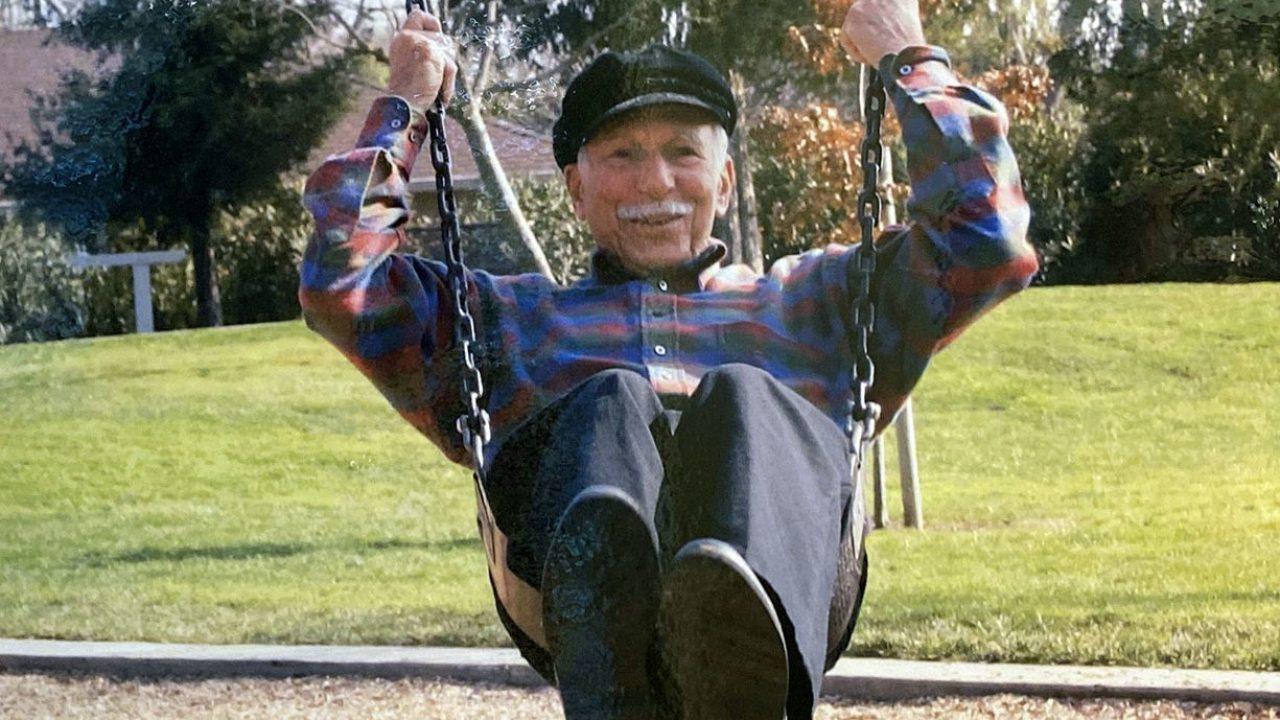 Though he’s lived in California for most of his life, Altman, who grew up in New York and attended Cornell University as an undergraduate, planned on sticking around the East Coast. But the head of chemistry at Columbia University warned him that anti-semitism was rampant among the staff there, and he should consider his second choice.

“He was very frank with me,” Altman recalled. “He said, ‘if you have an appointment (in Berkeley), I advise that you take it. You’ll be more comfortable there.”
So the flow of Altman’s life led him to California, where he crossed paths with Oppenheimer and Einstein. He earned his Ph.D. in chemistry at UC Berkeley in just three years and went on to contribute to the Manhattan Project.

“When I first went there, I didn’t know it was for a bomb,” he said. “I thought it was nuclear energy.” But like the other scientists, Altman pieced the truth together over time. He said Einstein knew the Manhattan Project was creating a bomb, too.

“That was a big thing: why should we work on a nuclear bomb?” he asked. “Well, it was going to be them or us.”

After World War II and his work with the Manhattan Project, he said his background in chemistry, physics and math could only lead to one place — “combustion, explosions and rockets!” 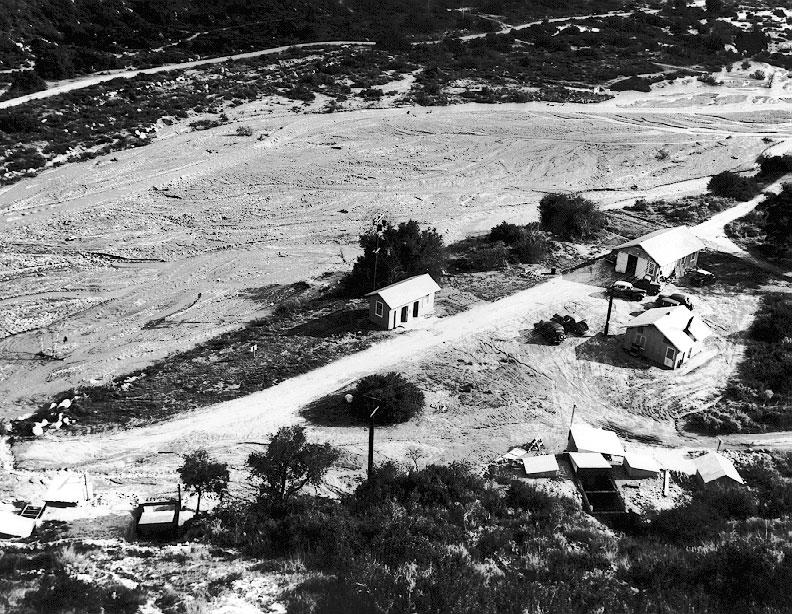 In Feb. 1942, there were only a few small buildings and rocket motor test pits on JPL's present site. Photo: JPL historic website.

Altman was a chief chemist at the Jet Propulsion Lab in Pasadena for a decade, starting in the mid-1940s, where he published scores of scientific studies focused on rocket propulsion. He eventually became vice president of a new division of United Technologies, called Chemical Systems Division, or CSD, in 1959. His work at CSD helped earn him the Apollo Achievement Award for his contributions toward the moon landing.

CSD was located in Sunnyvale, but also tested rocket motors at a carefully guarded site in Coyote Valley for 45 years until operations were moved to Florida in 2004. The property was sold to the Santa Clara County Open Space Authority in 2014.

“[CSD] built some of the largest rocket motors ever tested, and they played a key role in the development of boosters for all sorts of applications,” Cantwell said. “Dave was at the center of that until he retired.”

Though Altman retired in 1981, he remained an incredibly ambitious scientist.

“When I met him in 1994, he was 12 years into his retirement,” said Arif Karabeyoglu, a protege of Altman’s. “We worked together after that for another 25 to 30 years. He didn’t stop.”

Karabeyoglu was a student from Turkey earning his Ph.D. at Stanford when he and Altman first met. He said Altman motivated him to explore hybrid rocket fuels — a direction that has shaped his career for 25 years.

“He is one of the few guys in the world, maybe the only one who has actively worked in three types of chemical propulsion systems: solid, liquids and hybrids,” said Karabeyoglu.

Hybrid rockets manage to dodge some of the drawbacks of both liquid and solid rockets. Karabeyoglu describes solid rockets as “huge sticks of dynamite” — once the combustion starts, it’s impossible to stop. But hybrid rockets aren’t explosive until the solid and liquid fuels are mixed. That mixing can be controlled, providing an off-switch to combustion.

While serving on the committee that investigated the Challenger disaster in 1986, Altman realized that having an off-switch may have prevented the tragedy.

After some important breakthroughs, particularly the use of explosively-burning candle wax as a rocket fuel, which is safer to handle, and less toxic to the environment, Karabeyoglu, Cantwell and Altman decided to form a company specializing in hybrid fuels. At nearly 80 years old, Altman found himself as head of the Space Propulsion Group, running the company out of his home office in Menlo Park.

The Peregrine Hybrid Sounding Rocket motor underwent a developmental ground test at NASA Ames Research Center on November 12, 2013. This revolutionary approach uses a paraffin-based fuel and nitrous oxide as the oxidizer, which offers many potential advantages over existing rocket propulsion systems.  Stable and highly efficient combustion was achieved. The motor is being developed jointly by NASA Ames, Stanford University and SPG Inc.

“If you look at his career and his life, it’s amazing,” said Karabeyoglu. “He’s done pretty much everything in rocket propulsion.”

Karabeyoglu currently lives in Turkey but said he will be flying back to the U.S. for Altman’s 100th birthday. Cantwell will also be joining.

“Even now, we still talk about rockets,” Karabeyoglu said. “He’s almost a hundred years old, and I can tell you, he’s smarter than I am.”

These days, David Altman is still going with the flow, although a lifetime of playing tennis makes that a little harder on his knees. His office is filled with images and artifacts of his life. He admits some have gone missing, like the moon rock he was gifted after Apollo 11, or his gold plated shovel that broke the ground for the CSD facility in Sunnyvale.

But the real treasures fill every corner of his office and cover the walls of the hallway outside of it. A dashing photo of he and his wife, Beverly, on a 1946 trip to Yosemite. A goofy picture of him, gray-haired and dapper, grinning wildly on a swing, next to the words “a spontaneous homage to my youth.” And photos of his son and two daughters, including one with Jan in a frame that says, “To my favorite Popsicle.”

Karabeyoglu said it’s scientists like Altman — the ones who live quietly behind their accomplishments, the ones most of us haven’t heard of — that make things work and push things forward.

“They’re the heroes, right? We need to celebrate them, as much as we can.”

This story originally appeared in the Mecury News>(link is external)