From cyclotrons to wetsuits: A brief history of UC Berkeley’s scientific endeavors 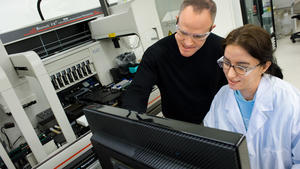 Over the past 150 years, UC Berkeley has been at the forefront of scientific discovery, achieving milestones that have impacted both the research industry and the surrounding community.

Notable figures and facilities across campus have engaged in and continue to engage in progressing the scientific realm of society, whether it be founding modern statistical theory, producing plutonium or inventing the first wetsuit.

The Lawrence Berkeley National Laboratory, which is managed by the UC and supported by the U.S. Department of Energy through its Office of Science, was founded by Ernest Orlando Lawrence, a UC Berkeley physicist who won the 1939 Nobel Prize for inventing the first cyclotron.

The cyclotron, a type of particle accelerator, helped pioneer the use of particle physics to uncover the structure of matter. According to the UC Berkeley website, the cyclotron has enabled the creation of large quantities of radioactive isotopes utilized in medical treatments.

“One of the greatest achievements of Lawrence Berkeley Lab and Ernest Orlando Lawrence was to recognize (that) very difficult, complex scientific challenges require teamwork,” said Ashok Gadgil, a senior faculty scientist at Berkeley Lab. “He set a tradition … of taking on extraordinarily difficult problems and solving them with teamwork acrossmultiple disciplines.”

The Keasling Lab, which has been part of Berkeley Lab since 1992, is another facility integral to Berkeley’s scientific endeavors. Researchers in the lab are affiliated with various campus departments, including bioengineering, chemistry and molecular and cell biology, according to the Keasling Lab’s website.

The lab’s long-term goal is to understand the production of organic chemicals, according to campus chemical engineering professor Jay Keasling.

“No. 1, we have trained a huge number of undergraduates, graduates (and) postdoctoral students,” Keasling said. “Many faculty were trained in my laboratory.”

In 2006, the Keasling Lab was able to engineer Escherichia coli, commonly known as E. coli, and a species of yeast to produce artemisinic acid, which can be converted to artemisinin and used to combat malaria.

The lab, which is partnering with Amyris Biotechnologies, has shipped approximately 51 million artemisinin combination therapies to Africa since 2014.

“Berkeley is a fantastic place because we are able to attract fantastic faculty,” Keasling said. “It’s an incredibly rich and creative environment that is unique to the world.”

Building a community of belonging
END_OF_DOCUMENT_TOKEN_TO_BE_REPLACED