Titanium dioxide and other metal oxides are widely used as bright white pigments and sunscreen agents, but they can cause damaging oxidation reactions that can degrade the materials the coatings were meant to protect. A new study shows that blending the oxides with cerium carbonate yields a potent antioxidation catalyst that prevents the unwanted reactions (ACS Appl. Nano Mater. 2021, DOI: 10.1021/acsanm.1c02128).

Previous attempts to stop these side reactions have included using an additional coating of a nonphotoactive mineral or adding select vitamins, other organic compounds, or enzymes that serve as antioxidants. But those solutions provide limited protection and can be expensive to implement. 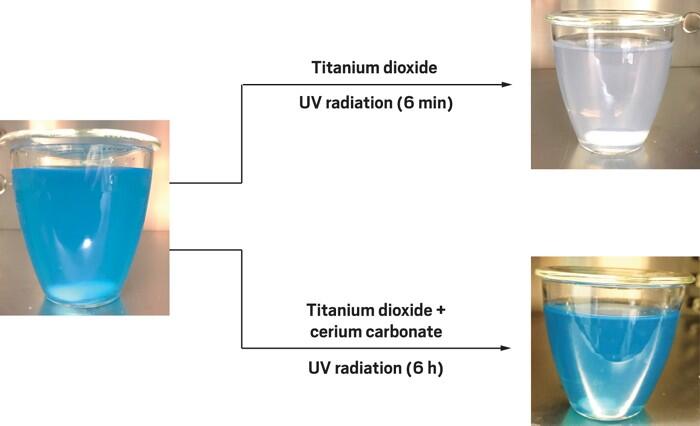 A team led by Manish K. Mishra and Professor of Chemical and Biomolecular Engineering Alexander Katz of the University of California, Berkeley, and James C. Bohling of Dow, took a different tack. After examining various additives, the team found that nanometer- and micrometer-sized cerium carbonate particles work in tandem with titanium dioxide to quench the harmful effects of the reactive oxygen species that form on exposure to light and drive these unwanted side reactions.

In one test, the researchers prepared an aqueous solution of methylene blue dye and a small amount of an industry standard form of TiO2 known to be highly photoactive. Six min of ultraviolet radiation destroyed 98% of the dye, turning the intensely colored solution colorless. When the team blended the solution with cerium carbonate, the rate of UV-triggered oxidation fell to 0.15% that of the original, and the solution’s color barely changed even after 6 h of radiation.

The researchers also evaluated commercial formulations of acrylic paint. They used industry standard accelerated testing conditions to simulate prolonged weathering of exterior painted surfaces. The results, which the team quantified with a spectrophotometer, show that after 4,500 h of exposure to test conditions, colorful paints modified with the cerium additive retained their colors up to three times as well as control paints lacking the additive.

Yaron Paz, a specialist in photocatalysis at Technion—Israel Institute of Technology, says that using cerium carbonate appears to be an elegant way of overcoming these photodegradation problems. More work comparing other protection strategies “might need to be done before commercialization, but at this stage the potential is there,” he says.

Paz expects the study to generate excitement among researchers studying photocatalytic fabrics and polymers, which can be used, for example, in self-cleaning or self-sterilizing textiles. He says that adding cerium carbonate to the interface between the photoactive material and the substrate may protect the substrate from damage without impeding the catalytic cleaning process.

The team has filed for patent protection and aims to commercialize the process.