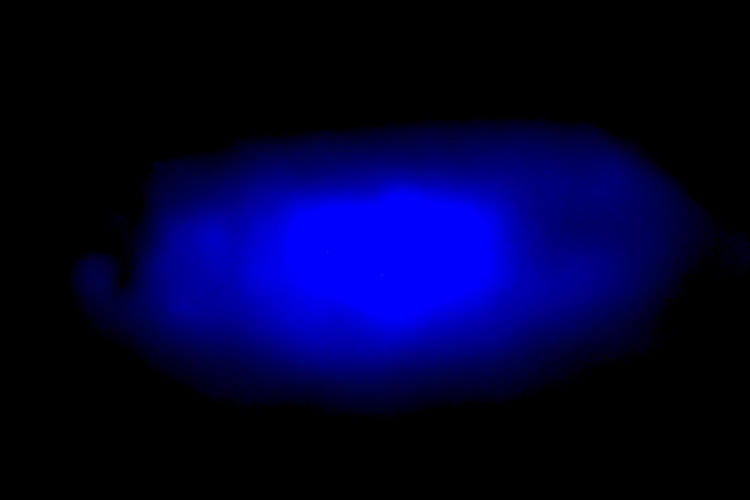 Above Photo: UC Berkeley chemists created a type of halide perovskite crystal that emits blue light, something that has been hard to achieve with the trendy new material. But the researchers also found that these materials are inherently unstable, requiring careful control of temperature and chemical environment to maintain their precise color. (UC Berkeley photo courtesy of Peidong Yang)

In the process, however, the researchers discovered a fundamental property of halide perovskites that may prove a barrier to their widespread use as solar cells and transistors.

Alternatively, this unique property may open up a whole new world for perovskites far beyond that of today's standard semiconductors.

In a paper appearing Jan. 24 in the journal Science Advances, UC Berkeley chemist Peidong Yang and his colleagues show that the crystal structure of the halide perovskites changes with temperature, humidity and the chemical environment, disrupting their optical and electronic properties. Without close control of the physical and chemical environment, perovskite devices are inherently unstable. This is not a major problem for traditional semiconductors.

"Some people may say this is a limitation. For me, this is a great opportunity," said Yang, the S. K. and Angela Chan Distinguished Chair in Energy in the College of Chemistry and director of the Kavli Energy NanoSciences Institute. "This is new physics: a new class of semiconductors that can be readily reconfigured, depending on what sort of environment you put them in. They could be a really good sensor, maybe a really good photoconductor, because they will be very sensitive in their response to light and chemicals."

Current semiconductors made of silicon or gallium nitride are very stable over a range of temperatures, primarily because their crystal structures are held together by strong covalent bonds. Halide perovskite crystals are held together by weaker ionic bonds, like those in a salt crystal. This means they're easier to make — they can be evaporated out of a simple solution — but also susceptible to humidity, heat and other environmental conditions.

"This paper is not just about showing off that we made this blue LED," said Yang, who is a senior faculty scientist at Lawrence Berkeley National Laboratory (Berkeley Lab) and a UC Berkeley professor of materials science and engineering. "We are also telling people that we really need to pay attention to the structural evolution of perovskites during the device operation, any time you drive these perovskites with an electrical current, whether it is an LED, a solar cell or a transistor. This is an intrinsic property of this new class of semiconductor and affects any potential optoelectronic device in the future using this class of material."

A big step toward ‘green’ ammonia and a ‘greener’ fertilizer
END_OF_DOCUMENT_TOKEN_TO_BE_REPLACED