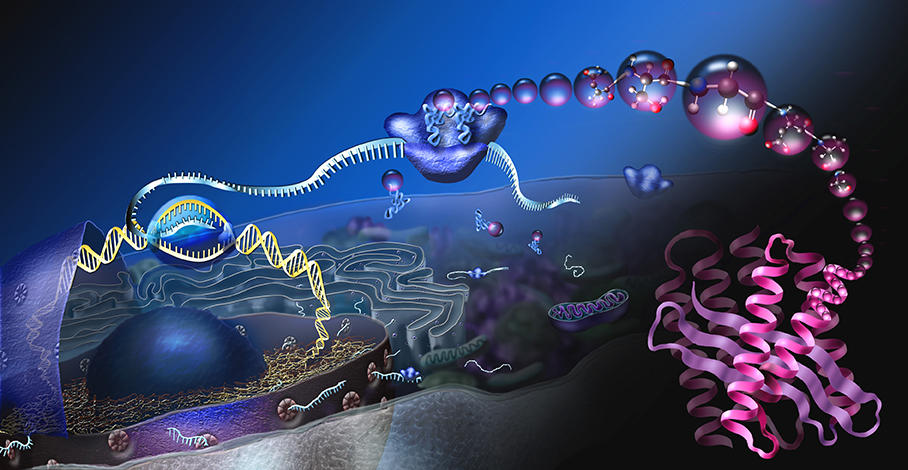 Artist's rendition of protein translation - the ribosome "reads" the messenger RNA code and links together amino acids into a chain that folds into a functional protein.  Image: National Science Foundation

A team of institutions led by UC Berkeley has been awarded a $20 million research grant from the National Science Foundation to pursue breakthrough technologies towards new medicines and innovative materials. The effort brings together a team of chemists, biologists, engineers, and data scientists to tackle a “Holy Grail” problem in the chemical sciences: how to synthesize truly sequence-defined chemical polymers, oligomeric molecules possessing both a pre-determined, diverse sequence, and a defined length.

“Nature already knows how to synthesize sequence-defined chemical polymers,” says Alanna Schepartz, T.Z. and Imgard Chu Distinguished Professor of Chemistry at UC Berkeley. “We call these molecules protein, DNA, and RNA, and the sequence definition here translates into unique structures and functions that support life. But from a chemical standpoint, the monomer choices defined by nature are so, so limiting.”

C-GEM seeks to synthesize sequence-defined polymers using the cell’s natural protein-making machinery: the ribosome. Ribosomes biosynthesize natural proteins using adapter molecules known as tRNAs that deliver alpha amino acids – the monomeric beads of a protein necklace – in a precise order defined by the cell’s DNA. The C-GEM research will develop tRNAs that deliver new monomers, ribosomes that support novel bond-forming reactions, and catalysts that further increase the diversity and function of the resulting polymers. New molecular necklaces that combine the diversity of a plastic with the sequence-definition of a protein.

“This ambitious Center synergistically blends several fields of chemistry to bring a whole new level of precision and function to polymer construction,” says Dave Berkowitz, Division Director for the Division of Chemistry at the National Science Foundation. “Their effort to ‘co-opt the ribosome’ has the potential to transform polymer synthesis as we know it and to elevate the complexity that can be precisely programmed into polymer design.”

Schepartz envisions that one day cellular factories will make never-before-seen materials, like a fabric combining the strength of Kevlar and the sheerness of Nylon, perhaps even embedded with a small molecule sensor; or natural-product-like antibiotics that have never before existed in nature, and even molecules whose functions can be coded on demand.

For further information regarding this new center, contact Sarah Smaga 248-838-8712 or smaga@berkeley.edu