Chemistry Professor Robert Bergman has been named the 2014 recipient of the Welch Award in Chemical Research for “pioneering work in alkane activation and mechanisms of organometallic reactions.”

The Houston-based Welch Foundation is one of the nation’s oldest and largest sources of private funding for basic research in chemistry. The foundation also cited Bergman’s vital contributions to the understanding of organometallic chemistry and particularly carbon-hydrogen bond activation and its application to drug development and cleaner energy.

“Bob Bergman is a trail-blazing researcher whose interdisciplinary and collaborative approach to science has led to significant contributions to chemistry throughout his career,” said Marye Anne Fox, chair of the Foundation’s Scientific Advisory Board and a former UCSD Chancellor.

“He was a pioneer in taking the methods and reasoning of physical organic chemistry and using them to help grow the new field of organometallic chemistry, where mechanistic insights were not always obvious until revealed by his work. His work has revolutionized the field of C-H activation, one of the most important in chemistry, and he continues to expand our insights in this area, providing the foundation of organometallic chemistry as we know it today.”

Growing up in Chicago, Bergman attended Carleton College where he edited the college newspaper and considered being a journalist before finally settling on chemistry as a career. He earned a doctorate in chemistry from the University of Wisconsin-Madison and was a North Atlantic Treaty Organization fellow at Columbia University.

He spent 10 years on the faculty of Caltech before moving to Berkeley where he is now the Gerald E. K. Branch Distinguished Professor.

The author of more than 500 papers, he has been recognized with numerous American Chemistry Society awards as well as the E. O. Lawrence Award in Chemistry from the U.S. Department of Energy and teaching excellence awards from both Caltech and Berkeley. He has served in many academic and research leadership roles, on editorial advisory boards and had been active in outreach programs in local K-12 schools.

In probably his most noted achievement, Bergman created the first transition metal complex capable of breaking carbon-hydrogen bonds by inserting the metal in between the carbon and hydrogen atoms. This works even for simple compounds such as alkanes, which contain only carbon-carbon and carbon-hydrogen bonds and are significant components of petroleum and natural gas. He then further studied the fundamentals of this class of reactions and applied his findings to problems in organic synthesis.

In another important early breakthrough, Bergman studied enediynes, a class of bacterial natural products, and discovered a transformation, called the “Bergman cyclization,” that was later identified as a first step in a process that damages DNA in tumors. Thanks to this insight, today hundreds of synthetic enediyne compounds are being tested as cancer drugs.

Says Bergman, “I have found much joy in science, both in advancing fundamental human knowledge, and in the training of future scientists and informed citizens. Collaborations have been critical to my success – science today is so far-reaching that none of us can hope to master an area alone – and I’ve loved applying this in my teaching, both at the undergraduate level and with my research group. I’m very proud of the 220 or so students I’ve mentored and they are continually surprising me with their discoveries and contributions to the next generation of science.”

Bergman and his wife Wendy have two sons, David and Mike, and two grandchildren.

The Welch Foundation advances science through research and departmental grants, funding of endowed chairs, an annual chemical conference and support for other chemistry-related programs. Since its founding in 1954, the foundation has contributed more than $772 million as part of its mission to support the basic chemical research that improves life. 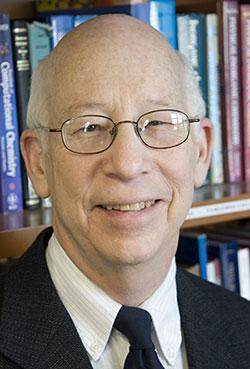