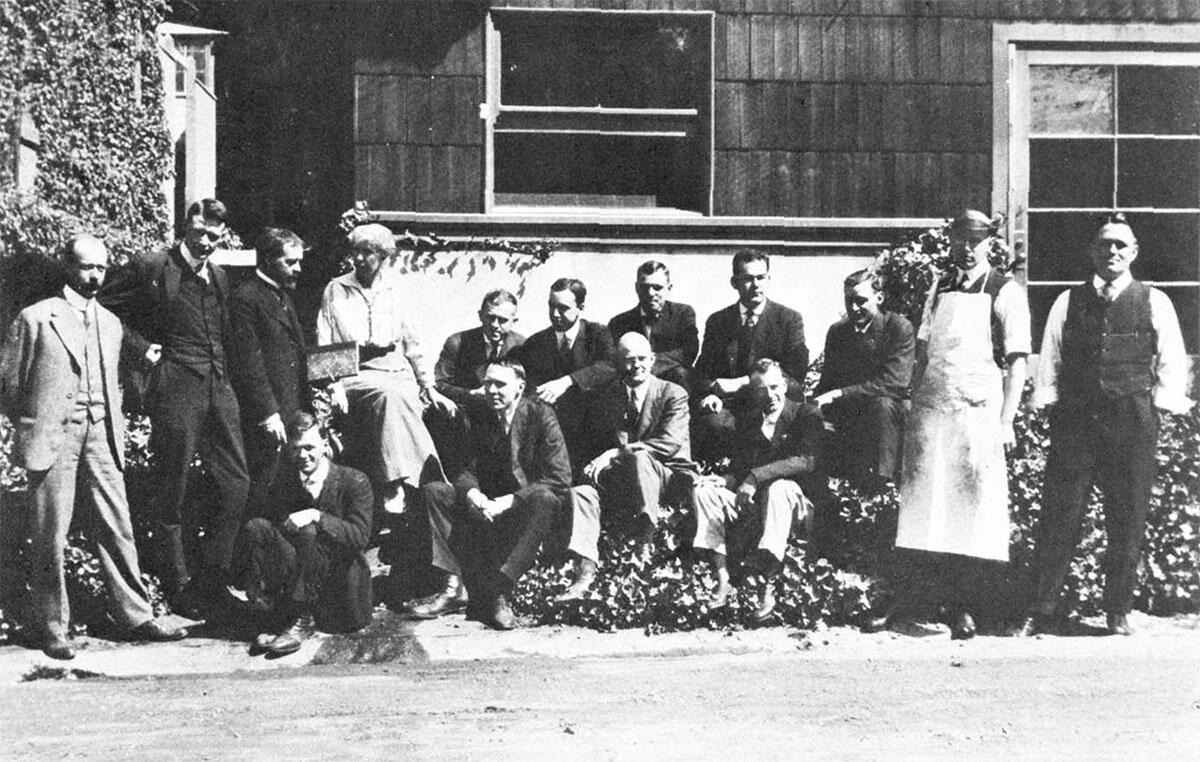 College of Chemistry faculty in 1917. Axel Olson is seated on the left in the front row. 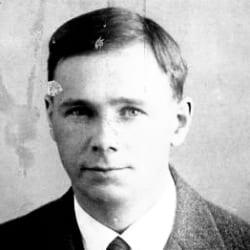 Axel Ragnar Olson, Professor of Chemistry at the University of California, died December 22, 1954. He had been in failing health for some time and as a result had retired from active duty as of July 1, 1954. The last months were devoted to the task of preparing several papers based on his research work. He is survived by his wife, Hanna Kinell Olson, whom he married in 1919, and two sons, William and Peter.

Professor Olson was born in Hälsingborg, Sweden, on February 6, 1889. He was brought to this country by his parents in 1891 and grew up in the Middle West. After a brief period in the photoengraving industry he entered the University of Chicago, where he graduated in 1915. He continued his studies at the University of California and completed the work for his doctorate in 1917. During 1918 and 1919 he served as a Lieutenant in the Chemical Warfare Service of the Army, A.E.F. After the war he returned to the University of California as a Fellow of the National Research Council. In 1922 he was appointed Assistant Professor of Chemistry. He became Associate Professor in 1926 and Professor in 1930. The year 1929-1930 was spent in Europe on a Guggenheim Fellowship. He was a member of the American Chemical Society, American Association for the Advancement of Science, American Association of University Professors, Phi Beta Kappa, Sigma Xi, Alpha Chi Sigma, Alpha Sigma Phi, and the Faculty Club.

In research, Professor Olson displayed a wide variety of interests.In his early years on the staff he was influenced by the growing interest in radiations. As a result, he studied the effects of the bombardment of various substances with electrons and X rays. Particularly outstanding in this field were the studies (with Professor T. H. Goodspeed) of the variations produced in the Nicotiana species by radiation with X rays and the study of the effect of X rays upon bacteriophage and the bacterial organism. During the period of his Guggenheim Fellowship, he became interested in the rates and mechanisms of reactions. In this field he was interested in both photochemical and thermal effects. His experimental work was designed to test theoretical concepts, and was carried out with a thoroughness which characterized all his work. He obtained evidence that in organic reactions in which strong bonds are broken, there is usually a primary inversion around the substituted carbon to yield an enantiomorphic form. This process was studied for several typical reactions in a searching experimental and interpretative analysis. He also presented an explanation of the mechanism of the interconversion of geometrical isomers in terms of potential barriers. His precise studies of salt effects on both rates and equilibria have stimulated new theoretical studies of these phenomena.

In teaching, Professor Olson was noted for the stress he laid on fundamental principles. This was true both in the course in thermodynamics, which he taught for many years, and in the elementary course in quantitative analysis which he took charge of after the retirement of Professor Blasdale. The ideas which he developed in the latter work were collected in a text prepared in collaboration with his associates. His research activities attracted many graduate students of high caliber. In this group were included Professors H. C. Urey and T. F. Young, now at the University of Chicago; Professor F. A. Long, Chairman of the Chemistry Department at Cornell University; Professor Ralph Halford, of Columbia University; Dr. George Glockler, formerly head of the Chemistry Department at the University of Iowa; and many others who have distinguished themselves in industrial positions.

Professor Olson also served the University as a member of many committees. Particularly outstanding in this field was his work as Chairman of the Committee on University and Faculty Welfare, which came at a time when he was also President of the local section of the American Association of University Professors. In this dual capacity he initiated the steps which led to a great improvement in the retirement system for the faculty.

In his social life Professor Olson reflected his interest in his students and colleagues as people. His friendly nature and congeniality led to frequent informal entertainment in his home. On these occasions visitors in the area were particularly welcome and were given an opportunity to meet fellow students and colleagues. Professor Olson will be remembered by many as a friend as well as a scientist.