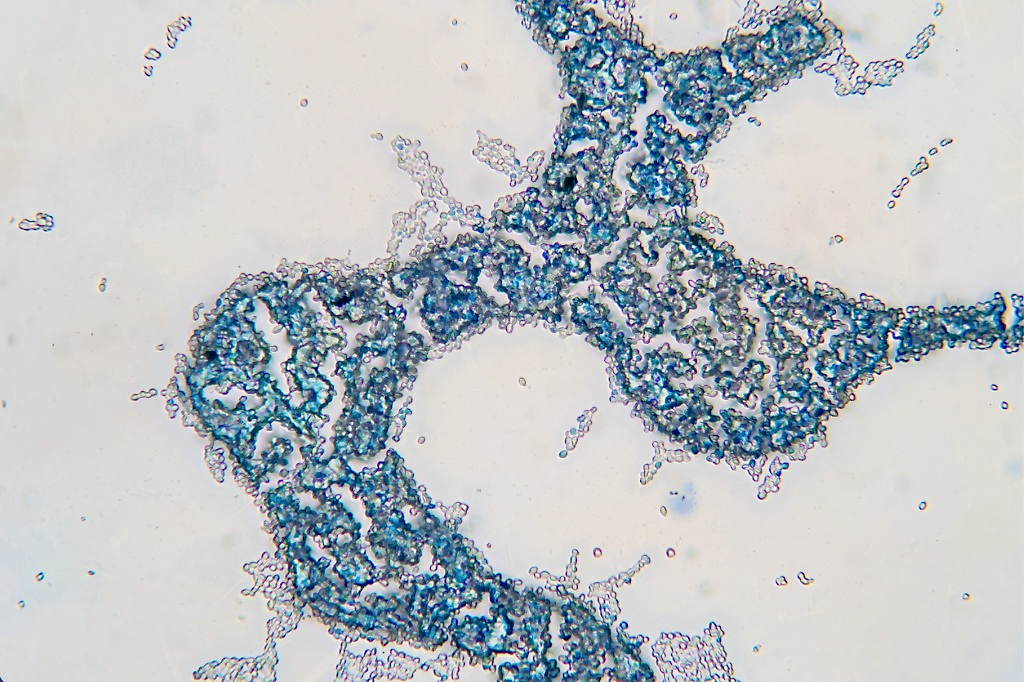 Saccharomyces cerevisiae, also known as brewer’s yeast, is seen under a microscope. This species is used around the world to make food and beverages. Easily cultured with a well-known genome, the species has also become a favorite of synthetic biologists for making natural products that are difficult to obtain from their native sources. (Credit: tonaquatic/iStock)

The supply of a plant-derived anti-cancer drug can finally meet global demand after a team of scientists from Denmark and the U.S. engineered yeast to produce the precursor molecules, which could previously only be obtained in trace concentrations in the native plant. A study describing the breakthrough was published today in Nature.

“The yeast platform we developed will allow environmentally friendly and affordable production of vinblastine and the more than 3,000 other molecules that are in this family of natural products,” said project co-leader Jay Keasling, a senior faculty scientist at Lawrence Berkeley National Laboratory and scientific director at the Novo Nordisk Foundation Center for Biosustainability (DTU Biosustain). “In addition to vinblastine, this platform will enable production of anti-addiction and anti-malarial therapies as well as treatments for many other diseases.” Keasling is a biochemical engineer who helped launch the now-booming field of synthetic biology when his team successfully transferred the genetic pathway to produce an antimalarial drug, artemisinin, from an herb called sweet wormwood to the laboratory workhorse microbe, E. coli. He is also a professor of Chemical & Biomolecular Engineering at UC Berkeley. 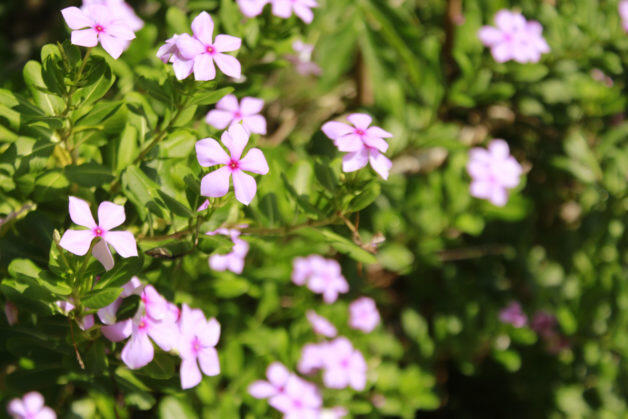 Vinblastine and another chemotherapy agent, vincristine, are both natural products of a pink-flowered plant called the Madagascar periwinkle. Their anti-cancer properties were first discovered in the 1950s, and in the decades since, they have become essential medicines. Vinblastine, which inhibits cell division, is used alongside other chemotherapy agents to treat multiple types of cancer, including lymphomas, testicular, ovarian, breast, bladder, and lung cancers. Vincristine inhibits white blood cell production and is a mainstay treatment for childhood lymphoblastic leukemia and non-Hodgkin lymphomas.

Vinblastine and vincristine belong to a group of botanical compounds called monoterpenoid indole alkaloids (MIAs) that have many useful medical applications. Unfortunately, this group is characterized by complicated atomic structures that are often impossible to replicate through synthetic chemistry. So, much like the production of artemisinin before Keasling’s breakthrough, making vinblastine and vincristine requires growing and harvesting huge quantities of the native plant to extract precursor molecules. It takes 500 and 2,000 kilograms of dried Madagascar periwinkle leaves to produce one gram of vinblastine and vincristine, respectively.

A team lead by Keasling and Michael Jensen, a DTU Biosustain researcher, began exploring the possibility of engineering a microbe-based production process for MIAs in 2015. The first step was to develop the pathway for making strictosidine, the foundational molecule that all monoterpene indole alkaloids are built from. For the new host organism, they turned to a common yeast strain that Keasling and others have successfully engineered to make many other plant-derived compounds including opiates, cannabinoids, and other anti-cancer drugs. (It’s also the same yeast humans have been using for centuries to brew beer and make bread.)

After meeting their goal of making strictosidine, they set out to produce vinblastine. They chose to start with this particular MIA-based drug because it is one of the most commonly used chemotherapeutics worldwide and it has been in shortage multiple times in recent years.

Yet even with the team’s vast combined expertise in their favor, they knew that making a monoterpenoid indole alkaloid was going to be a grand challenge.

“The 31-step vinblastine biosynthetic pathway, which wasn’t fully elucidated until 2018, is remarkably complex,” said first author Jie Zhang, a senior researcher at DTU Biosustain. “This study showcases the longest biosynthetic pathway refactored into a microbial cell factory to date, including 30 enzymatic steps to convert two molecules naturally made by the yeast into catharanthine and vindoline – the precursors of vinblastine.” To obtain a strain that could produce these molecules consistently and in sufficient quantities, Zhang noted that a total of 56 genetic edits were performed, including the addition 34 plant genes and multiple deletions, knock-downs (reductions in gene expression), and overexpression (boosting gene expression) of native yeast genes. 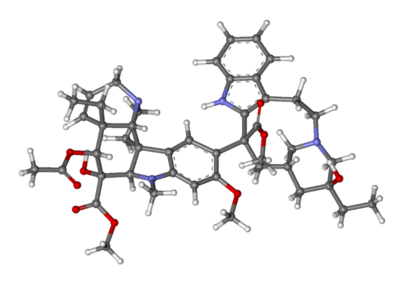 A ball and stick molecular model of vinblastine showing its complex structure with many carbon rings. (Credit: MarinaVladivostok/Creative Commons)

Now that they have unlocked the process for strictosidine and vinblastine production, the team hopes to modify their yeast to tackle production of other valuable MIAs, including vincristine, irinotecan, and topotecan. All four medicines are chemotherapies on the World Health Organization’s essential medicines list.

“The pathway could also be augmented to produce new-to-nature MIAs, which may have improved pharmacological properties such as higher efficacy or fewer side effects,” said Zhang. “This will potentially enable us to explore the almost infinite chemical space with many new bioactivities.”

This study was supported by grants from the Novo Nordisk Foundation and the European Commission’s Horizon 2020 program. Berkeley Lab is supported by the Department of Energy Office of Science.